There are many US corporate numbers out today.  Here is the key presentation pack graphic and an accompanying share price graph from three of them.

First, Kellogg's.  Have you seen their share price chart?  It is an ugly looking one.

And the reason for this?  Add up all the usual issues regarding fickle consumers impacted by austerity plus investments by the company in brand building and the like and you end up with this as a prediction for 2014: 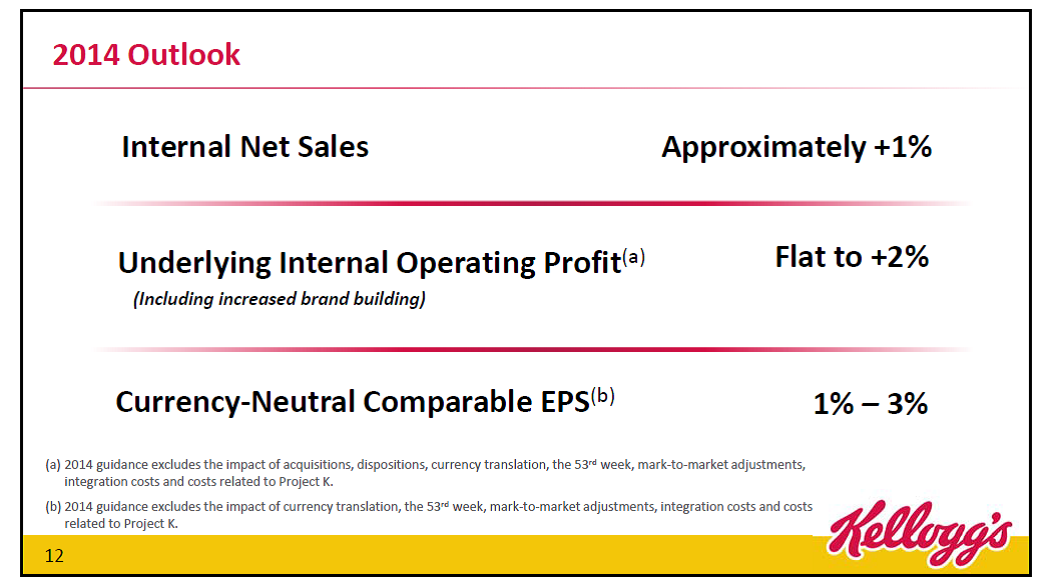 How dull.  And judging by the above the actual EPS is subject to potential currency volatility too.  The share is a useful 3%+ yielder but at still above x13 EV/ebit it is not yet obvious value.  That starts to potentially kick in at US$53 where I note some technical support too.  I am currently short the stock and would augment that position at US$60.
Disney had - in the words of the CEO - 'an incredibly strong first quarter'.  You can see that in the numbers below, especially in the operating income leverage.

Disney's share has also powered back to the highs seen at the start of the year.  Using the above metrics, for the company's fiscal 2014, Disney trades on x11.5 EV/ebit with a 5%+ free cash flow yield (1.2% paid out).  Inevitably there will be wiggles along the way - and the comparison base is going to get more difficult - but I am raising my two buy levels from this note to first US$70 and then US$65.
﻿

Finally, General Motors.  The numbers were widely reported as a large miss by the financial press and versus consensus this was true.  The share has turned around today though and is now trading up on the day, possibly because it has struggled over the last couple of months and is back in the mid US$30s support level.

So what did the numbers actually say?  Well the North America side remains dominant in terms of profitability.  Incentives within this market remain under control too. Overall though one clear positive and negative stood out for me.  The good news was the pricing power...the less good news was the preponderance of 'other' (which inevitably is a large negative), the large pension deficit (US$27bn unfunded = half the EV!) and the big difference between GAAP and non-GAAP earnings. 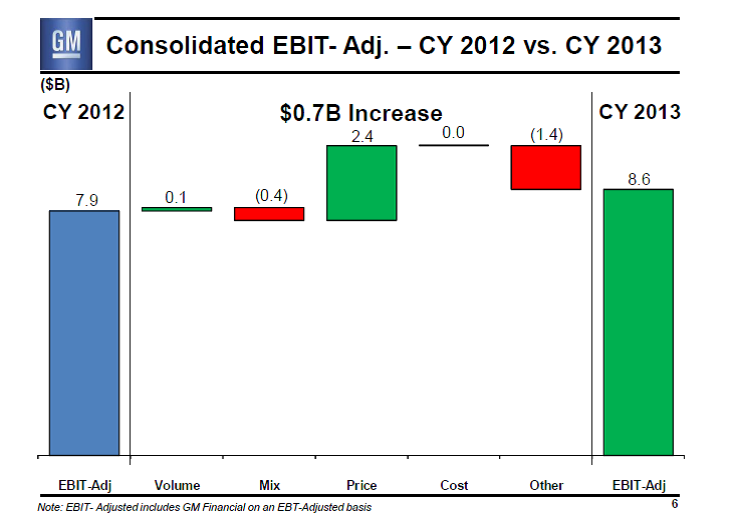 GM remains a consumer confidence play for me.  I note the US$34 support level that the share is now only 3%+ above.  I am still thinking in the global auto space about companies like Daimler, whose numbers in Europe I briefly wrote up earlier today (see here).