For Akzo Nobel  - the owner of the Crown and Dulux decorative paints brands (as well as material other industrial coatings businesses), Q4 was better on a year-on-year basis across most metrics... 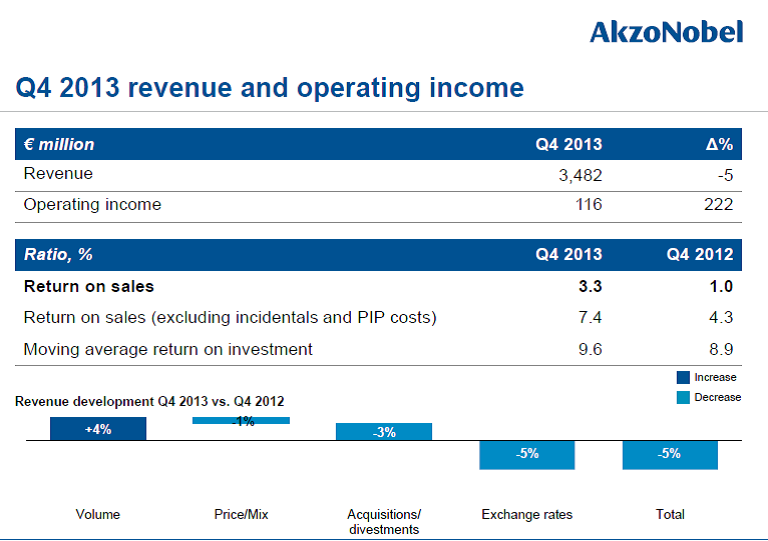 ...but pricing remained negative across the company due to the chemicals business.  And the key comment from the company ‘fragile economic environment and volatile currencies, but on track to deliver 2015 targets' has something for everyone.

Akzo Nobel remains a turnaround hope but at x14 FY13A EV/ebit much of this is priced in, hence the more sideways movement of the shares over the last few months.  Have another look in the mid Euro40s.

Daimler shares have had a strong last nine months

Judging by the sales rhetoric about 2014 you can see why...I cannot remember a time where an industrial company (particular an auto company) has talked about 'significantly higher unit sales' for the totality of its range: 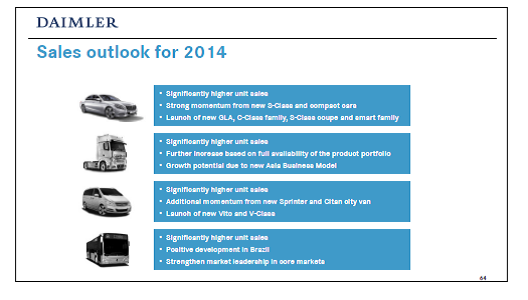 Of course not everything can be this rosy.  Group ebit did, on an underlying ex one-off benefits basis, go down in 2013 year-on-year.  Note though - in contrast to Akzo Nobel - the strong pricing power (and almost offsetting restructuring spend). 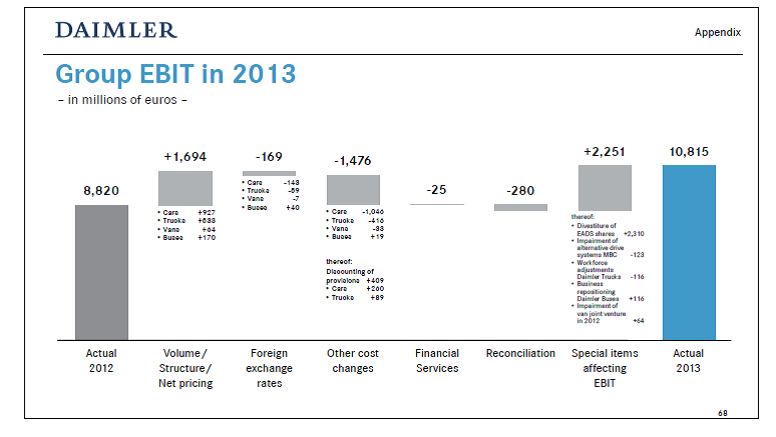 Classically I am not a fan of the auto manufacturers for investment (too many fixed costs) but judging by the chart above Euro60 might turn into a support level.  Even though it has doubled in two years, worth some further thought.

Another broad automotive sector name is Volvo who competes with Daimler in the trucks and buses area (the car division having been managed separately by General Motors and ultimately sold earlier this year to the Chinese).

Volvo shares have had a volatile last year - and certainly provided a good 'law of round numbers' shorting opportunity at SEK100.

I was struck though by how the presented its numbers.  First, the front page was terribly mixed with good news on cash flow countered by bad news on high restructuring, a cut dividend and falling margins. I have added to my (small) short position today at SEK90+ and will augment this at both SEK95 and SEK100 all other things being equal. 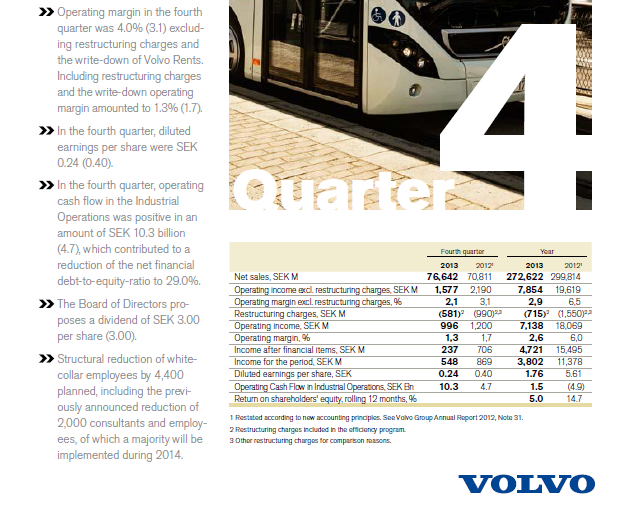 Correctly the company defines 2014 as:

In plainer language this means job cuts...and more restructuring spend.  Even a return to 2012 profitability would put the company on x12 forward EV/ebit and despite the attractions of the (still) 3%+ yield, that is too rich for me even if the product range is being renewed.  The trouble is I don't think the global economy is strong enough for the 'double leveraged' trucks etc. market to perform in a consensus-busting fashion.