UBS - zero to hero. Numbers good but not flawless

UBS went from zero to hero in the last quarter.  Back in late October I posted (link here) on the company after its disappointing Q3 update which focused on the negative impact on its 2015 targets from more regulatory burdens imposed by the Swiss authorities.  Today the company beat expectations for Q4...and raised the dividend by 65% (admittedly to only CHF0.25 or just under 1.5% yield) and 2013 bonus pool by nearly 30% year-on-year.  As Bloomberg noted:

'UBS today reported a fourth-quarter profit that beat analysts’ estimates as the company didn’t increase provisions for litigation matters and booked a tax gain in the quarter. The bank posted net income of 3.17 billion francs for 2013 compared with a 2.48 billion-franc loss for the year earlier.
“In the last two years, the variable compensation pool was massively reduced,” Chief Executive Officer Sergio Ermotti said in an Bloomberg Television interview. “This year we had a very strong year. If you normalize, everybody is benefiting.” '

Moving away from litigation provisions and tax distortions, what was striking about the numbers was that they were driven predominately by (unsurprisingly) the global Wealth Management franchise but also the Investment Bank where profits went up over five time the 2012 full year level. Of course the latter is unsustainable (note the return on equity target for example) and - in any case - UBS made a big splash about reducing the size of the investment bank a few quarters ago. 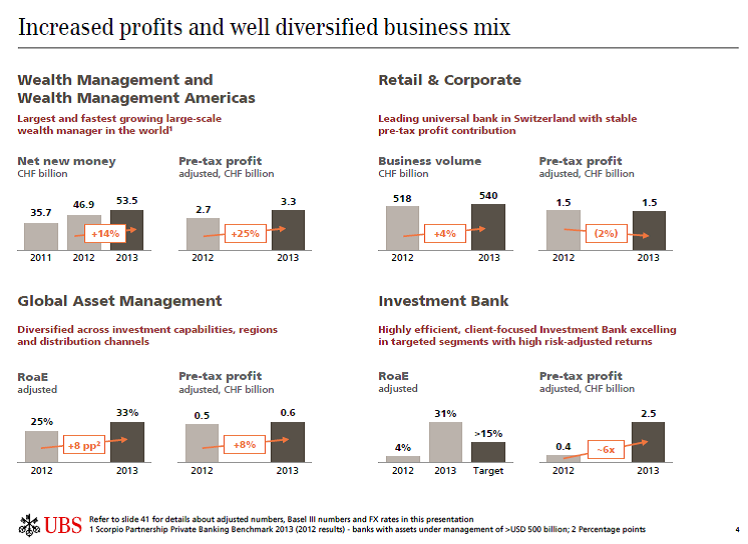 The Wealth Management numbers though were not flawless.  Net new money may have reached levels not seen before the global financial crisis, but flows were very Asia-centric.  Europe, Switzerland and the emerging markets all saw sequential falls in flows.  Similarly margins overall only edged up: by no means is there a discernibly positive trend in gross margins. 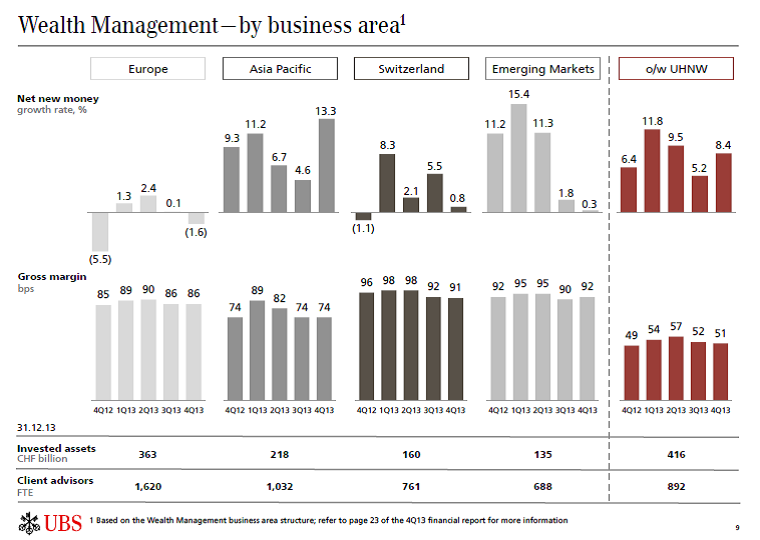 Back in October I talked about the interesting CHF16 level seen in July.  The share almost got there in December but has rallied since.  Given some of the progress above plus the positive news re the dividend (which they ultimately hope to move from a 30% pay out ratio to a 50% pay out ratio) as regulatory capital builds further, I would amend that to 'the CHF16s' today.