In December, shares in the energy company Anadarko had a sharp fall following a legal defeat in their Tronox legal case relating to liabilities left with a company they spun-out which ultimately went bust.

I posted about this event here and concluded that:

'What is the present value of a mid-point US$10bn given a few years of inevitable legal wrangling.  US$7bn?  Deduct that off Anadarko's market cap at US$85 a share and you get a share price of around US$73 (adjusting for the provision the company already holds).  Clearly a settlement better (worse) than this level would have an impact on the shares, but as a rough indicator going forward, it has worth'.

Anadarko posted their full year numbers yesterday.  Did they add anything to this debate?  As Seeking Alpha noted:


'Q4 EPS of $0.74 misses by $0.18.Revenue of $3.34B (-2.1% Y/Y) misses by $460M. Shares -2.8%...unadjusted earnings swung to a Q4 loss on contingent losses linked to a legal dispute related to the company's 2006 acquisition of Kerr-McGee.  APC believes the costs of claims related to its Kerr-McGee subsidiary - which eventually was spun off into Tronox - could range from $850M-$5.2B, although its reported Q4 loss accounted for a payment of just $850M; a federal judge has ruled APC could be liable for more than $14B'
This was the dichotomy at the heart of the numbers.  The headlines were blunted by Tronox-related matters but scrape below the surface and the numbers were actually quite solid, especially relative to other energy names who have struggled to put growth on the table and monetise their assets. 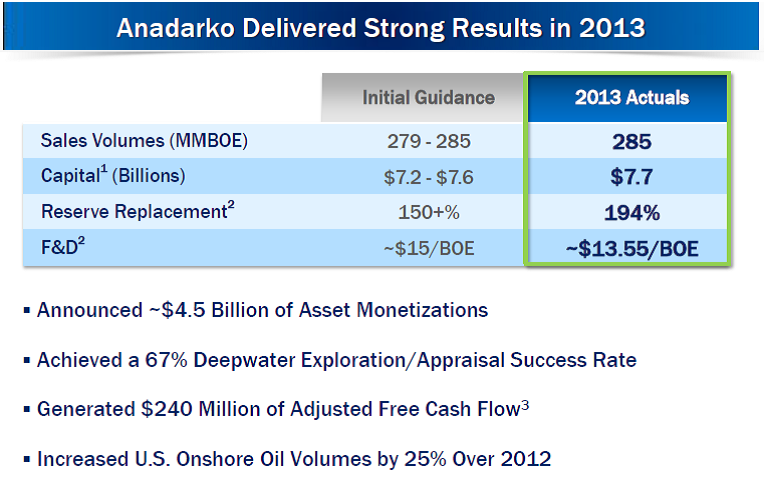 Regarding the legal dispute, I still err on the side of caution and await the US$73 level where I feel a more prudent (fuller) valuation is discounted.
﻿
Posted by Chris Bailey at 14:20

Email ThisBlogThis!Share to TwitterShare to FacebookShare to Pinterest
Labels: energy