Sony has been an unusual performer.  As Seeking Alpha noted, there was good and bad news in the numbers released yesterday: 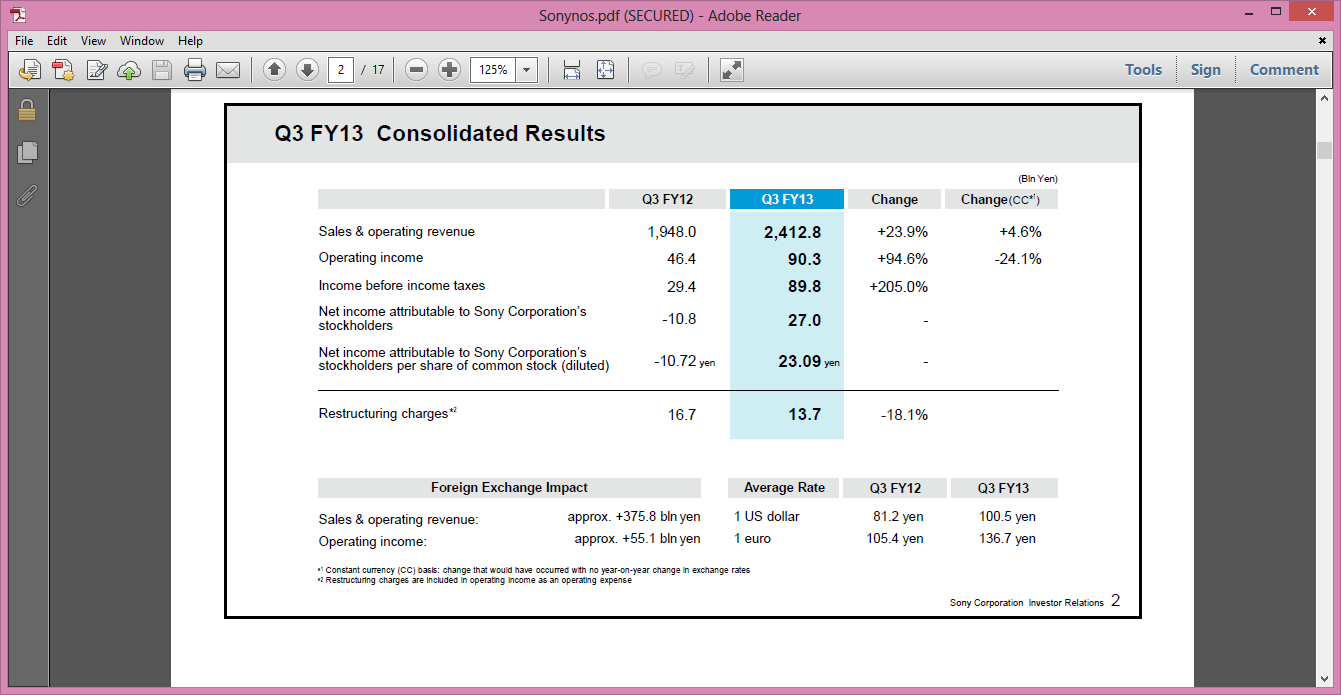 And why the big restructuring?
'Sony intends to cut 5,000 jobs by the end of the year as part of a plan to save ¥100B a year in fixed costs. The company will take restructuring charges of ¥70B this FY, up ¥20B from a forecast in October. As a result, the firm projects a fiscal-year loss of ¥110B after earlier predicting a profit of ¥30B'
And then there's the deal they announced too:
'Sony intends to spin off its flagship TV business, which has lost $7.5B over the past decade, into a separate wholly owned unit by July this year.  Sony has also agreed to sell its struggling Vaio PC business to restructuring specialists Japan Industrial Partners, although Sony will initially retain a 5% stake in the unit'

That is quite a lot of 'progress'.  After being called down 3-5%, the share finished US trading up 4% -  a move replicated in Japan this morning (Friday).  Despite these moves, the shares (US quote) have retraced materially from the mid-Summer highs of last year.

Clearly the below results split is going to simplify. 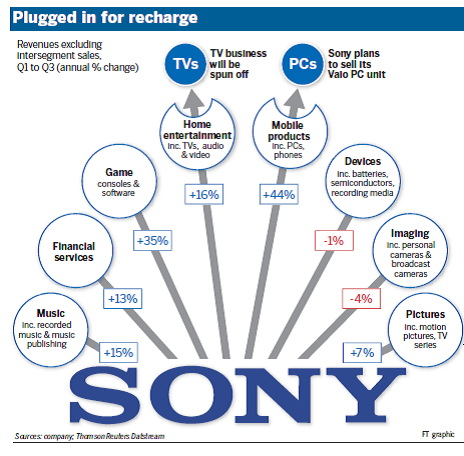 Back in November at the time of the (partially inspired by activist Sony shareholder Dan Loeb) investor day which focused on the Pictures and Music divisions I noted that:

'Pictures at a hoped for 7.5% operating margin and Music at 9.5% in 18 months time.  What were they during Sony's H1 2013-14 period (the 6 months to the end of September 2013)?  -4.2% and 9% respectively.  So all the big gains are from the Pictures division. Now the cost-cutting alone - and not losing a lot of money on poor film releases - should push the company back into the black in the Pictures division.  A 7.5% margin though is a pretty good target.  It is do-able judging by the peers'

The results released yesterday showed the Music division (in the first 9 months of Sony's 2013-14 year) at a barnstorming 11.3%, whilst Pictures remains in turnaround mode at a margin of 1.8%.  This reflects some improvement from the half-year stage.  If I look forward and apply the guided margins in December I get a valuation of at least Y1000bn for these two divisions alone (valuing the oligopolistic Music division at x12 forward ebit and the recovering Pictures at x10). 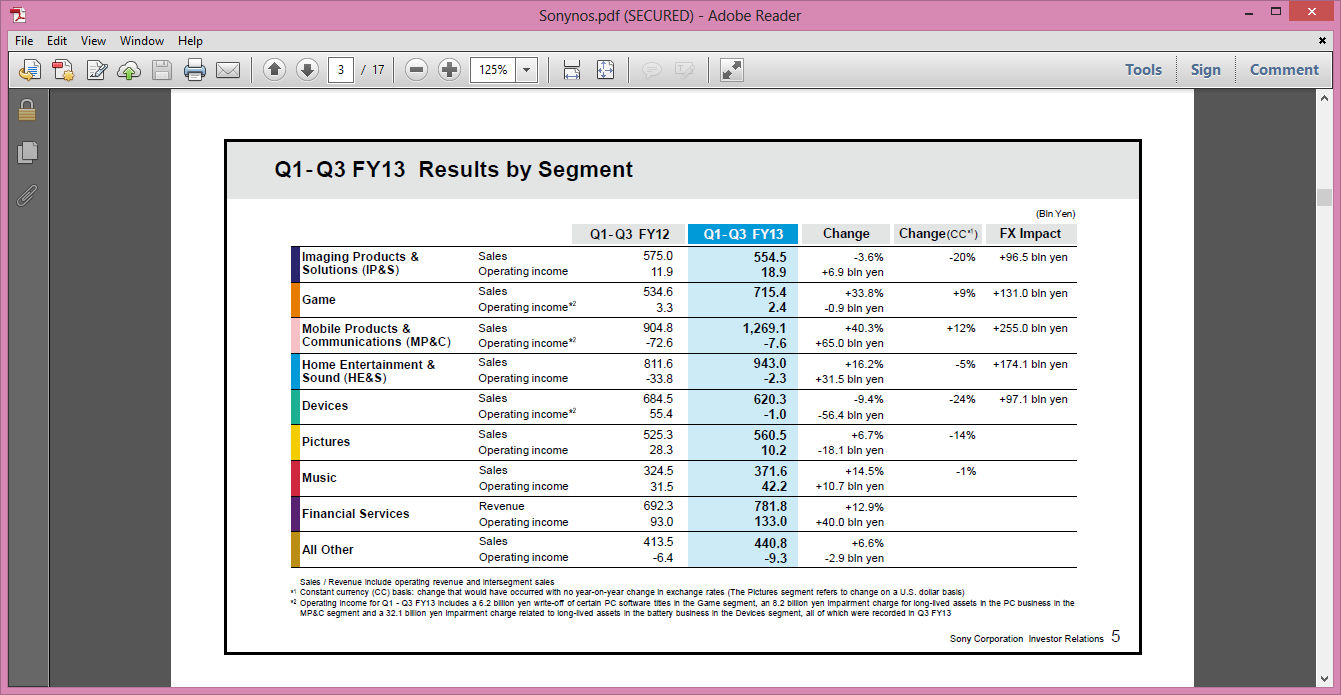 Then there is the financial services division...the quiet profit generator that at just x6 forward ebit would also be worth about Y1000bn.

And then we have everything else.  Sony is doing the right thing with the spin-off and restructurings...but all of this - taking the five electronics segments in aggregate - are still struggling to be collectively profitable, even with the shown-below weak Yen boost. 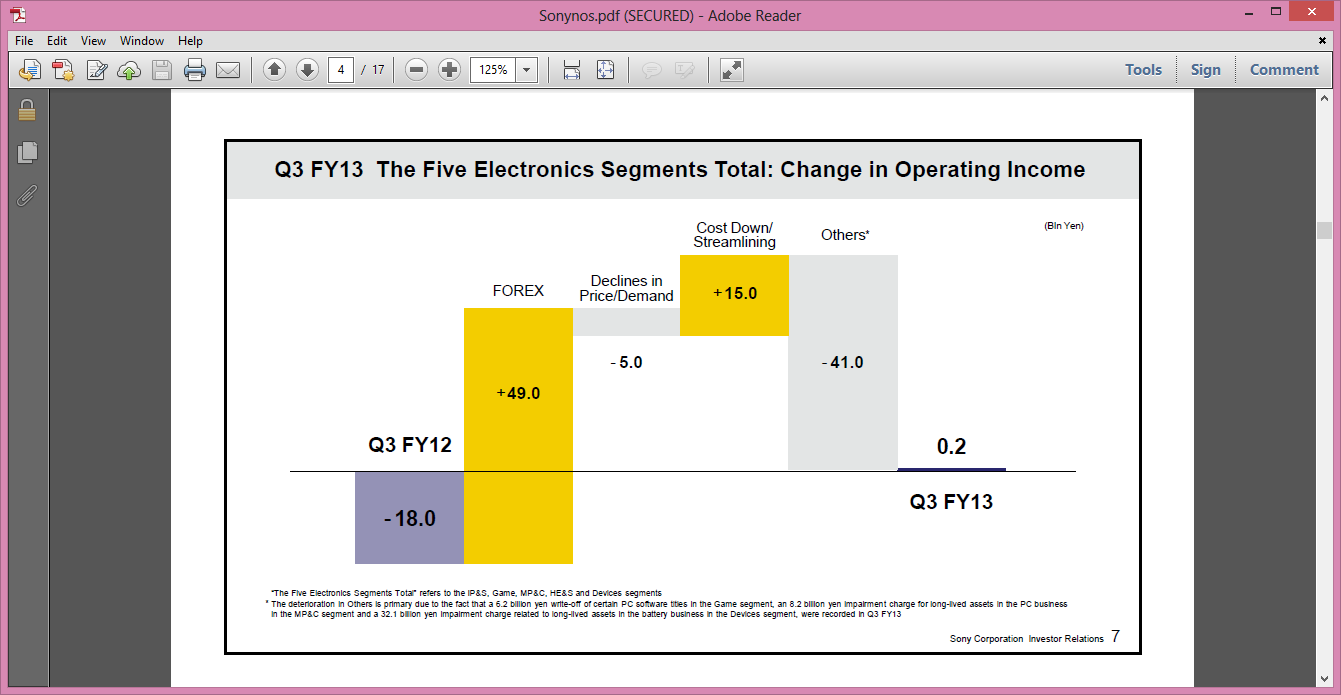 So with a Sony market cap (Japan quote) of Y17trn, what the above is saying to me is that at the current share price there is no value applied for the five electronics segments in my view.  Just looking at Pictures, Music and the finance division I can see 17% upside (to US$19 or Y2000).  Add on some value for the electronics businesses and this clearly provides further upside scope.  On this basis US$19/Y2000 is just my first review point.

Email ThisBlogThis!Share to TwitterShare to FacebookShare to Pinterest
Labels: japan