Europe today - the thoughts of Statoil and Arcelor Mittal

It has been a busy corporate earnings week around the world.  There is not too much out today in Europe, but the two obvious companies to talk about are the Norwegian oil giant Statoil and the Dutch/French/US listed steel concern Arcelor Mittal.

Statoil is often criticised by investors for being just an agent of the Norwegian state (who own a substantial stake) and not putting other shareholders interests first.  Other issues include the usual large cap oil sector factors of low production growth and the rising cost of exploration.

Looking at the numbers, production growth on a per day basis was down 3.2% in 2013 and was actually a little worse in Q4 although the company noted the impact of 'divestments and redetermination'

Free cash flow generation was effectively zero throughout 2013.  As noted above, this is not unusual in large cap oil at the moment.  In fact net cash usage is more common than not.

This is the critical chart though from the release.  Believers will focus on the greater capital discipline over the next couple of years allowing 'organic free cash flow to cover dividends from 2016' and that in the meantime investors are 'paid off' with a near 5% dividend.

My view (and the market's view seemingly with the share slightly down today as I write) is that there is still a lot here on hope.  A P/E either side of x10 (depending on which year you look at) and a price:book of around x1.4 is not screaming value.  Buy for yield if you must, but I am not going to have a look again until NOK130.

Turning to Arcelor Mittal, as Fast FT noted:
'Fourth-quarter earnings before interest, tax, depreciation and amortisation rose to $1.9bn, beating consensus forecasts...The Luxembourg-based group reported full-year earnings of $6.9bn, beating its forecast of $6.5bn. The steelmaker cut its guidance last August from $7.1bn to $6.5bn because of weaker demand in Europe and the US. ArcelorMittal said improving conditions would see its earnings rise to $8bn in 2014'
However despite the improvements in cash flow generation and net debt reduction, at the net profit level, Arcelor Mittal are still running at a loss due to a variety of costs, fines, writedowns and related - such is the accounting 'complexity' of a steel company (and why it is valued at x0.6 book).  Note too the material difference between 'reported' and 'underlying' ebitda.

One of the keys for getting the company back to full profitability is cost-cutting. Naively extrapolating the additional savings hoped for over the next couple of years almost wipes out the net loss.  Additionally impetus though is required.

Could this come from the demand side?  Arcelor Mittal have always provided good economic insights and their report today was no different.  Their weighted global PMI manufacturing index has aped the move of the more-reported Markit index.  Note on the right that the US is expected to grow in year-on-year steel consumption terms AS FAST as China.  That's a useful mix for Arcelor Mittal given they have upped exposure to the former area recently via a deal whilst they have always been relatively weak in China/surrounding areas. 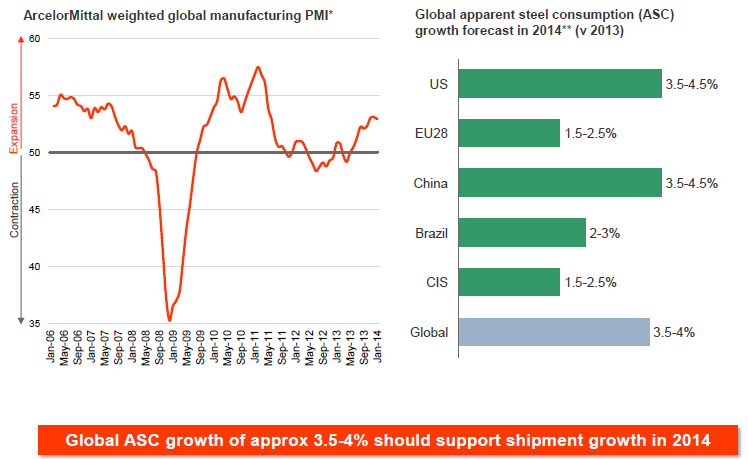 So what is priced in now to the (last 6 months) strong performing Arcelor Mittal share who, as aforementioned, cut their forecasts in August last year?  A US$43bn+ EV means that the shares are on a sub x6 EV/ebitda rating but the lack of real profitability still worries me.  I think, via cost cutting and an ok demand backdrop, the group can get back to a positive number but, sometimes in the market, it is the travelling and not the arriving which is valued highly.  ﻿

Looking at the above (US$) share price graph, Arcelor Mittal feels like the world economy.  Better than 6 months ago but a few questions being asked now.  For a company with debt and currently no net profitability I would need to see a lower share price.  Sub US$15 (US quote) or sub Euro11 (European quote) are flag levels for me.

(admittedly the Euro quote looks primed for a break at Euro13+ but as the company reports in US$s and is inherently a global business, I prefer to use the US quote).