Back in October, when I last posted about the Swiss diversified financial company Credit Suisse, I concluded that:

'They are copying some of the styles and strategies of other well-known banks (and why not), which the market will like.  And, like Citigroup, there is a good bank struggling to show itself...That is really the trouble today.  At x1.1 book, the share is there/thereabouts if you believe that the Q3 lower return on equity number is just a blip...and that is down to the investment banking side.  Where they are going (more like 75% private wealth, 25% investment bank profit split from the current YTD c. 50/50) makes sense but, in the shorter-term, it leaves them exposed to markets / the investment banking unit'.

Broadly the above still remains the case and - with more volatile markets impacting perceptions towards the investment banking unit - the shares have fluctuated between CHF26-30 since I wrote my report (at CHF30).

Today's numbers contained another sharp dichotomy - as is to be expected - between the continuing 'Strategic' businesses and the 'bad bank' non-Strategic ones.  The issue remains where the company is hoping to go ('return on equity > 15%') and the underlying reality (10%) due to the dulling impact of the non-Strategic aspects. 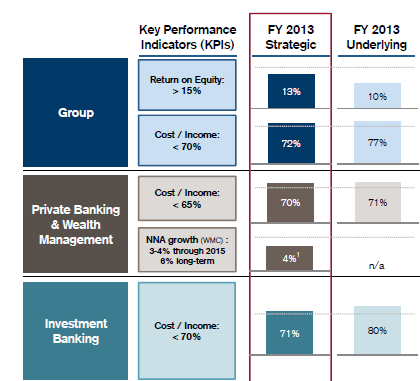 As I noted with UBS earlier in the week (link here) the wealth management side was not fantastic (Q4 yoy profits slightly down, FY13 profits up 4.5% yoy) as Credit Suisse's net inflows were weaker than UBS due to the latter's bigger offsetting gain from Asian inflows.  Asset management was better though.

By contrast, the investment bank undoubtedly excited hopes in 2013.  I found this chart on the profile of the different constituents of the strategic investment bank business quite useful in helping to show the company's good structural position: 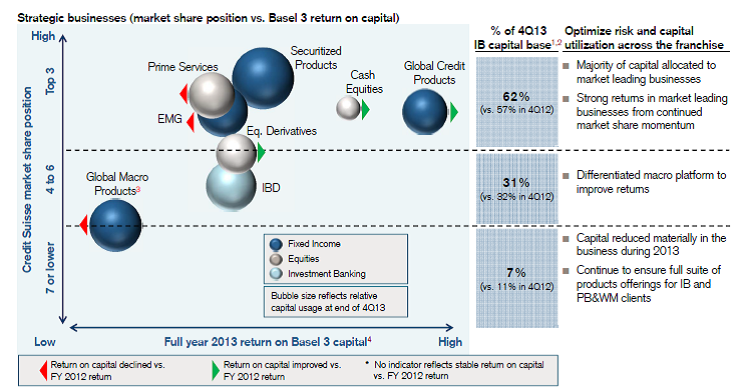 Using the FY13 numbers and putting wealth management/private banking businesses on a x10 ebit valuation and the investment bank at x6 ebit valuation I came out - rolled forward another year - with a valuation of about CHF42bn i.e. about the same as the current Credit Suisse market cap.

The issue - and opportunity for the company - comes with this chart, which is all about reducing the drag of the non-Strategic businesses.  Curb these losses and the return on equity targets noted above become a possibility - and the valuation of the group goes up.

At x1 book and a 10% actual 2013 return on equity, statically Credit Suisse is 'fairly valued'.  The fall of the shares since I last wrote on the company combined with more time to wind down the non-Strategic assets is though generating the conditions for an interesting turnaround story.  As it is a financial company, this story will be volatile / subject to market influence / legal and regulatory changes but today you are getting that turnaround story valued as a call option.

I like Credit Suisse at the CHF26 support level and would add to this starter position at CHF24 and each new CHF2 below this.
Posted by Chris Bailey at 08:13