Back in October, in a posting about Altria - the largest cigarette company in the US and with brands such as Marlboro in its stable - I asked:

'Is Altria more than just a yield stock?  You can see the attractions of holding this view (in a chart the company presented last month):' 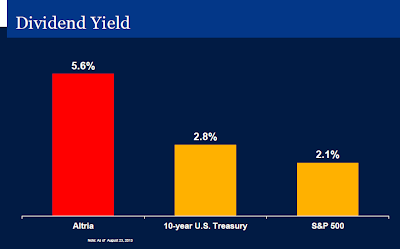 What were the key quotes out of today's Q4/FY presentation beyond the 44th successive year of a dividend increase (+9%) and slightly higher market shares for Marlboro?  All with my emphasis added.

'Altria expects to continue to return a large amount of cash to shareholders in the form of dividends by maintaining a dividend payout ratio target of approximately 80% of its adjusted diluted EPS'.

'we plan to make disciplined and incremental investments to build our e-vapor business'
I noted back in October that the Altria core business (ex the value of the SABMiller stake) was valued in the x7s EV/ebit.  Given the combination of characteristics above (yield, some growth, rising market shares, commitment to shareholder remuneration, some effort to grow in new related markets such as e-cigarettes) that feels good value.  And the reaction of Mr Market to all this?  The share pushed down closer to a sub US$35 price.  Feels a bit rude.

Value for income and capital growth seekers alike.
Posted by Chris Bailey at 23:28