Yum! Brands: still a buy despite the China turnaround wait

Since my last write-up in mid-December on Yum! Brands which focused on the company's position at the apex of a number of (unfortunately) strategic growth trends of obesity and fast food consumption in China, the stock has moved slightly up.


Yum! Brands reported – at a headline level - mixed numbers for Q4 with the China Division sales standing out (‘16% same-store sales decline’) as the hygiene and related issues continued to overhang.  By contrast progress at the other divisions appeared solid.

Management acknowledged the issues in China (‘sales recovery in China continues to be slower than expected’) but via easy comparisons, rising consumer perception scores, two menu revamps (one in each half of the next 12 months) and continued restaurant expansion remain optimistic about the medium-term opportunities:

There are some risks here. Same stores sales for KFC in China did not improve in the month of December and January as the company expected, as apparently ‘recent promotions were too narrowly focused from a consumer perspective’.  The company have changed their approach ahead of the critical Chinese New Year trading period in mid-February.

Outside China, progress was solid at KFC on a sales basis and even the US – helped by lapping easier comparisons – showed progress (anticipating the ‘best year in sometime’): 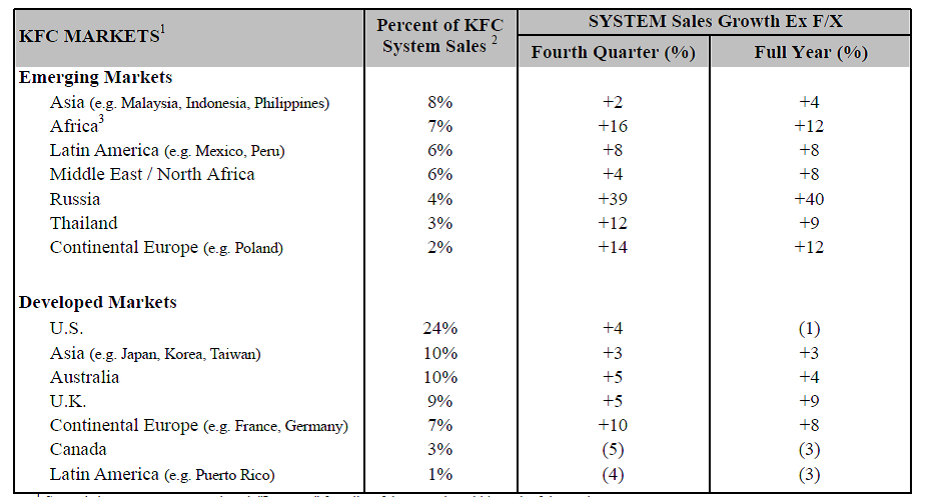 Pizza Hut was also akin with the US shifting to positive Q4 year-on-year sales.  This was driven partially by technology as well as easier comparisons:

‘We also enhanced the Pizza Hut mobile app back in late November. Before the fourth quarter over 40% of delivering in carry out orders we're by digital. Over 50% of all digital orders are occurring through the app and mobile devices and digital sales grew 40% year-over-year in the fourth quarter’

Meanwhile Taco Bell – as noted above – showed good growth via the growth of its breakfast offering.

Management guidance continued to be for 10%+ EPS growth in FY15.

Using FY14A profitability the company is currently trading on x22 EV/ebit.  Of course this is compressed profitability due to the above issues.  But how compressed?  Management guided as shown below in the conference call:

‘Just recovering average unit volumes to 2012 levels to KFC will result in $1.7 billion incremental revenue and that doesn’t even include the new units we’re building… There’s a $600 million profit opportunity by simply returning our existing assets to the volumes we had in 2012’.

Naively adding a US$600m profit increment to the FY14A profitability drives the multiple down to c. x16 EV/ebit and clearly greater scope beyond this exists (as the asset base has expanded versus the 2012 level).  Of course this is unlikely to happen immediately (the China bounce back will be H2 weighted) but as a profits roadmap this is what investors have in their mind.

I think you can see this via the share price graph where considerable support kicks in below the c. US$70 share price level as shown in this last 3 years share price chart:

With net debt less than x1 ebitda, free cash flow running at c. 3% and a progressive c. 2% dividend promised to be progressive despite some of the ongoing execution challenges above, the balance sheet/shareholder remuneration is solid.

Overall for me Yum! Brands remains a ‘buy’ with a fairer value in the US$80s.  It is particularly interesting below the US$70 and US$65 share price levels but given any element of a reasonable recovery in China – combined with continued progression in the other divisions – is likely to push profitability beyond the US$2.5bn operating profitability line (equal to a c. x14 EV/ebit valuation at prevailing) which feels like value.

Some faith is still required but – as discussed before – as a play on some combination of the changing consumption habits of the Chinese consumer with good free cash flow international faster food businesses, the business has angles.