Disney - has the mouse roared enough?

The last time I wrote about Disney (link here) I concluded that the broad range for the stock was US$85-100.


The Q1 (fiscal 2015) numbers from Disney were headline extremely strong with all key metrics up sharply especially at the cash flow level:

Divisionally there was a little more results variability.  Media Networks had relatively strong revenues growth but operating income year-on-year only edged up because of higher programming costs at ESPN (a trend that has been apparent recently).

Parks and Resorts saw good progression driven by domestic US operations.  Studio Entertainment struggled a little on revenues as the Frozen theatrical release began to fall out…but was very strong on the operating profit side due to Frozen merchandise amongst other factors.  The latter also boosted Consumer Products. 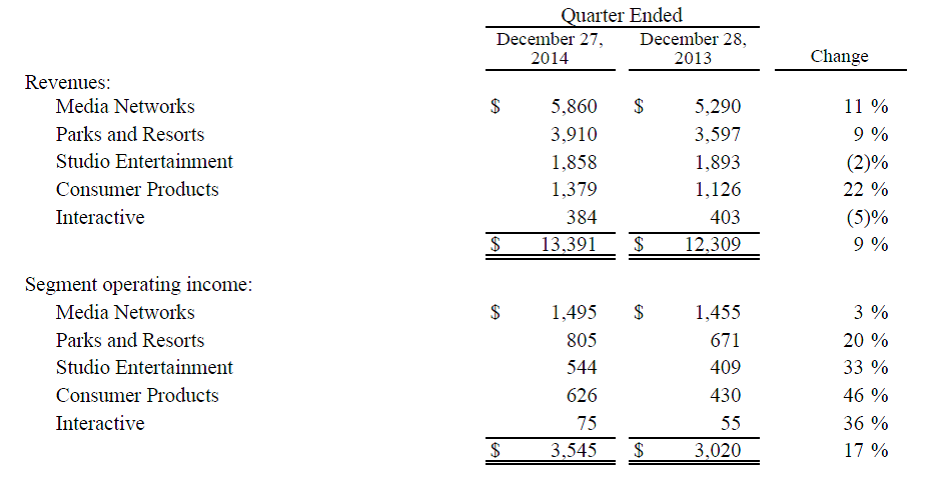 Unsurprisingly given the above free cash flow took another step forward as well.

Disney shares were rampant and pushed to new 21st Century highs in the immediate aftermath of the results publication to continue their amazing run over recent years:

So what about valuation and thoughts on the share?

However I do note that the free cash flow yield is only a little over 2%.  Whilst this is more than enough to cover the c. 1% dividend yield (and debt is hardly an issue as per the above) this is a signal to me that earnings are being slightly over efficiently generated at the moment and the combination of tough comparisons and some element of natural slowing will temper the growth profile.
Of course there are growth opportunities. In May, Avengers: Age of Ultron launches followed by Star Wars: The Force Awakens In December. Both films have scope to be US$1bn revenue blockbusters. The company will also benefit from expanded product licensing. In spring of 2016, the newest Disney theme park in Shanghai opens, which will fuel parks and resorts revenue for years to come.  Meanwhile at the slightly troubled ESPN division the College Football Playoff Series during January alleged had high audiences.

Additionally with the balance sheet Disney have they have share split and capital return options.