So much to potentially write on the Ukraine situation but I thought this paragraph from the Financial Times captured global differences in opinions nicely about militarily assisting Ukraine (some American politicians) or not (European politicians and at the moment President Obama):

'The debate enters a critical phase in Washington on Monday with Europe’s most powerful leader, German chancellor Angela Merkel, visiting the US. Western diplomats say her presence could stiffen Mr Obama’s spine in opposing the hawks. But the matter is seen as too close to call'

A great chart (and link) from Horan Capital showing that it is not a given at all that small caps outperform their more internationally centred larger cap cousins when the DXY goes up.  I would agree with this - fading earnings momentum from the larger cap stocks can impact all and if it hits confidence/liquidity in small caps then underperformance is not unsurprising.  Ultimately small caps do best in a high certainty/growth environment. 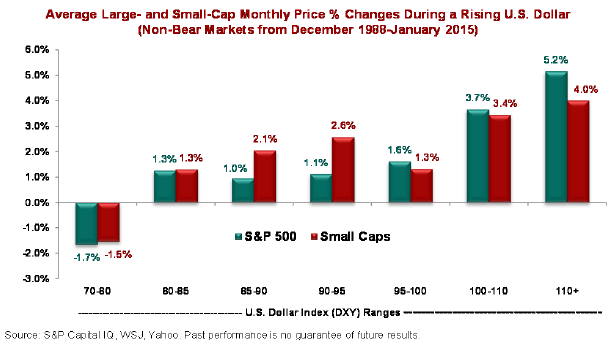 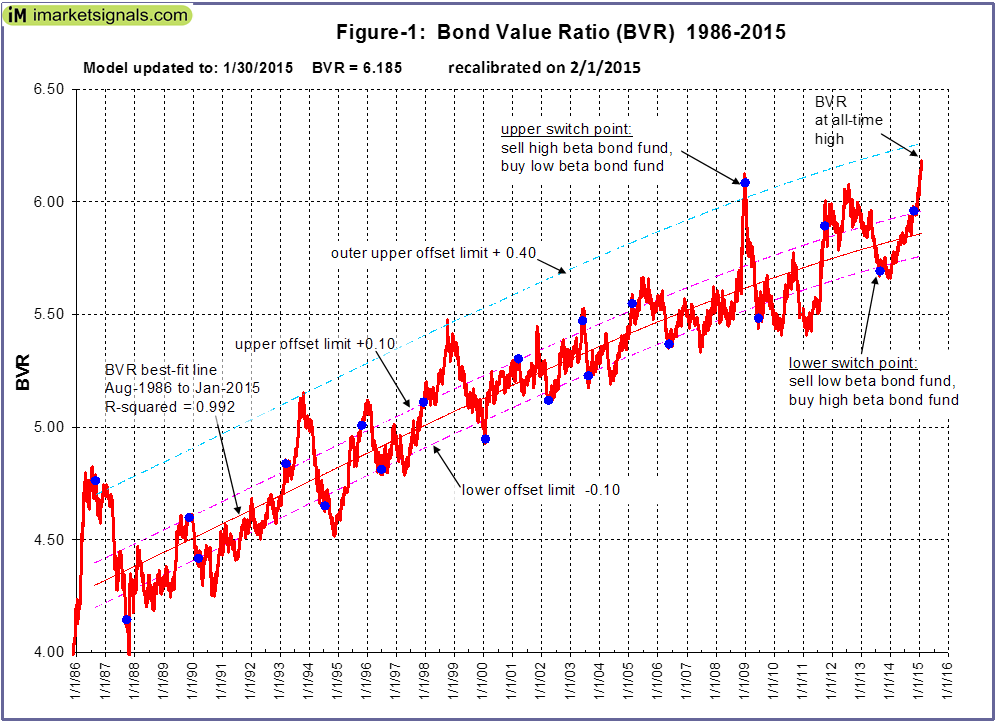 Some good observations from Signal Financial on the massively wide US dollar / Canadian dollar performance spread... 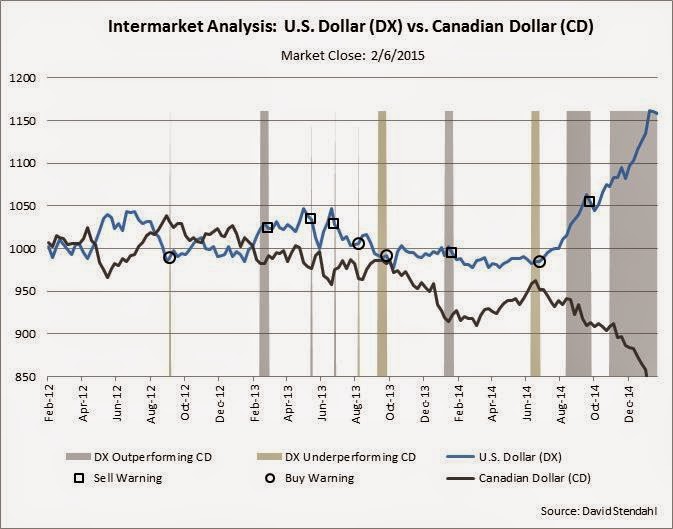 ...meanwhile this chart from The Financial Times makes a fair point on global currencies: 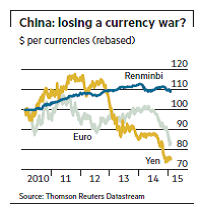 Still - at least for the time being - China has a trade surplus...but that does not mean Beijing are not worried about currency issues as the current whole debate about the yuan's daily variability rate has shown recently.

Also did you see that three out of the four deputies at the People's Bank of China are leaving.  The PBoC are not the only major Asian central bank to have some issues of course.  Did you see this evolution of views at the Bank of Japan?

Back to bonds...no surprises re this... 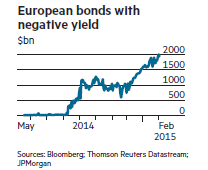 ...or even in Ireland (supposedly one of the euro zone's faster growing economies) not seeing much lending momentum 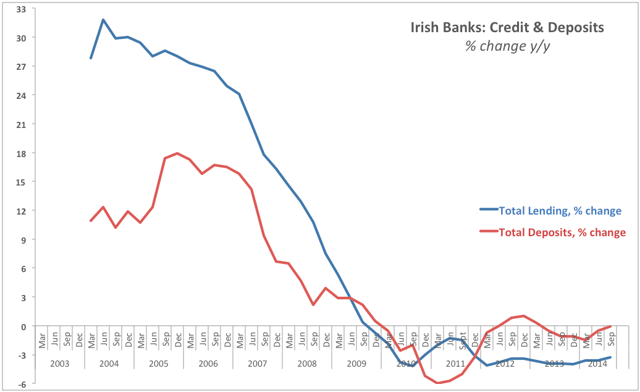 However some better news in Europe was that the Bank of Italy has raised its growth forecast for Italy to more than 0.5 per cent in 2015 and above 1.5 per cent in 2016 thanks to the effect of quantitative easing by the European Central Bank. The new forecast is a U-turn for the central bank which only last month — before the launch of QE — cut its growth forecast for this year to 0.4 per cent and saw 1.2 per cent growth next year.

However before we get too excited (and let's face it the Greek situation is hugely in transition at the moment) I enjoyed this via @Eurofaultlines who observed something population demographically interesting:

We underestimate population demographics at our peril.  Time to re-run this excellent technology use / conventional population analysis highlighted by @ValaAfshar on the top 10 global population centres:

Population growth matters as this is what helps you escape this other global trend... 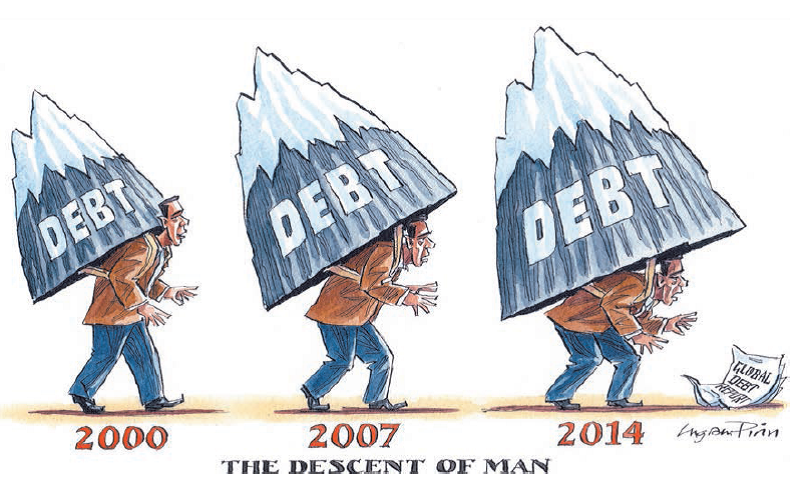 ...which apparently is stressing out (correctly as the burden will fall on them) all the under '50s... 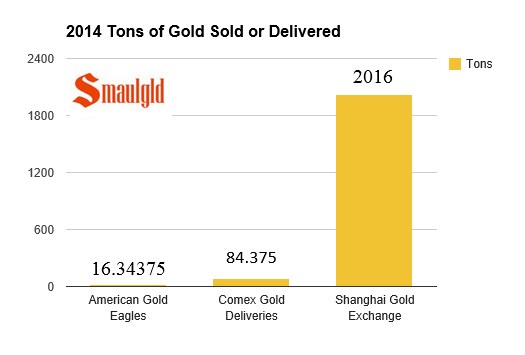 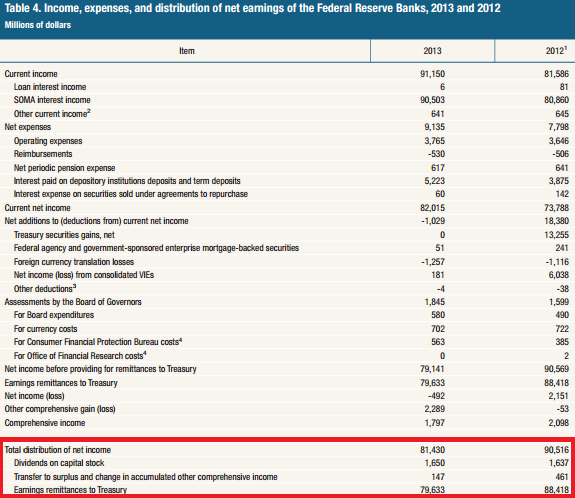 So it seems that to achieve 'full employment' the world has to make wages more equal...unfortunately the way I see it is that it is much more a skill-based world at the moment...and either you are one side of the line or the other. 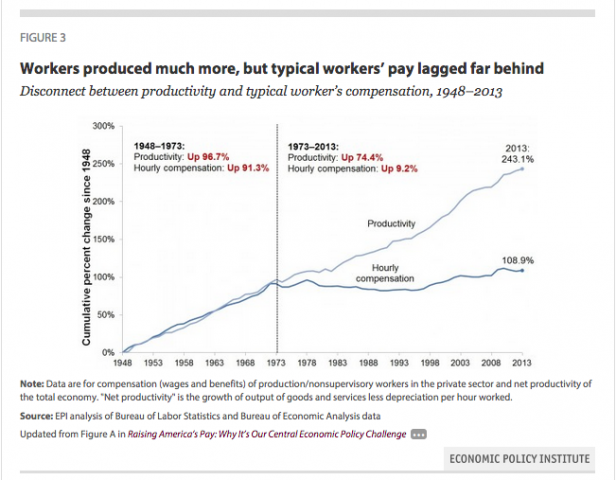 
I see Barrons ran a bearish piece on Alibaba (link here) noting that mobile may not suit its advertisements so much and international expansion may be problematic/difficult.  Fair points...but I think it is missing the wood for the trees...(and I remain a holder based on the phenomenal cash flow scope after recently buying the stock below US$90/share as discussed here).

Interesting insight on iron ore but a great photo on Caterpillar 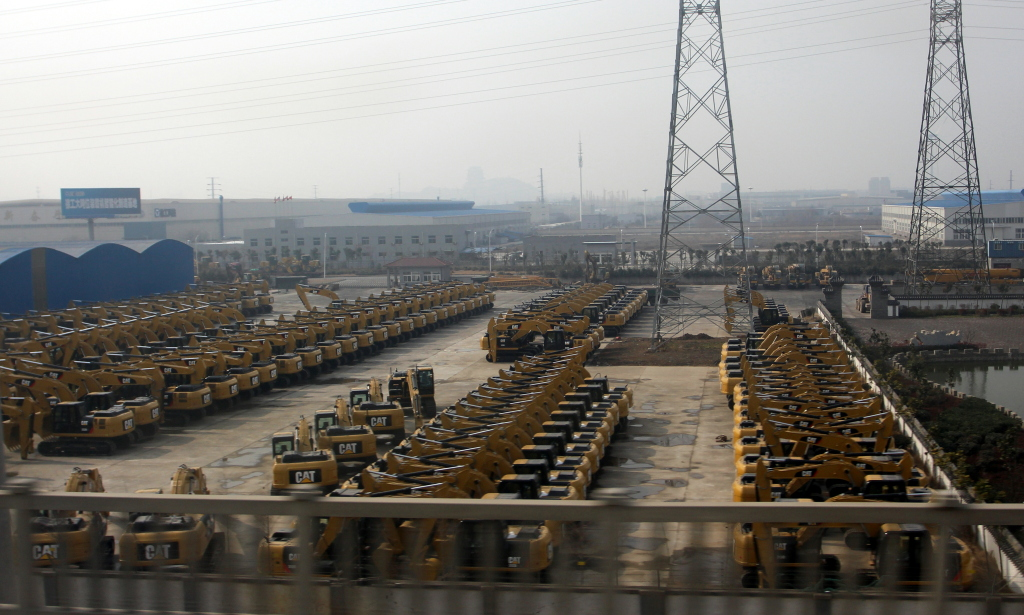 'The efficiencies of the larger ships are a boon for individual shippers, and for the global environment. They consume as little as 50% of the fuel per container moved as older ships, while also more than halving insurance and staffing costs. A megaship requires the same 20-odd crew as a smaller ship but can carry three times the cargo'.  Some good information on AP Moller-Maersk the world's largest container shipping company (but only second biggest large ships operator) here.

I like Google shares ( here ) but I thought this was an interesting link about the worst things about working for this internet behemoth.

Have a good week
Posted by Chris Bailey at 18:28