Back in early November I wrote up the latest quarterly numbers from Time Warner and amongst my conclusions was the observation:

Headline results look good, as the excerpt below from their earnings release shows...'record' revenues and adjusted operating income, the fifth year of consecutive double-digit EPS growth and continued large buybacks (equivalent to nearly 7% of market cap in 2013)

Dig below the surface and the divisional split generally impressed.  Q413 numbers were actually slightly below the numbers achieved a year previously with only Warner Bros showing progression (driven by films such as Gravity).

I noted back in November that 'the double digit plus earnings growth will slow as the company laps more difficult comparisons and continues to invest in its operations but the core fundamentals remain in place' and I still think that is the case - plus a continuation of fears how the media market may change / 'cutting the cord' etc.  First, I doubt whether there will be as much change here as some people think and second, this is why the new US$5bn buyback (and near 3% dividend yield) is important - conceptually this is a company who could return more than 10% of its market cap to shareholders during 2014.  The company's net debt : ebitda ratio is just over x2 and given the it is running at nearly a 5% free cash flow yield, the scope to do this is clear.

Another small focusing catalyst is the spin-out of the Time Inc division where the company noted:

'We also remain on track for the separation of Time Inc. into an independent publicly-traded company during the second quarter of 2014'.

The share has actually fallen, with the general market malaise, into the low US$60s over the past couple of months.  At prevailing I estimate it trades on x10.5 EV/ebit FY14e. 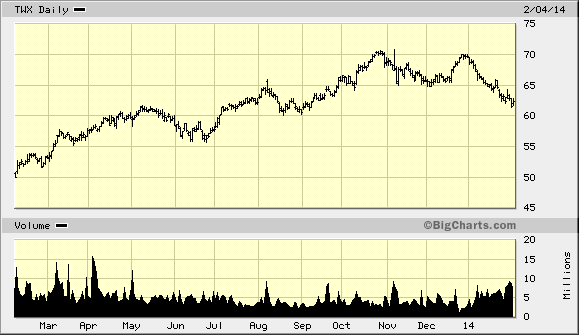 Email ThisBlogThis!Share to TwitterShare to FacebookShare to Pinterest
Labels: media