I have written before about the Swiss (and US) listed agricultural seed/crop protection company Syngenta.  For two quarters now I have noted that the share (in its US listing - the version I hold) has been trading around a US$80 share price.  Unfortunately this has slipped in the last few weeks to nearer US$70 and looks set to open below this level in US trading today.

So what is going on?  As Seeking Alpha summarised earlier today:

'Syngenta's 2013 net profit fell 11% to $1.64B and missed consensus of $1.71B, and while sales rose 3% to $14.69B, the figure undershot forecasts of $14.82B.  Adjusted EPS -12% to $19.30, EBITDA -7% to $2.9B.  Syngenta's earnings were hurt by reduced trait royalty income, a rise of $175M in seed production expenses following the U.S. drought in 2012, and a seeds inventory write-down of $170M...Syngenta expects 2014 integrated sales to increase at a similar rate to 2013. CEO Mike Mack said the company remains on course to reach its sales target of $25B by 2020. However, the firm forecasts that it will achieve the lower end of its target-margin range in 2015'.
So not the best numbers combination even if Syngenta continues to have attractive theme characteristics due to its exposure to the agricultural sector.
I note that today's presentation document did not dwell too much on such strategic matters and focused more on the practicalities of reporting the historic numbers and appraising prospects for the next year or two.
I was pleased to see underlying pricing power still nicely positive during the year...but it was a shame about the impact of costs ('growth investments' are hard to argue against). 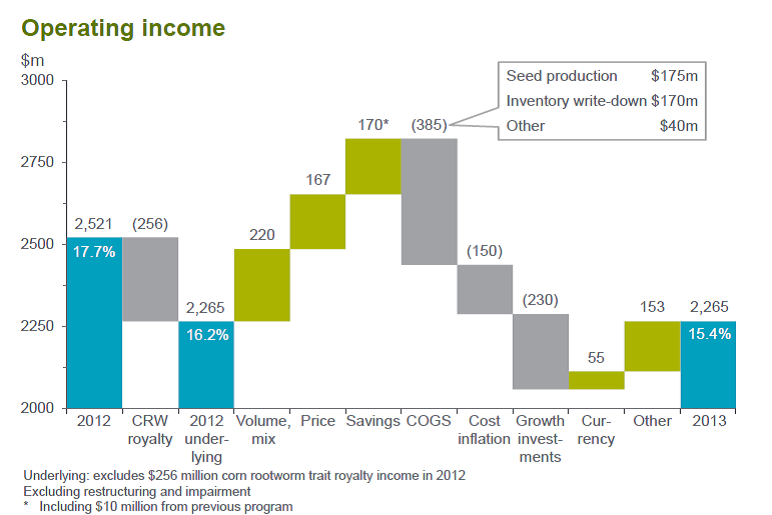 Working capital / inventories also nobbled free cash flow generation.  Sometimes that is just the way it goes, but I was a bit disappointed with such trends.  This pushed the free cash flow yield down to little more than 1%.  There is no issue with the sustainability of the dividend yield (which is now, after a 10% rise announced in these results, near 3%) given the company's negligible debt. 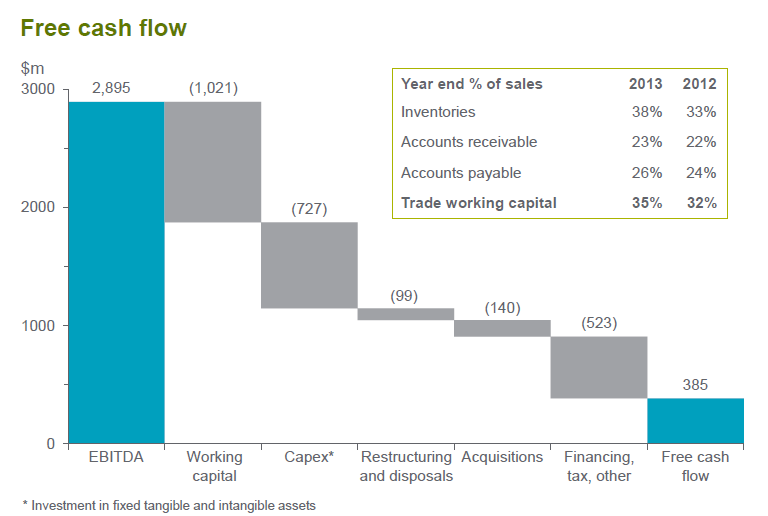 In terms of the actual underlying numbers, the real geographic 'issue' was, as shown below, in the US where there was an impact from the aforementioned seeds write-down and lower royalty income.  Elsewhere I liked the combination of price increases in Europe/Latin America with double digit emerging market growth.  As discussed at the research link above, there is real structural demand for Syngenta's products and due to industry barriers-to-entry, pricing power potential is strong. 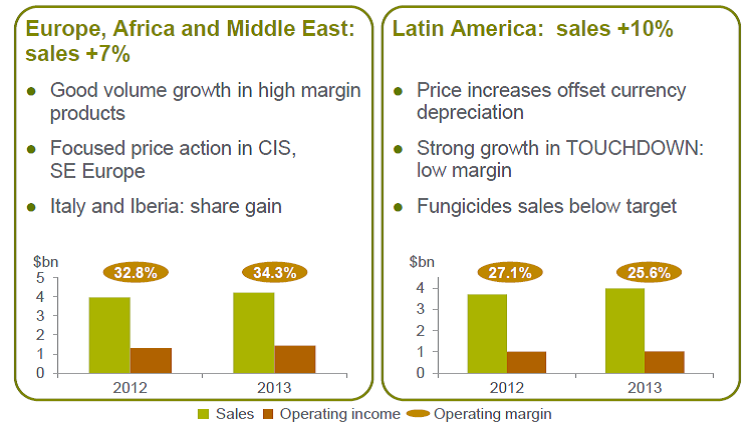 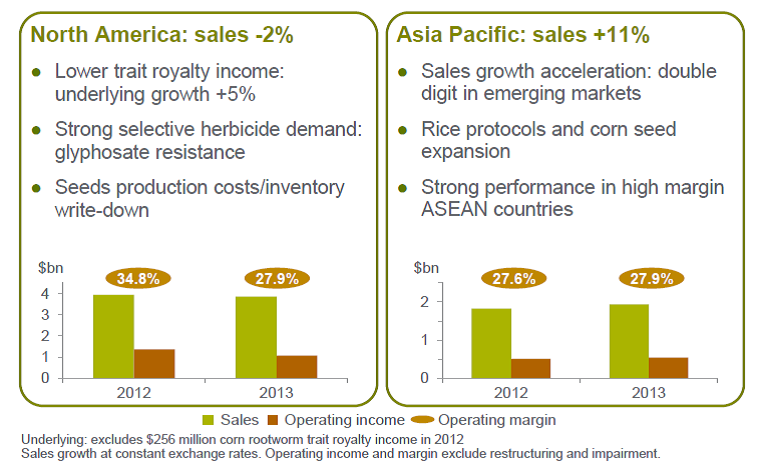 Product innovation is also important and I felt that this chart captured on-going efforts by the company well.  There is a cost to this which shows up, in the shorter-term, in the cash flow statement but it is worth it over longer periods of time.
﻿ 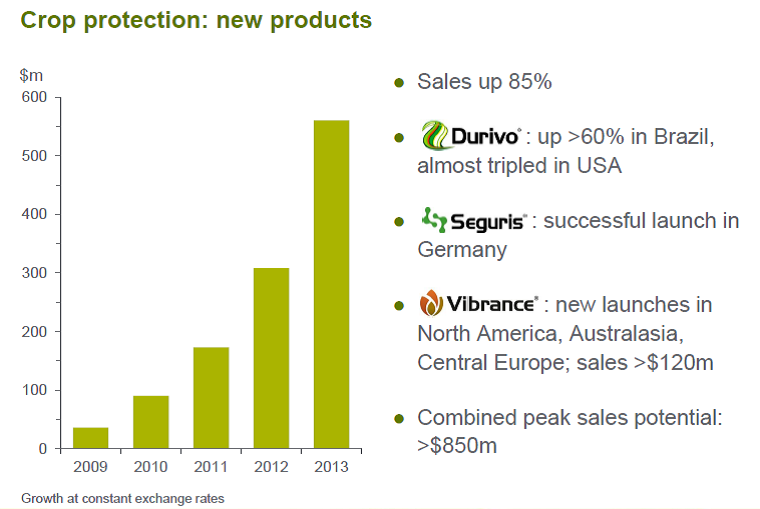 It was by no means a 'perfect storm' for Syngenta during 2013 but there are some issues which will naturally abate during the next year such as on the working capital side plus the falling out of the above mentioned seed trait and royalty issues and the on-going cost reduction efforts.  As noted below, despite continued high investment, free cash flow should recover to a 4%+ yield level.  I note in 2014 the company is limiting itself to a 'gross margin improvement' comment only, but with ebitda margins at 19.7% in 2013 there is still good (albeit reduced) trends to look forward to in 2015 and beyond. 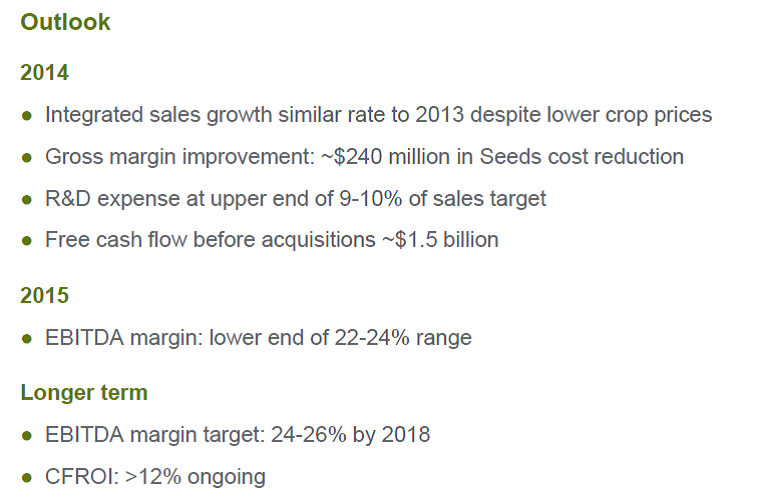 Syngenta trades on around a prospective x14 EV/ebit for FY14e with an aforementioned 4%+ free cash flow yield helping to fund a 3% dividend.  Using company guidance, if you roll the numbers forward another year though, the rating drops to the x12s.
These are not high multiples for a share with strong themes but, as always, multiples have been compressed due to the issues noted above (Monsanto's numbers were not blighted like this but accordingly the share trades on far higher multiples).
Nevertheless it feels like augmentation time and, using the chart above, I will do this again today below US$70 and again further below US$65 if the share gets there.  It should also be noted that the Swiss listed share is trading close to the CHF300 round number level - again indicating 'interesting levels'.  ﻿
Posted by Chris Bailey at 10:31