I have written a couple of times about the French listed global spirits company Pernod Ricard and always seemed to conclude that the Euro83 level was a good point to get involved in the shares.  So what are the latest views from the company?

Well it would be easy to conclude that it was a very dull fiscal half year (ending 31 December 2013) for the company judging by the sales and (net) profit from recurring operations results from the company: 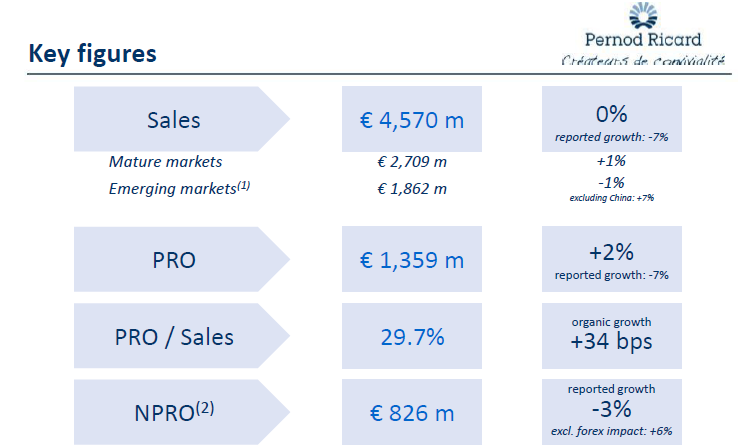 These statistics though ignore the FX impact: include that and sales were down over 6%.  Even before the currency translation issues though, there were some material differences between different geographies.  For once it was Asia pulling the numbers back as the Americas and Europe both performed well.  As I have noted from my analysis of French peer Remy Cointreau, the negative China impact, led by the corruption crackdown combined with tough comparisons, has really overhung Asian exposure:

I thought though that the company's comments about China were interesting:

'Pricing remained favourable...basis of comparison becomes more favourable in HY2' are two comments that I can work with.  Part of the reason for even looking at the spirits sector is that pricing power in the sector is strong, even if underlying market conditions are much more patchy.  This can be seen with Pernod Ricard's top 14 brands, where price-mix was positive for all but four brands (three of which were only -1%). 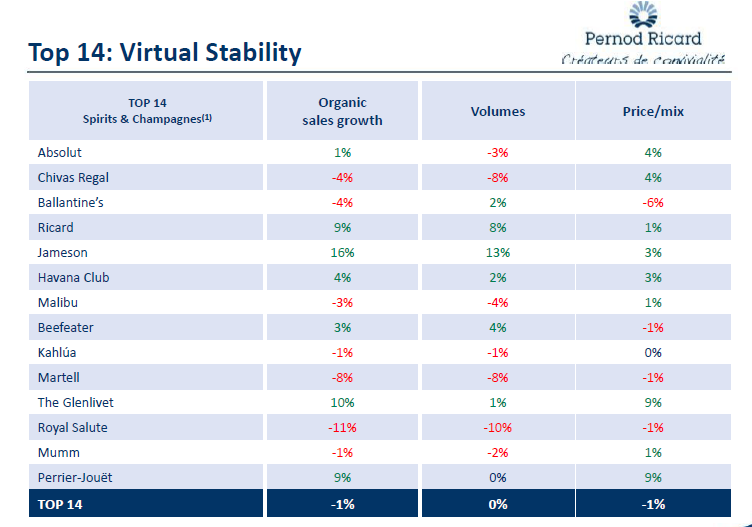 In my previous analysis I have noted that Pernod Ricard's net debt deserves attention. The ratio of net debt to ebitda remained at x3.5 during the half year despite some translation currency 'gains' on debt. As shown below the 2% dividend was not covered by free cash flow generation.  The company has good credit lines but this will induce extra volatility against better financed peers.   Continued cost cutting efforts should help here. 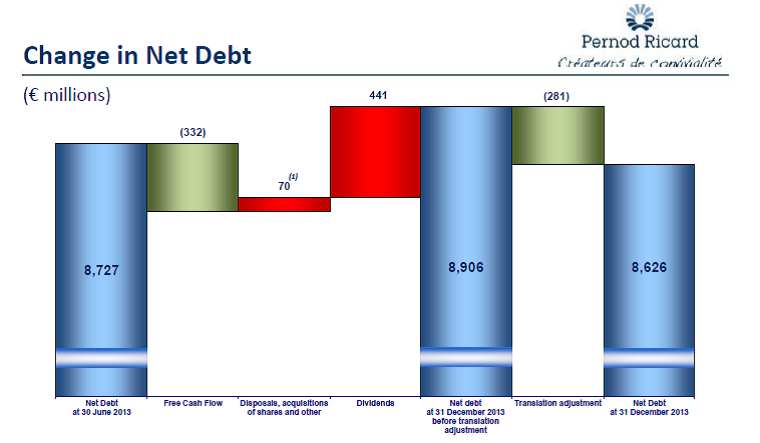 So some good and some less good from the Pernod Ricard numbers.  To me though, in tough China-related trading conditions, the company's management has run a steady ship and the combination of easy comparisons in China/Asia, continued good pricing dynamics and positive execution in the developed world does provide a story.  The issues in Asia did induce a small cut in their forecast (with current operating profit to rise by between 1% and 3% in organic terms versus 4% and 5% initially anticipated) but I think this was largely anticipated.

At a static x11 EV/ebit (with the aforementioned 2% yield) the share is a lowly valued global spirits play.  The Euro80-83 level at which I have purchased shares seems to be the area where a share price base is forming and I am heartened by, as I write, the positive reaction of the shares today (to just over Euro85).  A perception and corporate recovery should take the share back to Euro100.

As linked above, my Pernod Ricard holding is supplemented by one in Remy Cointreau which has suffered greater China-related ills (and retains an even greater bounce back capability).  To provide some general sector cover, I remain short some Diageo who - as shown below - have outperformed over the last year and continue to be materially more highly rated.