Big consumer-facing numbers three days...P&G kicks it off with some FX insights

Lots of investors hold the big global consumer names for reasons of stability, persistence, big brands and (in some cases) yield.  Over the next three days a variety of names are reporting including Heineken, Reckitts, Nestle, Kraft, Pernod Ricard and Pepsi.  I will be covering them all here.

Interesting statement though after the US close from Proctor & Gamble (P&G).  The key statement was this:

'The Company lowered its guidance for all-in sales and all-in earnings growth to reflect the increased impact from foreign exchange. P&G confirmed its prior outlook for organic sales growth and currency-neutral earnings per share growth'.

What about elsewhere in the world, well:

'On a currency-neutral basis, the Company continues to expect strong core earnings per share growth in the range of 12% to 14%'

To be fair to P&G they have talked about this before (and hence possibly why the share was only down 0.5% in the after hours).  Here is a chart they gave in October, for example, at the time of the last quarterly numbers: 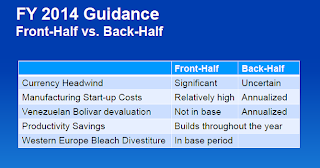 So are P&G shares cheap?  Well with an EV/ebit ratio currently in the x14s it is not too bad versus some peers. Additionally 5-6% shareholder yield (via dividends and buybacks) is pretty attractive versus 10 year Treasuries at a sub 3% yield. 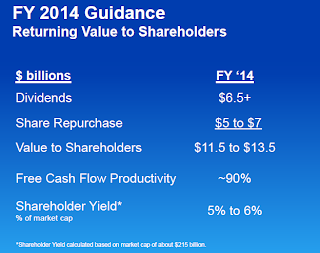 Procter & Gamble is not a cheap share but as an alternative to a bond, you could do worse.  It certainly recently has traded like a bond.  Ahead of the formal set of numbers later in the month, that US$76 level looks interesting.  By the end of the week there will be plenty of compare/contrast capability with peers too.