GE - the key is simplification

General Electric (GE) has such a wide range of activities that different investors often view it in different ways.  What was striking was that the Q4 numbers saw, year-on-year, just a 3% revenue growth but a 19% operating profit growth, driven particularly by GE Capital the company's financial unit. 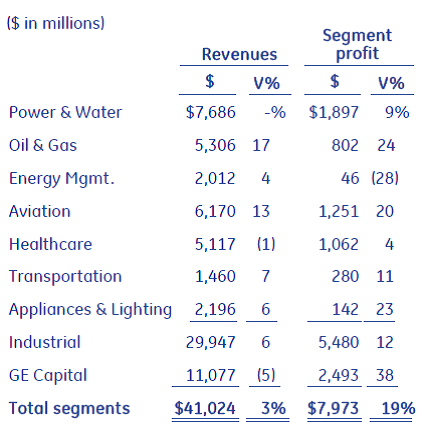 It may be the dichotomy between the single digit revenue growth and the double digit operating income growth but I was intrigued by how the company opened up its earnings release:

'Generally positive but mixed'.  As shown below the rise in the backlog, the x1.3 equipment book to bill ratio and rise in regional orders across all geographies (even Europe was +3%) all sounds...positive. 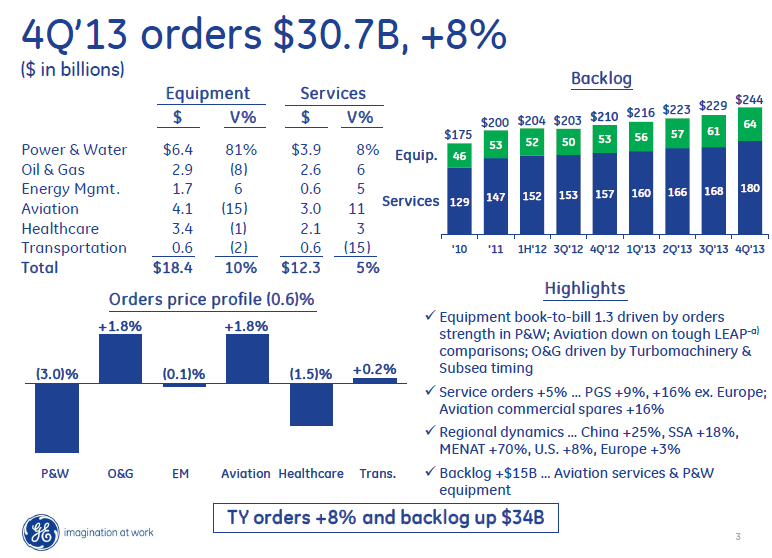 So where does the 'mixed' come in?  Well two-fold I think.  First, look at the orders pricing above for the six major industrial segments of the company.  I like pricing as an insight into the underlying strength of a business: all companies like to protect margins via pricing power.  Well three out of the six segments were negative.  That's fairly negative.

And then looking at the company's 2014 views and whilst 'value' is hoped to be a positive, 'mix' is a negative.  The real driver is simplification aka cost cutting and potentially the remunerative sale/spin-off of businesses.  ﻿ 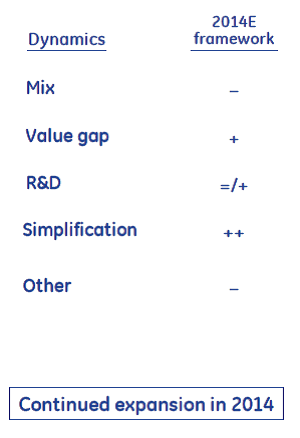 Before I take a further look at their 2014 hopes, the mention of simplification above was also apparent in the cash flow statement with the raising of just under US$17bn via the sale of the NBCU jv stake...although this was mostly used on acquisitions, taxes etc.  Ex this they are still generating (in round numbers) US$17bn in cash of which nearly US$8bn was given in dividends and just over US$10bn given back in a buyback.  That's in aggregate the equivalent of 6% of the current market cap back to shareholders.  This number could get even more material with any more net sales: that's the power of simplification. 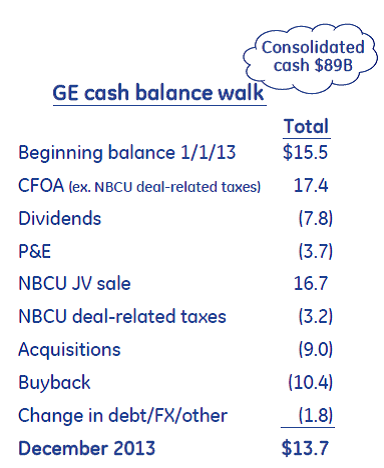 So 2014.   Simplification is good for margins on the industrial side.  With an anticipated 4-7% organic revenue growth there, 10-12% operating profit growth from this part of the business is again achievable. 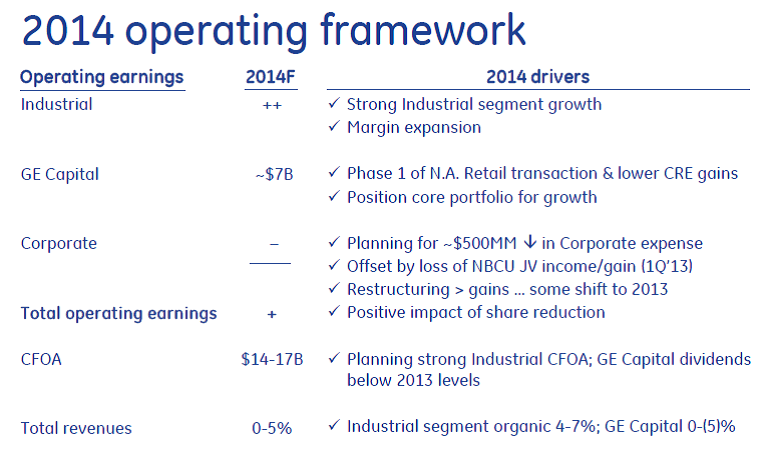 One flex though could come from GE Capital.  As noted above it had a barnstorming 2013 but life gets tougher now (as noted by the dividends comment above)...which is why the company announced in November that it was spinning off 20% of it.  That simplification again.

GE shares have had a good last year.  Of the current US$275bn market cap, I can justify getting on for 90% of that via the industrial unit.  Awaiting the value of the spin-off is the key.  US$7bn of earnings in 2014...I suggest that is likely to be worth more than the c. US$30bn needed to get up to the current market cap.  No wonder the share jumped US$2 on the spin-off announcement in November.

For large companies, simplification is a key theme.  On this basis the slightly cautious commentary regarding 2014 should be looked through.  I like that US$26 resistance/support point to start to get involved.
Posted by Chris Bailey at 13:00