Deutsche Bank: at a near 2 1/2 year share price high and still in crisis

Any press disclosure on a Sunday about corporate trading numbers is unlikely to be good news.  And so it was with Deutsche Bank.  As mooted in much of the weekend press, Q4 2013 saw a surprise loss.  That's not good news.

So why the problem? 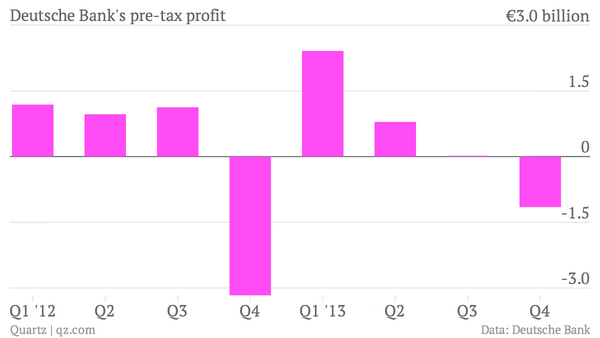 As Bloomberg put it in this report:

'The bank had a pretax loss of 1.15 billion euros ($1.56 billion) on 528 million euros in litigation-related expenses, as well as costs tied to its reorganization and charges to adjust credit, debt and funding valuations'

Whilst the company is 'confident' the bank can reach targets they set for 2015, shorter-term more issues are apparent:

More details will be forthcoming later today in a formal presentation by the company but in the first nine months of 2013 the company - even after goodwill, restructuring and litigation issues are factored in - the return on equity was 5%.  That's not good. 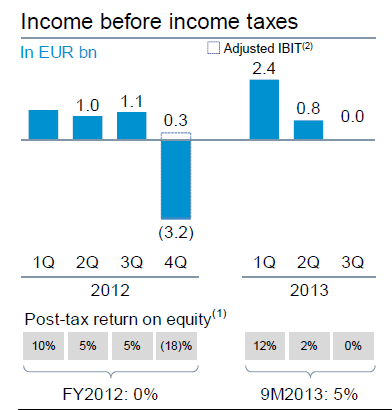 Valuing the near Euro55 book value in a manner consistent with this level of return on equity generation and I would struggle to want to pay more than Euro30 for the shares of the company, even adjusting for some hope factor for the future.

I cannot see the shares staying near the two-and-a-half year high they were at on Friday.  The senior executives of Deutsche Bank are going to have much explaining to do later on today.