I had the opportunity yesterday to appear on BBC World's World Business Report to talk about the disappointing French economic growth numbers. 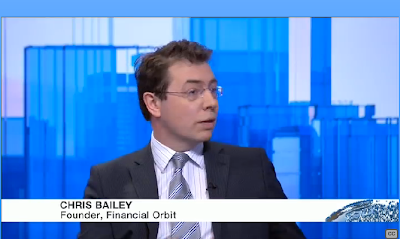 At a statistical level a -0.1% Q3 GDP print by France versus hopes of 0.1% does not appear that different but beyond the psychological impact of a negative number, the clear message from these numbers is the sheer dullness of them, over five years into the global financial crisis.  Now we can start to understand why the European Central Bank cut interest rates last week.  We know already that Southern Europe continues to break-out of the difficulties from the last few years but the growing evidence of French economic weakness (poor GDP numbers, a recent downgrade from the S&P ratings agency and, just a couple of days ago, a negative report from the OECD about the competitiveness and flexibility of the French economy) causes a big problem for European policy-makers.

Germany cannot stand alone in Europe.  At a time when the French economy that is growing - for the first time in five years - more slowly than Spain, for the European economy to decisively move forward, more policy stimulus is needed beyond last week's rate cut. 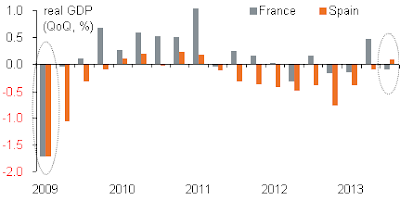 There were plenty of reports in the last week that the interest rate cut split the ECB governing council with the German representative voting against it.  Mrs Merkel and the other German policy-makers need to keep thinking about whether they will risk the overall European economic profile.

I think Europe needs further stimulus assistance.  Whilst the policymakers discuss this, further Euro weakness is likely and regional stock markets - even with the global help of factors such as Janet Yellen's testimony - are likely to see volatility.

There remains good European companies to invest in but top-down issues to factor in too.  France tells Mr Draghi 'more please'.  Will Germany sanction it?
Posted by Chris Bailey at 05:55

Subscribe here for free updates delivered direct to your inbox