A few months ago I wrote about the global tobacco company Philip Morris International talking about the potential (at the then US$90 share price) for an opportunity to start accumulating the shares at the 'triple bottom of US$84'. Well, the first five weeks of the year has not been kind to Philip Morris International.  That US$84 level held briefly, but in the last couple of weeks the shares have fallen to below US$80.

So what did the Q4/FY numbers say?  Well, there were four key points.  First, akin to the presentation slide given in November (below), pricing remained positive but volumes and revenues continued to compress. 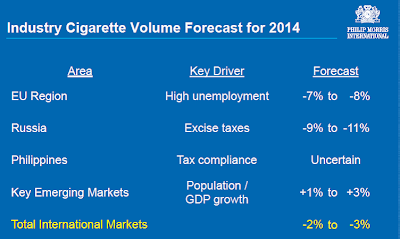 Third, dividend growth remains good and is equivalent to a yield of well over 4.5%.  Additionally continuing large buybacks (equivalent to 3.8% of the company's EV) occurred.  It is interesting that the average share buyback purchase prices was just over US$89 during 2013 (and around US$81 specifically in Q4)

Finally, 2014 hopes were again blighted by negative FX translation.  It is anticipated that in 2014 however the headline EPS progression would be negative in a c. 2.5-4.5% range, even if the underlying increase in EPS anticipated is 6-8%.  So a few per cent below 2013 performance.

Additionally the buyback has been reduced from US$6bn to US$4bn.  Why is this?  Free cash flow is around US$9bn a year (7% FCF yield) and net debt is hardly excessive...and I have noted above that the share price is lower...

The reason goes back to my November posting.  Back then I mentioned:
Also note the '2014 is an investment year' comment.  One area of bigger marginal investment is e-cigarettes, which continue to develop and PMI intend to be a big player in this area.  They are spending now to create growth later.  That does not sound too terrible.
﻿ 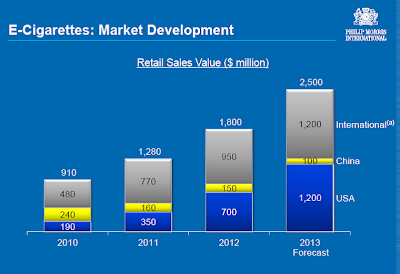 Putting it all together, some of the headlines (FX-related) are a bit different but scrape below and the fundamentals (pricing, underlying earnings) are fine.  I would prefer the company to continue to buy back as many shares as in 2013 but, nevertheless, they should still return more than the totality of the free cash flow during the year (c. 9% capital back to shareholders).  No shareholder can be too upset with that, especially as the dividend is up 10% year-on-year.
Overall, having weighed the release, I added to my initial position bought at US$84 in early US trading.  At x11.6 static EV/ebit I can see an easy return to the mid US$80s historic support level.  Add the yield on and the scope for a relatively low risk 15% return is apparent.
﻿
Posted by Chris Bailey at 15:04