The Financial Times front page on Monday notes what I have thought for a while…there is going to be a lot of ‘save as’ under a different file name for the post-Brexit versus the pre-Brexit legislation!
‘Theresa May is looking to keep Britain under the remit of some EU agencies after Brexit, in an admission that the UK does not have the time or expertise to replace European bodies with a new British regulatory regime within two years’ 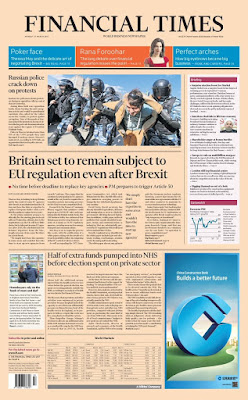 No surprises to me!

Meanwhile in the UK economy some good observations here noting some not great recent data:
‘The three-month trend, which includes incredibly weak growth in both December and January, shows UK retail spending has not been this bad since late 2013. The three-month fall is comparable to that seen at the beginning of the financial crisis’ 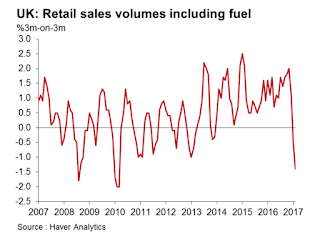 A Brexit fear effect?  It certainly does not help but on the ground the UK economy does not feel that bad and – as shown by the bounce in Next shares after their cautious comments last week – much is factored into impacted UK shares.

To carry on reading the rest of this posting for free click here.
Posted by Chris Bailey at 22:34