So what is happening in the macro world?

Well got to start with the G20 meeting in Baden Baden (Germany). 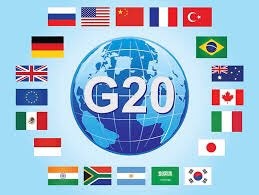 The communique is worth a read https://www.docdroid.net/lw3tcC5/g20-communique-170318-01.pdf.html especially the aspects which noted:

G20 drops warning against protectionism after US opposition

The diplomatic reaction was provided by the German Finance Minister Schäuble who said the failure to agree on 'wording' for protectionism does not mean there is no agreement on the issue or, as he put it, "Different interpretations".

Meanwhile the French FinMin Sapin was a little less diplomatic: “There wasn’t G20 disagreement, there was disagreement within the G20 between a country and all the others.”

Meanwhile as I noted on Twitter after seeing the following graphic:

Useful push-back on some of the anti-US G20 communique rhetoric.  Saying that, no time for complacency.  Got keep pushing for more free(r) trade 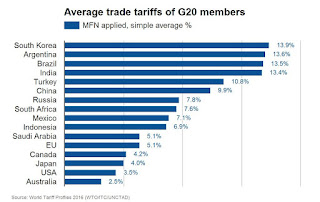 To carry on reading the rest of this posting for free click here.
Posted by Chris Bailey at 16:09