So the market cracks on with the Dow Jones racking up another (an eleventh) successive record high as noted by Fast FT:


Photo finish. A last-minute crawl higher pushed the Dow Jones Industrial Average out of the red and ever-so-slightly into the black, as the blue-chip average extended its longest record-setting streak since 1987.
The Dow closed the day up 0.05 per cent at 20,821.8. It was the eleventh time in a row that the index, one of Wall Street’s oldest equities barometers, notched a new closing high.
I had to a laugh at this Hedgeye cartoon which highlighted some of the difficulties at this heightened level. 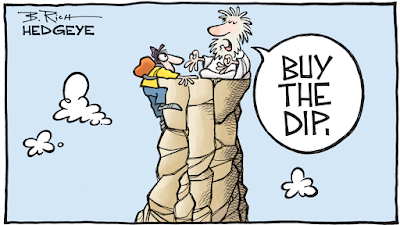 Part of the trouble are the easy extrapolations that people undertake...and reflecting some of the challenges with this currently are nicely captured by the chart below.  Not that exciting... 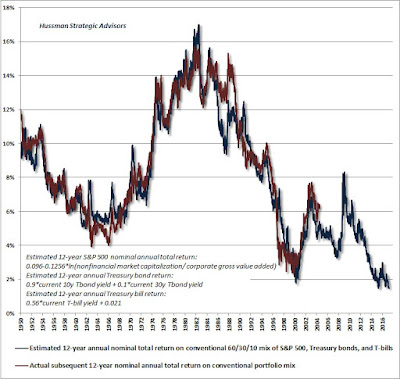 And we all know where valuations currently are: 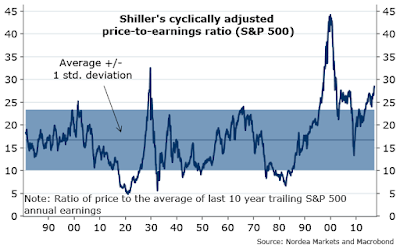 Of course extrapolations can only tell us so much. The historical insights below show a range of potential scenarios.  If you pushed me I would anticipate the middle one will prevail. I see it very much as an alpha-centred stock picking market. 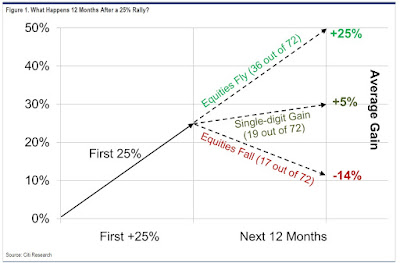 Insiders are not particularly convinced either...hence the selling noted below:

However as wonderfully noted in this great posting by @ukarlewitz every time returns for the S&P 500 were positive in BOTH January and February then the full year ended up as positive: 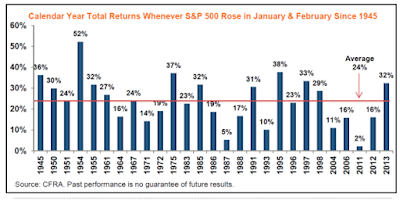 Of course it remains a very strange world as nicely summarised below.  Too much debt out there, too much need for stimulus and central bank support: 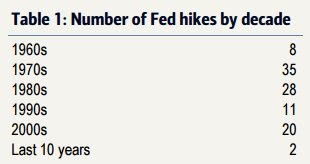 And talking about debt, this made me smile:

"Considering that Trump hasn’t enacted any fiscal legislation, it’s a bit of a stretch for him to take credit for any changes in debt levels," Dan Mitchell, a libertarian economist and senior fellow at the Cato Institute, told us. "Debt levels go up and down in the short run based on independent factors such as quarterly tax payments and predetermined expenditure patterns"

Of course one of the current big discussion points with Trump surrounds protectionism and related.  Certainly we know global trade has been poor... 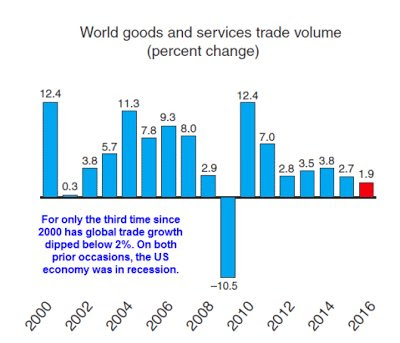 ...but another look at this remarkable graphic showing the clear positive correlation between GDP per capita and the 'enabling trade index'

However I should state that I do remain an optimist on all this because I believe Trump is a pragmatist and you can see this in the relationship with China over the last few weeks.  Ultimately it is always best to be friendly with one of the biggest foreign buyers of US Treasuries (as nicely captured by the text around the chart below).  China are quite pragmatic too ultimately and are quite comfortable with something like the status quo. 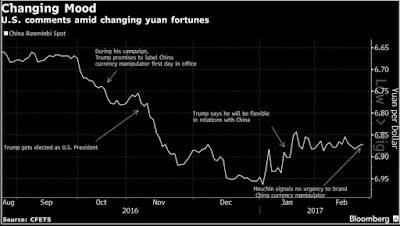 As for Europe I see this on Greece via Seeking Alpha:

Greece must not be granted a "bail-in" that would involve creditors taking a loss on their loans, Germany's deputy finance minister declared, reiterating the government's opposition to debt relief and its differences with the IMF.

Personally...I think a bail-in is quite sensible.

A few final charts.  The US and China ("G2" after all) are leading the way on global billionaires... 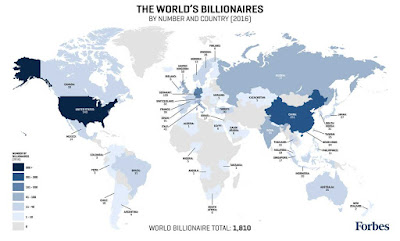 ...rig count numbers in the US continue to build in an indication that activity levels are improving. I still see US$60+ oil by the end of the year due mainly to tighter supply/demand globally than many think: 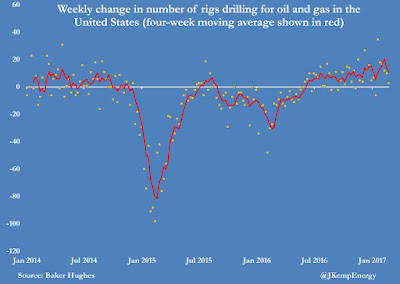 Of course this pushes up oil/inflation: 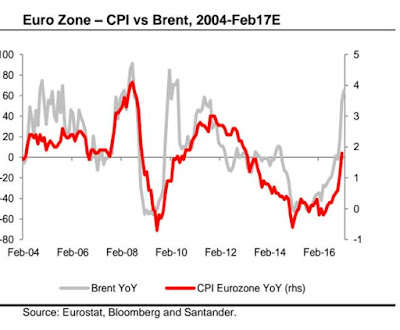 Super on some of the problems in defining 'active' and 'passive' strategies discussed at this link here.

You didn't read the annual Buffett letter?  Always worth a look (link here).  It included this great advice about earnings season...

As well as the up-to-date results of his bet with a fund-of-hedge fund operator: 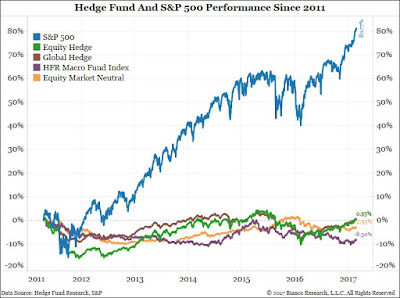 I enjoyed this on fees too:

"Fancy being Warren Buffett? Then worry about the future and not the past" says analyst Chris Bailey

What are the biggest hedge fund longs and shorts currently?  Note the technology love-up in the former: 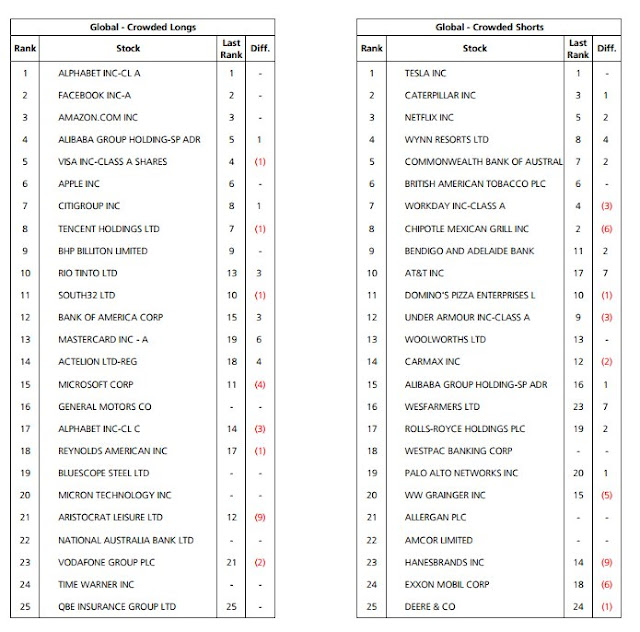 The budget airline easyJet is poised to drop out of the FTSE 100 this week after a price war and fears over terrorism and Brexit sent its shares plunging. The outsourcing giant Capita, the electronics retailer Dixons Carphone and the shopping centres company Intu are also tipped for relegation from the stock market’s top tier in its quarterly reshuffle. The four could be replaced by the pest control group Rentokil Initial, the gold miner Polymetal, Scottish Mortgage Investment Trust and the packaging giant DS Smith.

I also see there is a bit of agitation around Unilever in the week or two since the now aborted Kraft Heinz bid:

The top 10 shareholder said Unilever had been right to reject Kraft Heinz’s approach as it was too low, while the stock element of the offer did “not hold much value”. However, the proposed deal represented a “watershed moment” for the company, which must now focus on “unlocking value”.

A £4.5bn fund set up in 2013 by the Conservative Party treasurer, Sir Mick Davis, to buy up mining firms is moving out of its plush London offices after failing to strike a single deal.
X2 Resources has opted not to renew the lease on its headquarters near St James’s Palace and has put its investment plans on ice after a bounce in commodity prices, according to reports this weekend.

Amazon will soon open a 9,700-square-foot store in Seattle where customers can pick up online grocery orders within a 15-minute to 2-hour time window, according to USA Today. Customers can also order products in-store using electronic tablets, then wait in a “retail room” while their orders are filled (link here).

Can you guess the best performing equity (and bond) markets since 1900?  Well you may be in for a bit of a surprise...  Link here. 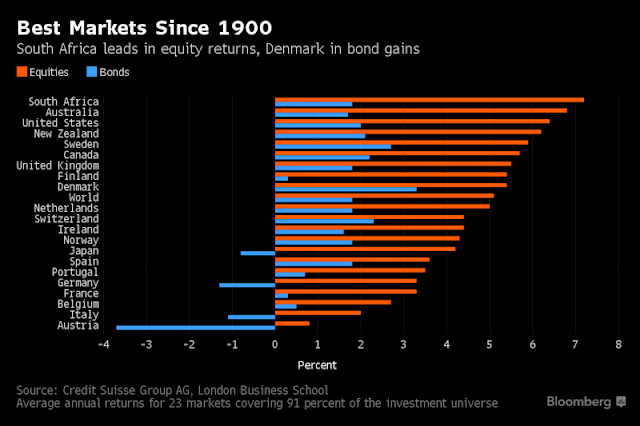