After my day one write-up here, what did I learn from day two of the Asian Financial Forum?

1. In the breakfast panel Lei Zhang of Hillhouse Capital noted that China needed to raise US$1.5 trillion worth of green finance over the next 5 years with 85% likely to come from private sources.  That sounds like a fascinating theme.

3. And the major challenge for the payment technology and cyber security business is...industry standards and then regulation.  I kind of agree with that: 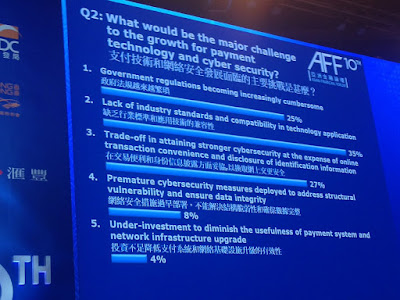 4. In the same panel the most important growth driver was unsurprisingly increased penetration of mobile internet: 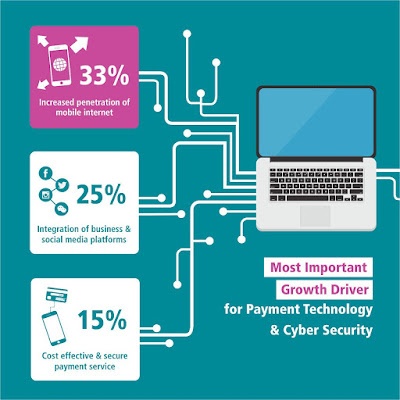 5. A couple of great observations including cross-border payments are up x45 time since 2005 and Melissa Guzy of Arbor Ventures noting that Tencent's Wechat is 'the largest bank'.  The payments and related financial world is certainly changing.

6. Observations from Raghuram Rajan ex Governor of the Reserve Bank of India included:

On India: 'no reason why shouldn't become a strong engine of global growth'

'How are we going to provide jobs?'

'Fed in the middle of a very tricky balance'

'Something has to give' re geopolitical frictions


7. A great healthcare thematic seminar noted that companies including AIA are focusing more on vitality ('know your age') prevention rather than simply paying out on events.

I also learnt via Dr Yach of the Vitality Group that 'vitality age is typically 7 years older than your actual age' whilst Dr Tucker of Tucker Medical observed that longevity is up 40 years since 1900.

8. Turning to an insurance thematic seminar the AIA representative said that the company 'would shamelessly adopt and adapt best practices' rather than always seek to lead innovation, meanwhile the life business has bigger barriers to entry due to the need for personal advice.

10.  Apparently the 'One Belt, One Road' project implies in the infrastructure space 195 projects which could involve the deployment of up to US$300bn.  A lot of money. 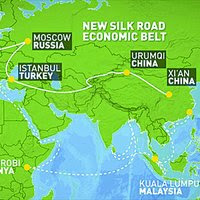 An enjoyable conference.  Congratulations to all involved and I look forward to participating again in the future.