What a last week, eh?  Maybe we should be worrying about the 20 trillion of debt as well as Dow 20k!

And as the chart above and below note, maybe Dow 30k requires a lot more bonds to be generated/sold.  Note the back page of Barrons below! 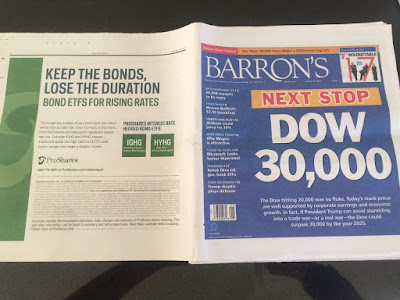 Still...the US economy is still moving report as this report in the Financial Times notes: 'the nowcast models suggest that the probability of recession within 12 months is extremely low, at less than 5 per cent. This compares with more elevated probabilities of 20-30 per cent at times last year. Furthermore, there is a 75 per cent probability that the US economy will experience sustained GDP growth at above trend rates in 2017, an outcome that has not been observed for years' 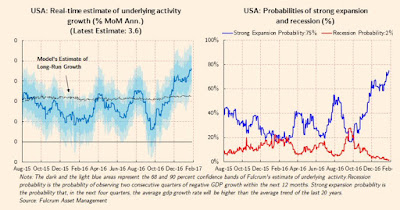 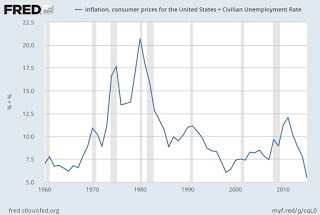 ...the trouble is that life remains complex with the new President and trade matters.  And let's face it...trade matters as detailed in the two charts below here

And of course trade and personnel restrictions can impact sectors...take this below: 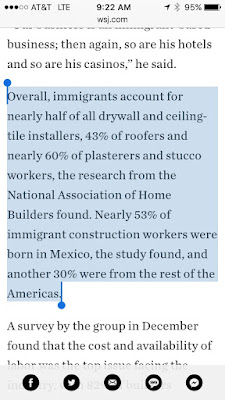 That sounds a bit inflationary and disruptive.  Of course though it may inspire other developments such as the rise of robotics (link here).  And on a related front, this from the weekend's Financial Times from an interview with the Microsoft CEO is kind of fascinating on the rise and rise of artificial intelligence is worth a read (link here).

Despite this uncertainty though, check out where the VIX index is... 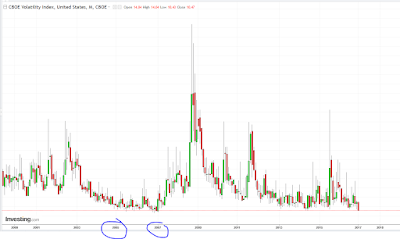 ...back down to levels last seen in the benign run-up to the global financial crisis.  Just look at the level of short interest.  Makes you think doesn't it? 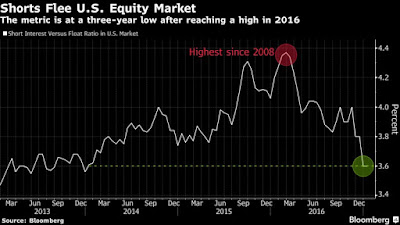 And to put it another way...you could argue that looking at the Dow Jones in gold terms could see a bit of weakness i.e. gold rising relative to stocks. 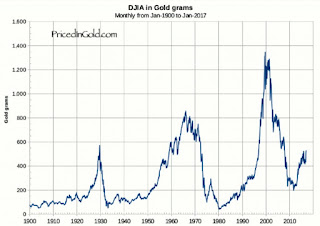 And what do I think? You can find my latest Yahoo Finance thoughts here in my latest column titled:

"Global markets: don’t worry about headlines, think about this"

Of course it is going to be a quieter week in Asia than normal this week: 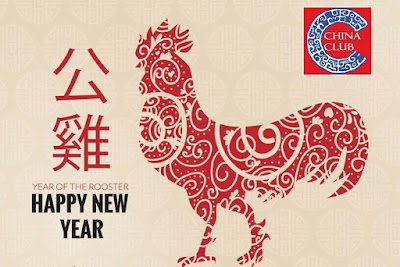 
There are some amazing changes going on over the Chinese New Year period.  Take this: 'over the six-day Chinese Spring Festival period last year, 516 million people sent and received 32 billion digital red envelopes - 10 times the number as over the same period in 2015' (link here).  Wow - what a trend!

How about this however drawing together some of the themes above?

'War with the US under Donald Trump is “not just a slogan” and becoming a “practical reality”, a senior Chinese military official has said. The remarks were published on the People’s Liberation Army website, apparently in response to the aggressive rhetoric towards China from America's new administration' (link here).  It makes you think...and also noteworthy to look at the difference in the relative NATO military expenditure levels: 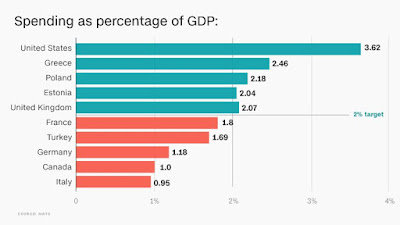 Moving onto related matters.  Oh to be on the call between President Trump and the Russian President... 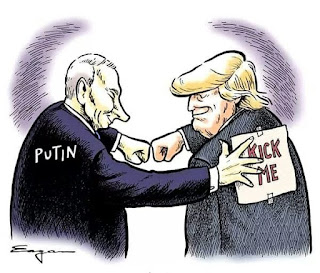 ...and talking about Russia it ranks quite well in the shifting CDS landscape: 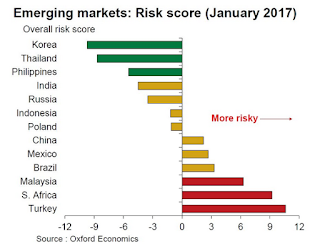 Despite some of the above the MSCI World ex-US index is rather well... 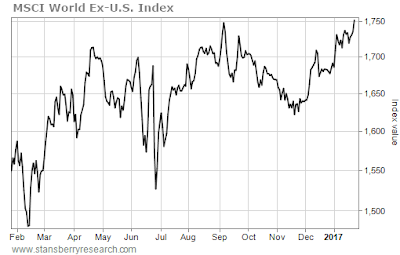 ...and helped by this is a better-than-expected performance in Europe. Take this on the UK economy: 'All but two out of 19 economists in the Bloomberg survey see the MPC raising its growth forecast for this year, while the majority see the panel also raising its inflation projection. However, most see the bank leaving its estimates for next year unchanged' 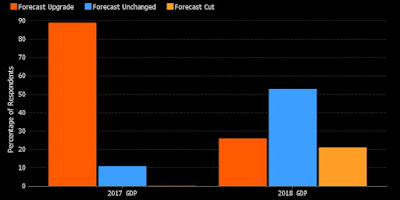 And also good potential news here re the UK signing trade deals: 'BRITAIN is in line to sign THREE major trade deals within 12 months of leaving the European Union, a new report says. South Korea, United States and Brazil could strike free trade agreements with the UK before 2020'

However note that none of this is imminent...and the risks out there e.g. this from the NIESR: 'we expect that leaving the single market will be associated with a long term reduction in total UK trade of between 22% and 30%, depending on whether the UK concludes an FTA with the EU or not' (link here)

Moving onto Europe and a couple of stories via Seeking Alpha:

The IMF believes Greece's debt is "explosive" and "highly unsustainable," reaching 275% of GDP by 2060 unless the country's loans are significantly restructured. The assessment, prepared ahead of an IMF board meeting on Feb. 6, is significantly more pessimistic than that of Greece's eurozone creditors and underscores the difficulty of the fund moving ahead with a bailout.

Twenty billion euros earmarked by the Italian government will be enough to help recapitalize other weak lenders after Monte dei Paschi, according to Bank of Italy governor Ignazio Visco.

A few final stories in this section...

In investment management this Financial Times report notes that 'there was “lots of evidence” to suggest that smaller managers were more nimble and delivered outperformance, even though they shouldered a heavier burden of regulatory costs' (link here).  I agree with this...got to get/stay active to outperform especially in today's world. 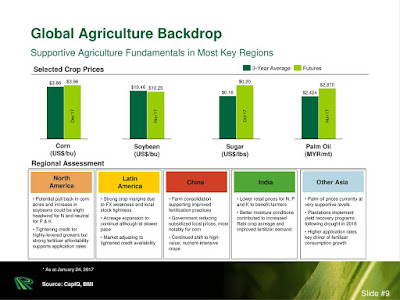 Fascinating new emerging technologies.  Which one is your favourite? 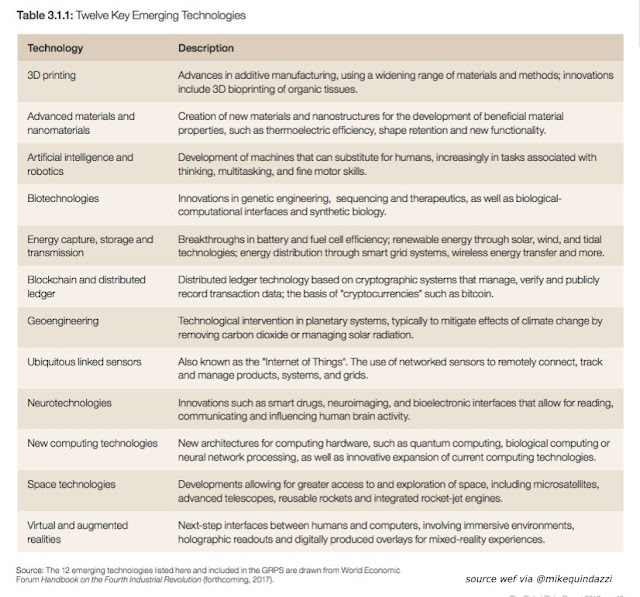 Have you been noticing that salmon is getting more expensive? Well here's why... (link here) 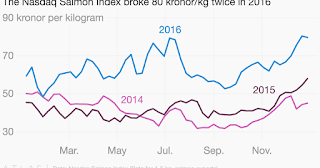 Another big week upcoming in earnings season...so far it is progressing reasonably well/opportunities are out there:

Insiders are selling though...that's a negative:

Snap — the makers of Snapchat — had confidentially filed for its IPO late last year, but it looks like we’ll be getting a look at the inner guts of the company’s financials and workings as early as late next week (link here)

Lovely article here on the (typically) positive aspects of spin-offs 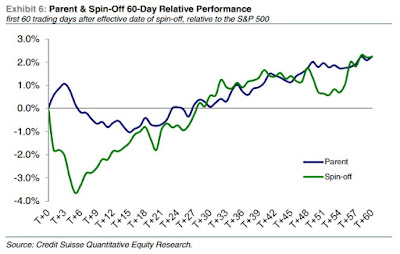 This via Seeking Alpha: 'Chancellor Angela Merkel on Saturday decried unfair tax advantages for multinational corporations, singling out Starbucks as a tax rogue that exploits global arrangements at the expense of German chains. "Coffee-house operators from Germany have to pay their taxes, while it's not at all clear with Starbucks whether they pay taxes anywhere," she told CDU supporters. "That's not right and we have to do something about it." '

Potentially good news for travel companies in the UK/Europe: 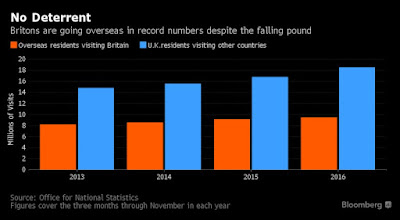 'O2's owner has set the ball rolling on a strategic plan to clear legacy issues before either floating or selling the British mobile phone operator, according to reports...Singapore's sovereign wealth fund, GIC, is working with private equity fund CVC to buy a controlling share in Telefonica's infrastructure division in a deal worth €1.5bn (£1.3bn), the Sunday Times reported' (link here) 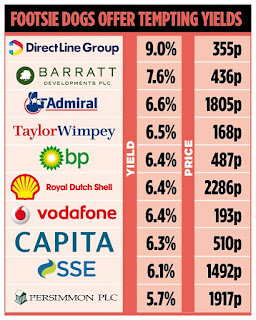 
“Many people agree — they can’t stand the open office,” he says. “They never get anything done and have to do more work at home.” (link here).

‘Oh Yeah,’ the Song from ‘Ferris Bueller’s Day Off,’ Is Catchy, Irritating and the Origin of an Investing Fortune. The quirky techno tune, which accompanied Ferris’s Ferrari escapade and loads of other advertisements and Hollywood comedies, helped create a lucrative investment career for its Swiss co-creator'