So it is President Trump now...  Lots of chat about this inevitably including the observation that:

'Trump’s supposedly “patriotic” approach is thus a recipe for a mediocre future of the U.S. manufacturing sector. It does next to nothing about Trump’s presumed real goal – bringing back well-paying jobs' (link here).

I would agree on this...the theory of comparative advantage tends to drive decisions after all... 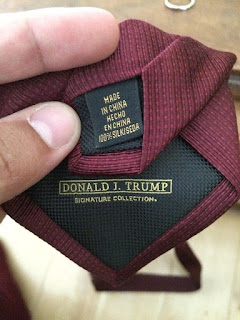 And on a related front...

'Since last Autumn I am really pleased to have started writing a regular column for Yahoo UK/Ireland on finance and the investment markets.  You can find here my latest column titled:

You see pragmatism is required if the US is going to grow (as Trump hopes) at 4% a year because recent history suggests it is tough.

Plus of course the starting point is one of a strong performing market and fading sentiment... 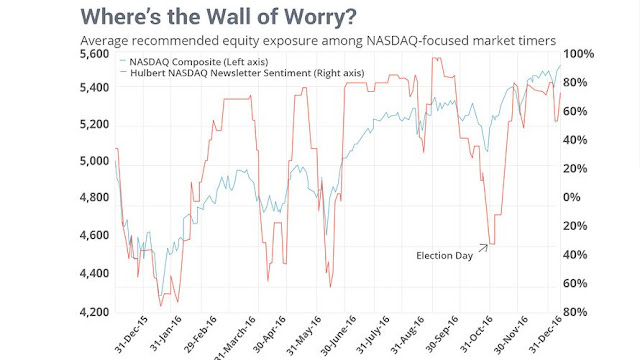 Plus check out this (link here) on relative valuation around the world.  The US is hardly cheap!

Still - as I have been arguing consistently over the last few months - the key is to look at the level of the US dollar and if it fades then this is positive for the global economy in terms of balance.  So far...the start of a trend?

The implications of a lower dollar could be very positive for the euro (and the Pound) and help turnaround the big outflows of 2016.  Of course there is European politics too.  Some quite striking rhetoric from the French far right's leader (a key participant in the most eagerly awaited election):

"2016 was the year the Anglo-Saxon world woke up. I am sure 2017 will be the year the people of continental Europe wake up" (link here).

I think centrist politicians/coalitions prevail in Europe in 2017.  The key (aside from the French election) will be German leadership and on this basis the following is worth a read:

'...in the months ahead, Germany seems ready to continue down the path of multilateralism that it has followed since the end of World War II' (link here)

Yes, Germany / the Merkel leadership is key...and at least the local economy is growing solidly at the moment which should give a few positive options and may help form the basis of a better European economy:

(By the way the chart above and below plus the CDS chart later is sourced from this very nice weekly macro summary review by @KurterOzde link here).

How about the other large European economy the UK?  Well let's not forget it really has been all about the Pound and its impact on certain type of exporting-centric/dollar revenue sort of company as shown below... 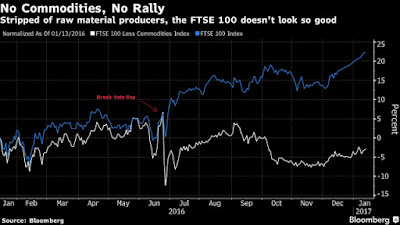 And what about the Brexit debate?  A useful read here and I kind of agree with the sentiment:

'Yet for all its superficial firmness and clarity, this was a speech constructed from illusions. The overarching fantasy was that Brexit is a process over which Mrs May has complete control' (link here).

Of course a big week for the whole Brexit debate as on Tuesday the UK's Supreme Court will give their verdict on whether a parliamentary vote is needed to trigger Brexit.  As per Seeking Alpha:

'A cross-party group of MPs is plotting to thwart Theresa May's "hard Brexit" plans amid fears that U.K. businesses could soon have to pay huge export tariffs on goods they sell to the EU...If a vote is required, the MPs will seek to amend legislation to make an extreme Brexit option impossible'

Meanwhile despite all the recent chat about London losing bankers to Frankfurt and Paris among other capitals, it is not all negative:

'London will probably end up winning the battle over its clearing industry, according to four top bankers in Davos, adding to the debate over whether the U.K.’s financial industry will be stripped of a crown jewel' (link here). 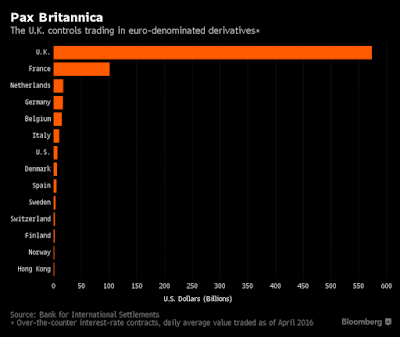 A few final macro charts of note.  Fascinating how the United States has a poorer Gini Index than Europe showing less income equality in the former: 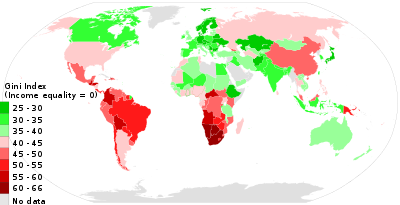 And talking about the US system a final economic legacy chart on the Obama Presidency below via @Macro_View.  Just look at that falling labor force participation: 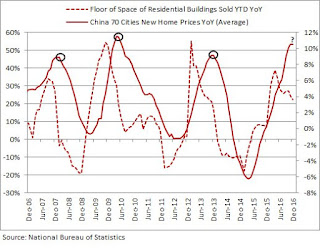 Wow...Turkey's CDS default probability is consistently a lot worse than Mexico's.  Shows that despite the latter's Trump negative, Turkey has more structural issues: 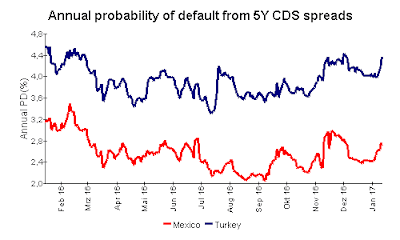 And before we move to sector and companies I really liked this via @Callum_Thomas on the potential for active management swinging back into fashion.  Macro volatility and great dispersion tends to lead to this...I would be in clear agreement this will be a clear investment thematic trend for 2017: 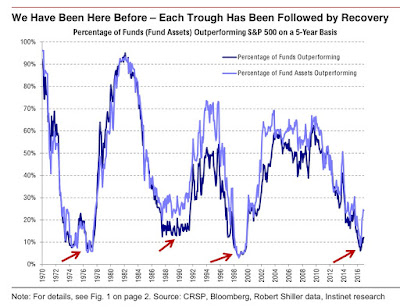 The financials and Disney have performed best since Trump was elected.  Maybe says more about bond yield shifts? 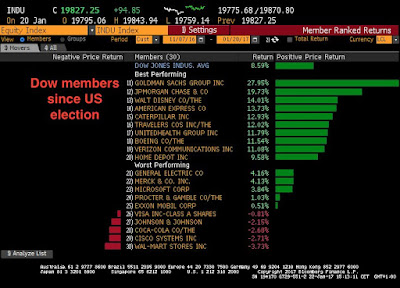 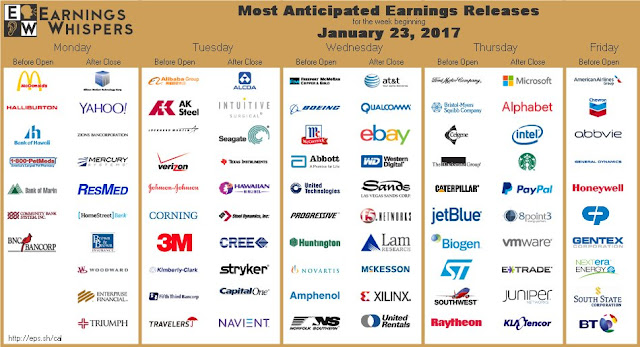 And as I noted on Twitter after seeing this chart: 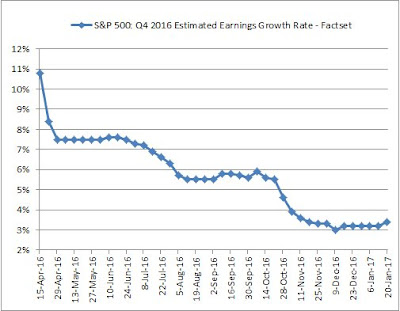 And insiders are neutralising.  Sounds like a stockpicking market to me...

A few other stories, predominately from today's Sunday Times:

'One of Bovis Homes’ top investors is pushing for a £5bn merger with a rival after the housebuilder’s chief executive resigned over a shock profit warning. Schroder Investment Management, Bovis’s second-biggest shareholder with a stake of about 6.4%, is understood to have written to Berkeley Group, a bigger competitor, urging it to consider an all-share merger'  Deals in this space tend to occur near peaks...hmm.

'Ministers are poised to scrap a planned sale of the Green Investment Bank (GIB) to Australian investment firm Macquarie, pushing instead for a £3.8bn stock market listing…The privatisation could be even larger than the £3.3bn stock market listing of Royal Mail in 2013'.  Bit embarrassing.  My guess is a so-so or better market is required for this to happen.

'Barclays has stepped up its fight against the US Department of Justice over its role in the selling of toxic mortgage securities in the run-up to the financial crisis. A lawsuit filed last month accuses the bank of misrepresenting the quality of $31bn (£25bn) of home loans between 2005 and 2007. Lawyers for the British giant will submit a motion to dismiss the lawsuit in New York in the next 90 days. Barclays is the only bank contesting the allegation that it deceived investors'.  They will settle like Deutsche/Credit Suisse etc. in my view...and much is factored in. I still think the shares are ok value.

And via Seeking Alpha:

'Foxconn and its Japanese subsidiary Sharp are considering setting up an display-making plant in the U.S. in an investment that would exceed $7B, CEO Terry Gou confirmed on Sunday.
The plans, which come after President Trump's "America First" inauguration speech, still depend on many factors such as investment conditions that would have to be negotiated at the state and federal levels'.  Interesting if it happens

'Saudi Basic Industries Corp. has signed an agreement to acquire the 50% that it doesn't already own in its petrochemical venture with Shell Arabia, a unit of Royal Dutch Shell, for $820M. The venture, known as SADAF, was established in 1980 and operates six petrochemical plants with total annual output of over 4M metric tons a year'  Another bit of simplification from an oil giant. 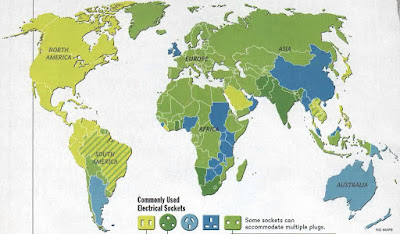