I am attending the Asian Financial Forum (read all about it here) in Hong Kong currently.  Here are ten things I learnt from day one of the Forum...

1. Forum participants are more optimistic about the outlook than this time last year.  As per the poll results below more optimists, more neutrals, fewer pessimists. 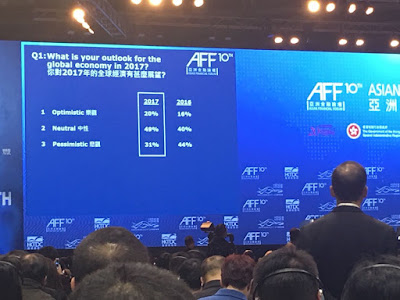 2. A majority of Forum attendees believed the Chinese government GDP estimates for 2017 of between 6-6.5% have credibility: 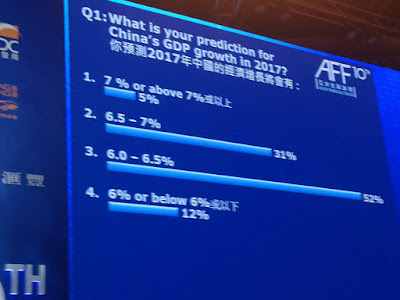 3. The greatest risk out there is very simple: it is Trump's policies.  A fragile recovery in Europe / Brexit barely register... 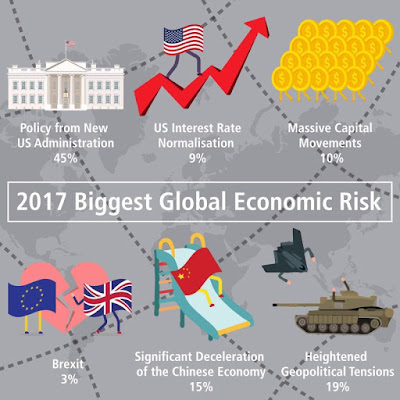 4. It is G2 all the way in terms of hopes from investors for the best investment returns in 2017.  Europe and Japan are way down the list. 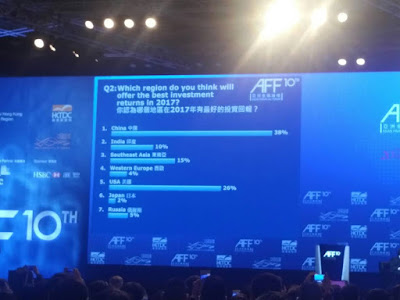 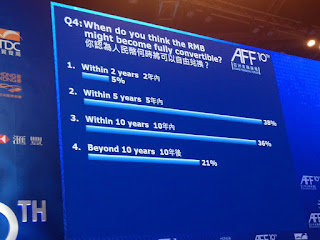 6. I am not surprised to see that the most popular driver to Chinese economic growth in 2017 remains centred on domestic demand but note how relatively evenly spread this aspect along with proactive fiscal policy, liberalisation and structural reform and belt and road initiatives are.  In short there is not a very clear view. 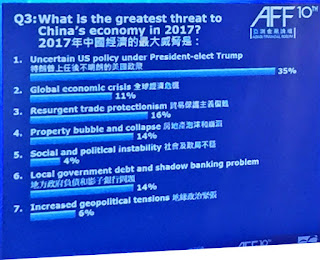 8. Famed strategist Mohamed El-Erian was very clear in his key note speech noting political instability ('the more ineffective they become, the more vulnerable they become'), a lack of trust ('we have a lack of trust in the system') and in terms of solutions we 'need a policy revolution...and that's unlikely to happen'.  Ultimately however the better news was that at least there was a good amount of pessimism in the system already.

9. And this optimism despite everything was apparent too in the comments by Klaus Regling of the European Stability Mechanism who noted that 'Europe is not falling apart' as 'uncertainty does not always lead to problems' and that a far greater proportion of European citizens had seen real income growth recently than their equivalents in the US.

10. And staying with the positive comments a star-packed China panel including the Chairmen of PWC Greater China, China Huarong Asset Management, Sinochem Group and China Construction Bank Corporation concluded that 'opportunities are greater than challenges' and 'China's economy survives despite all the naysayers'.  There was even a bit of breaking news for stock watchers as reported below by Fast FT:


The head of Chinese state-owned conglomerate Sinochem has firmly denied plans to merge with rival chemicals firm ChemChina, after reports of discussions unnerved investors betting that ChemChina will buy Swiss seeds and chemicals maker Syngenta.
In response to a question of whether Sinochem planned to buy ChemChina, Ning Gaoning, known to international investors as Frank Ning, told a forum in Hong Kong: “No, this rumour is very old.”