No surprises that the IMF Communique from their annual meeting was a bit same old, same old:

"The persistently low growth has exposed underlying structural weaknesses and risks further dampening potential growth and prospects for inclusiveness," the IMF's steering committee said in a communique following its annual meeting in Washington...We reinforce our commitment to strong, sustainable, inclusive, job-rich and more balanced growth. We will use all policy tools - structural reforms, fiscal and monetary policies - both individually and collectively."

But actually is the world economy in such a bad space as a few years ago?  Apparently not... 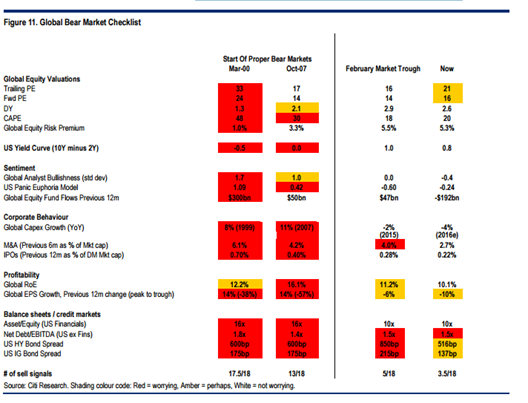 Well the glass is always half-full...

Turning to the US economy, I see that the surprise index has neutralised up...dangerous if the US dollar goes up any more in my view... 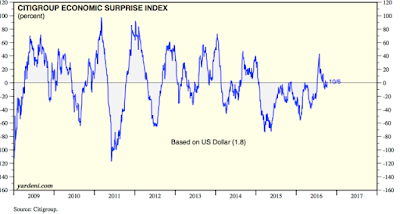 ...as for Friday's NFP data it was a bit of a shrug of the shoulders. Still the big trend remains suppressed initial claims and labour force participation:

Meanwhile we await the next Presidential election debate later today meanwhile there is lots of interesting information and scenario analysis is this Newsweek article entitled: 'TRUMP IN TURMOIL: 5 WAYS FORWARD FOR THE 2016 PRESIDENTIAL RACE'. 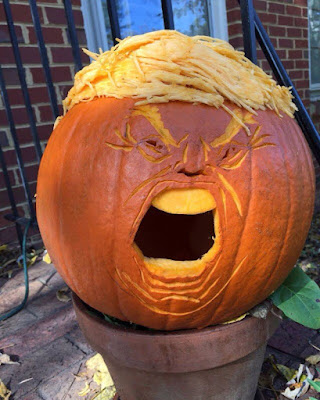 Lunacy from the world's largest fund manager Blackrock? This report noted that 'the Chicago Fed National Activity Index (CFNAI) , my preferred leading indicator, recently fell back into negative territory…I have watched this indicator long enough to know that it is telling us something and it merits our attention'.  Hmm...seems to have been in negative mode for quite a while...not an indicator that I particularly like personally. 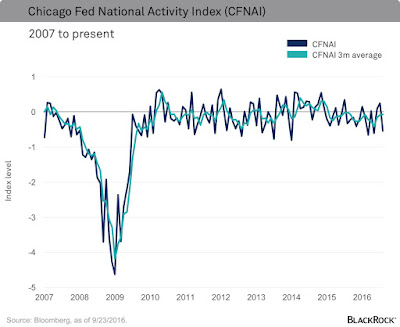 Turning to the European economy I see that the Financial Times has done some nice analysis on the potential beneficiaries in the financial sector from Brexit.  Germany is the winner... 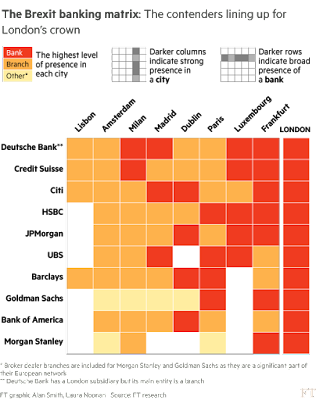 ...a warning that the UK economy may struggle in a harder Brexit scenario.  So far the local economy has been aided by the lower Pound and the boost to manufacturing... 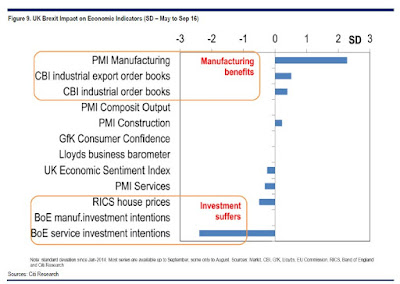 Of course on the lower Pound read my article on Yahoo Finance titled:

Stop panicking about the Pound…it is now too cheap

Meanwhile in asset allocation bonds have been poor performers as noted in the couple of charts below: 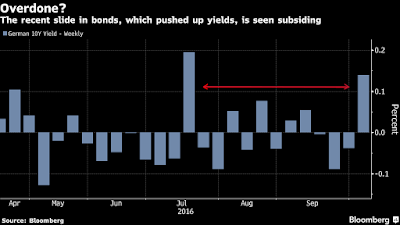 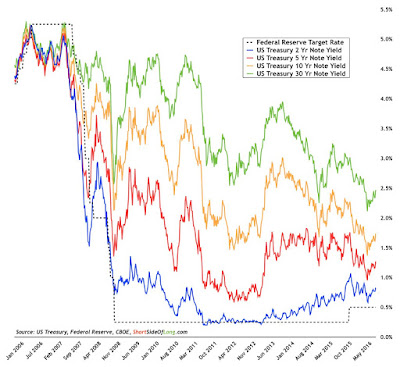 Give me an opportunistic selection of equities rather than fixed income at the moment.  But what about gold? I generally have concluded that a sensible pension allocation is to have around 10% exposed to precious metals - a strategy that has worked well this year to date.

Nevertheless a poor week for precious metals last week and @Smaulgld muses here that the Chinese holiday may have had an impact.  Generally though gold demand has not been what it was previously in some key emerging / important markets... 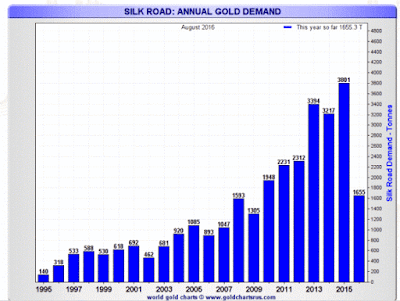 Fascinating post on fertility and robots here including the observation that:

China's services sector created jobs at the fastest pace in seven months in September as new business picked up, even as Caixin/Markit's services PMI slipped fractionally to 52.0, from 52.1 in August.  That sounds workable...

Think you know China? A couple of interesting facts via @east_asia_forum around the geopolitics of China from this report.  As I have noted before China plays the long game better than anyone...

'of the US$5.3 trillion in trade that passes through the South China Sea each year, around US$4 trillion is to and from China. Obviously, it has no interest in blocking this...success that China is having in moving up global value chains is evidenced by its share of world trade reaching 14.6 per cent last year, a huge leap from 12.9 per cent just one year earlier' 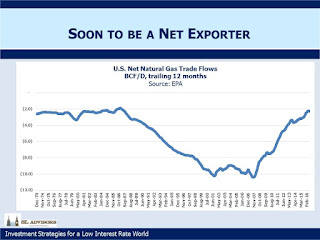 S&P 500 earnings continue to exhibit the pattern of muted in 2016 but the age old hope of n+1 double digit growth... 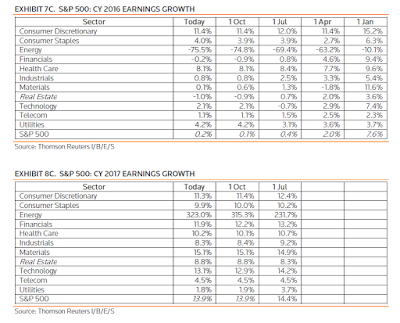 I would agree with @TomWinnifrith that Misys is one UK returning IPO to be sceptical of (link here):


'Anyone can buy sales and earnings growth if you borrow and buy enough. But does that make Misys a good business? How will it cope when base rates rise? The same management who inspired no love back in 2012 are still at the helm, will they do any better this time?'

And some further UK corporate stories via The Sunday Times:


Hard Brexit to cost 2,000 Goldman jobs: Goldman Sachs is preparing to move almost 2,000 highly paid staff out of London if the government opts for a “hard” break from the EU.

Leaving EU could delay new drugs, warns Astra chief: The Chief Executive of Astra Zeneca has warned that patients could face delays in receiving life-saving medicines unless a common drug-approval system is agreed during Brexit talks.

Fraud squad digs deeper into ENRC: The Serious Fraud Office has ramped up its investigation into ENRC after a landmark £331 million bribery settlement in America.

William Hill and Amaya in talks to create £4.6 billion betting giant: The UK’s William Hill and Canada’s Amaya are in discussions that could lead to a £4.6 billion all share merger to create one of the world’s largest gambling companies, as the groups become swept up in the wave of consolidation hitting the betting industry.

And via the SCMP:

Alibaba Group’s financial affiliate has appointed a new chief executive officer as it prepares for a highly anticipated 2017 initial public offering...The management shuffle comes as Ant Financial is said to plan an IPO in Hong Kong next year, which could be one of the city’s biggest debuts since 2010. Since its inception as the operator of Alipay, Ant Financial – an online payments system with 450 million active users – has expanded into wealth management, credit scoring and peer-to-peer lending.

Well that sounds an exciting tech IPO to come...just as Snapchat could be: 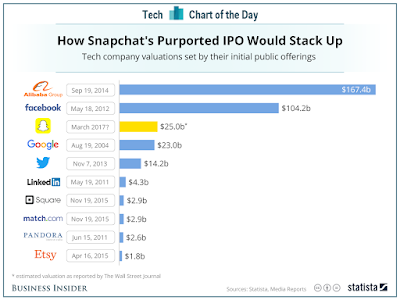 Thanks to @GreekAnalyst for this and the brilliant one word description: 'KARMA'! 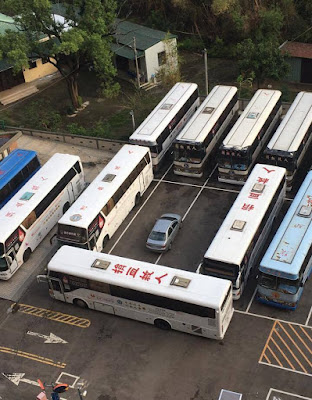 And a final reminder that for the direct stock investors among you please access my 'Q3 performance and Q4 ideas webinar recording/chart presentation' here.

Have a good week
Posted by Chris Bailey at 19:50