I had the opportunity to attend the S&P Dow Jones Indices 10th Annual Commodities Seminar yesterday... 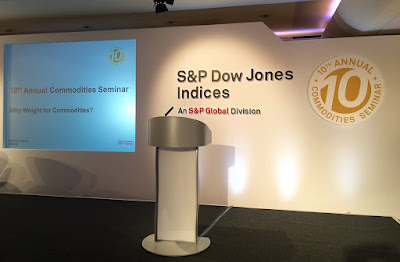 ...so what did I learn from the event with general applicability to investment markets?

1. It has been a bad recent performance run - Jodie Gunzberg of S&P Dow Jones Indices noted 'the most widely-recognised passive commodity index...lost about 10% annualised over the past 10 years'. Nevertheless Larry Antonatos of Brookfield thought that having '10-20% in real assets...made the efficient frontier (of a portfolio) better', a point supplemented by Viktor Nossek of WisdomTree Europe who said if you 'mix them all up' then a commodity combination can bring volatility levels down to FTSE-100 equivalents. Meanwhile Kevin Norrish of Barclays said they had 'raised the price targets of all of the commodities we cover in the last few weeks' and that the usual bad Q4 performance run will be 'different this time' in 2016.

2. Asia is still all-critical.  Michal Meidan of Energy Aspects noted the region was responsible for additional demand of 1m boe/d but on China specifically she took the view that shifting political sands meant that 'if the market had been paying more attention it would have been spooked more'.  Kevin Norrish of Barclays also thought that the 'upward revision to Asian growth was very important' for commodity demand.

3. Big picture on flows included the comment by Kevin Norrish of Barclays that non-gold commodity sector inflows were the best since 2010.  2016's flows had been approximately half into gold...but historically this proportionately was not unusual.

4. Oil was uppermost in people's minds especially so close to the Algiers disclosures.  Blu Putnam of CME Group observed he 'didn't believe the Saudi deal means anything'.  Michal Meidan of Energy Aspects however said the deal potentially 'accelerates a rebalancing that is clearly underway' and that a lack of current investment meant that US$70/80 oil in 2017-18 was 'plausible'.  Kevin Norrish of Barclays agreed and also noted that he was 'inclined to think that US supply would be sticky on the way up'.

5. Other commodity calls included Kevin Norrish of Barclays saying that 'the big laggard is copper' due to the lagged impact of high investment levels, Fiona Boal of Fulcrum would be long hogs.  David Donora of Columbia Threadneedle would be short sugar.  Michael Jansen of Red Kite would be long zinc but short nickel whilst Dave Ernsberger of S&P Global Platts would be long European diesel.

6. Flows matter.  Otto Van Hemert of Man AHL said  that 'who else is participating in the market is important'.  Meanwhile Arun Assumall of Macquarie observed that he is 'obsessed about the positioning data' and that 'liquidity means more opportunity'.  David Donora of Columbia Threadneedle noted thinner markets due to tougher regulation

7. Weather was a constant theme.  Blu Putnam of CME Group said La Nina was not forming as strongly as anticipated but he was still thinking less rain in Brazil (impacting hydroelectricity/agri production) but more moisture/a colder winter in the US.  Abdolreza Abbassian of the UN also agreed that 'La Nina is basically not existent for the US'.

8. Agricultural issues were also widely discussed.  Abdolreza Abbassian of the UN thought that China's 'mountains of grain' probably was not wholly usable but disclosures remained low but also noted - thanks to the weather - record production in a variety of places in the world including Kazakhstan.  Blu Putnam thought that high US production was aided by 'amazing big data use'.  Fiona Boal of Fulcrum thought the markets needed a 'weather disaster' to get going.

9. As for trading Blue Putnam of the CME Group observed that institutionally they were seeing much more 24 hour trading of commodity contracts due to greater interest from the Asian time zones.

10. So where do we go from here?  Blu Putnam of CME Group called the 'next decade a trading decade'.  Kevin Norrish of Barclays said that the critical tipping point for a structurally positive commodity view was when the world grew by more than 3.5%.

A really useful conference so congratulations to all involved - and it also helped me discover the Indexology blog (link here) which looks like a great resource.

Looking forward to participating in the 11th annual commodities seminar next year.