PMI day in Asia was inevitably led by China where following the fall of the official PMI :

'...the final HSBC/Markit Purchasing Managers' Index (PMI) for January came in at 49.7 on a seasonally adjusted basis, just below the 50.0 level that separates growth from contraction. The number was slightly lower than a preliminary "flash" reading of 49.8 but higher than the final 49.6 in December'

Looking at the detail there was marginal expansion in new orders and new export orders, although both were revised downward from the earlier "flash" estimates whilst the jobs metric shrank for the 15th consecutive month, although the rate slowed, with the subindex reading at 49.5 in January compared to 49.3 in December. 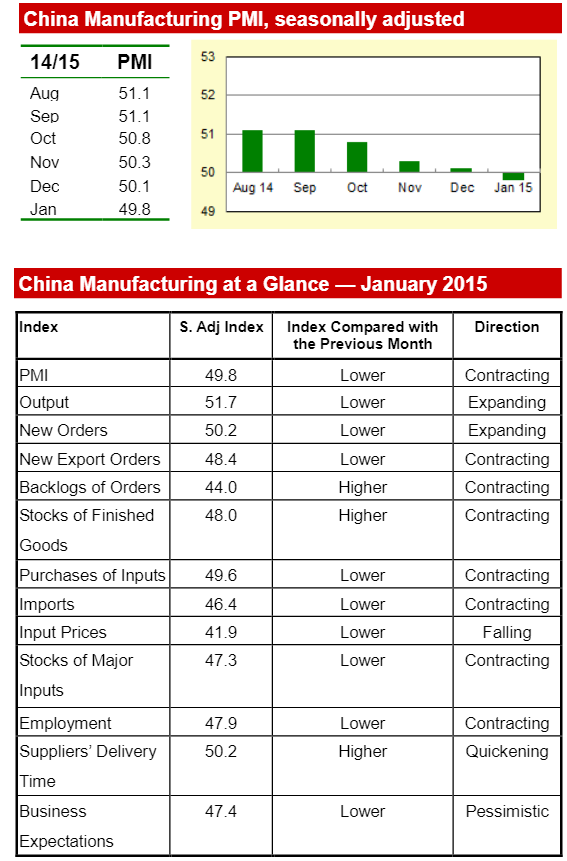 Following the publication of the dull official statistics on Saturday the above should have been no great surprise.  Inevitably the market fell back (although still above that psychologically important 3k index point level) and as the headlines noted the yuan:
'Sunk to a Record 1.94% Discount To PBOC's Fixing'
Still sounds like to me pressure for more stimulus.
In some of the other Asian PMI comments released today:
Japan - Solid production growth registered at start of 2015
Indonesian - Business conditions continue to deteriorate at start of 2015

In short, a mixed bag.

Talking about South Korea, did you see that its overall market cap has just exceeded Australia's?: 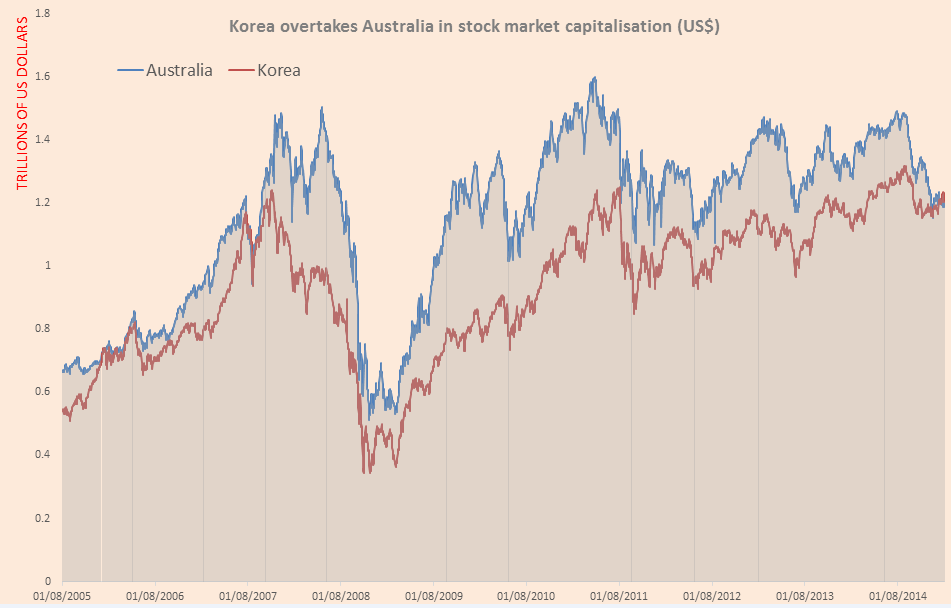 Elsewhere I notice continued two-way pulls for the Chinese market. For example, better news on housing...

...but in the corporate world the impact of the anti-corruption crackdown continues as China Minsheng Bank fell nearly 5% in Hong Kong trading.  This followed the revelations on Saturday (via Fast FT)

'...that its president and director Mao Xiaofeng had submitted his resignation in "recent days," amid domestic media reports that he is under investigation by anti-corruption authorities. Minsheng's statement said that the bank had "noticed" media reports about Mr Mao but that as far as it knew Mr Mao had resigned for "personal reasons" '

Elsewhere according to the 2014 China Luxury Report, which was released on Saturday by the Shanghai-based research center Fortune Character Institute, 117 million Chinese tourists visited abroad last year, a 20 percent year-on-year increase. Total luxury purchases by Chinese consumers overseas rose by 9 percent to $81 billion, while luxury purchases in the domestic market declined by 11 percent to $25 billion. A strange combination...

(nb @jpwwhite123 observes to me that this is likely to be tax related).

Finally what a China/pollution chart via the South China Morning Post: 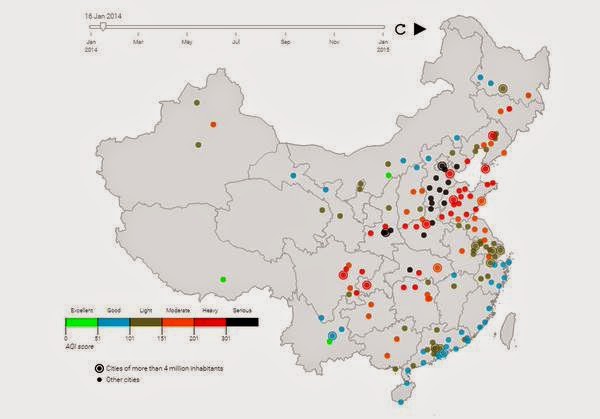