A few weeks ago I walked through the preliminary appraisal of the latest quarterly numbers from Samsung concluding after an appraisal of the smartphone and (importantly) memory businesses that:

'...once you get around that x6 EV/ebit level then anything is possible if the balance sheet is good hence why I am waiting for the cash flow generation...but also have a Won1.2m flag price'

Well the shares have moved a little away from this level but with more detail how should we now be thinking about the stock?

So what about the future?  Well the semiconductor division outlook was suitably positive in both the DRAM and NAND areas...

Cash flow is also a good indicator.  A full year increase in net cash of Won12trn was good especially as there was a dividend/buyback effort ongoing as well.  I estimate underlying free cash flow in FY14 to be running at around the equivalent of a 5% cash flow yield: 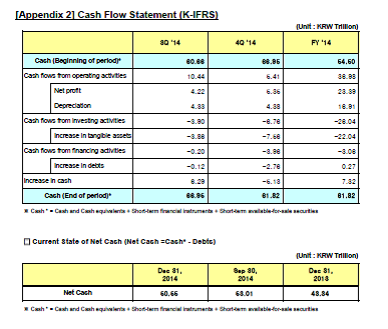 However, as this WSJ report notes, 'Robert Yi, head of Samsung investor relations, said during a conference call with analysts after the release of earnings that it was too soon to offer guidance on 2015 dividends, and pushed back against suggestions that it was close to a stock split'.  That is a disappointing amount of caution in my view.

What else can be taken from the conference call? I thought this was interesting on the now hugely important memory division:

'A lot of this fresh optimism is built on the company’s advanced 14-nanometer chip manufacturing facility. Company executives confirmed during the earnings call that this high-tech facility is currently being ramped up and on schedule to account for 30% of its non-memory chip output by the end of this year'

So overall thoughts? I stick with my Won1.2trn buying level given the above.  That would be the equivalent of a x6 EV/ebit ratio which feels appropriate given all the net issues above.