It is all about the companies now: earnings season frenzy & stock picking potential

I see that Societe Generale are out with another doom/gloom missive about a 'shrinking dollar economy' impacted by the strong US dollar and fading international momentum.

I would be in agreement with many of those trends (as I discussed last week here) but even with this and continued clear disinflation elsewhere (as shown by this stunning chart on Italy below)... 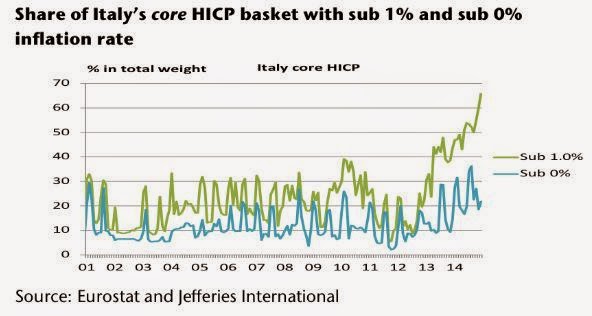 ...we are now entering the critical (and heavy newsflow) part of the corporate earnings season as shown by this hugely helpful (and free) earnings calendar (link here).

Three quick observations on some company data that has come out in the last few hours at the start of the earnings frenzy:

I see both Baker Hughes and Halliburton are reporting on Tuesday.  As I wrote up a couple of days ago I believe this particular benefits Schlumberger (link here).  Anyhow, I see that the activist investor ValueAct has upped their stake in Baker Hughes.  A good sign for out-of-favour commodity influenced sector investors.

Staying in the commodity space, Rio Tinto 'in a set of production figures published on Tuesday morning...revealed that its flagship iron ore division had narrowly beaten its target of 295 million tonnes, by exporting 295.4 million tonnes' (link here).

Even more importantly I note they are talking about hopes for further return to shareholders augmentations.  It is an interesting moment for Rio's stock poised (in Australian dollar terms) midway between the A$50 and A$60 levels.

Given a choice I would still prefer BHP Billiton ('helped' by its energy interests is trading more overtly closer to 3 year lows) but generally it is a big moment for the mining stocks - which along with the energy names are amongst the most disliked in the market (and hence are amongst the most interesting).

Finally, I like agricultural shares and Mosaic's update on Monday (even though the US market was closed) struck me as interesting and supportive for the area:

'phosphates and potash margins will exceed previously provided guidance ranges, and that potash volumes will be at the high end of guidance range'

Given elsewhere in the release that Mosaic remain excited about prospects I would expect the share to push closer towards the top of that US$40-50 range they have been in during the last year. Full results are due in the first half of February:

Again, if out-of-favour areas are coming up with interesting/generally positive news at the margin then the potential for stock picking led gains are apparent.

I reiterate that I believe 2015 will be a great year for stock pickers.