1. Another day of volatility...let's face it though it had little to do with the World Bank economic growth downgrade and much more to do with the animal spirits of investors. 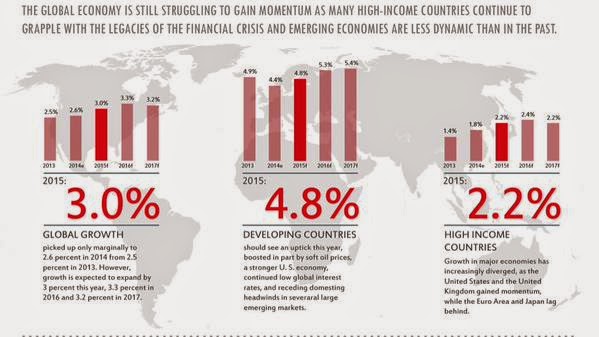 2. Mining and energy shares were again in the vanguard of the falls.  The poorer capitalised got slammed but many others - despite the commodity price falls to around new 5-6 year new lows - did not take out the levels seen in mid-December (e.g. amongst the names I watch especially closely Billiton, BP, Apache, Chevron).  Despite the lurid headlines...that is interesting.

3. I bore myself looking at the legal cost heavy J P Morgan numbers.  Wells Fargo was less impacted but also did not move me.

4. By contrast the GM indicative 2015 guidance was kind of interesting.  Certainly they are not short of confidence despite some interesting generational trends in the space:

5. Elsewhere the European Court of Justice bundled together a few words about a 2011-12 European stimulus programme called the OMT which will help - at the margin - to facilitate QE (if Mr Draghi can swing the governing council of the ECB - not given but surely required).  This comment from the opinion made me smile: