Guess what was the biggest subject on Twitter yesterday after the US market close?  Yes, it was...the Twitter results.  Here are the two charts that keep on appearing in write-ups.  First, the timeline views dip (people looking less at Twitter) and then... 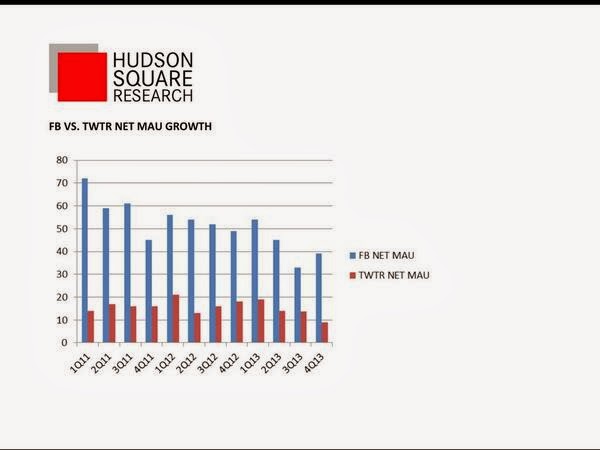 Interestingly, using the second of these two charts, is it then appropriate that Twitter's market cap is a quarter (using yesterday's market close) of Facebook's...more on that later.

If you look at the overall numbers, as Seeking Alpha noted, the numbers were actually good even if - for the reasons shown in the charts above - the shares dumped afterwards.

'Twitter's (TWTR) Q4 earnings beat Street predictions but shares plummeted 18.9% premarket after Timeline views fell 7% on quarter to 148B. On the earnings call, CEO Dick Costolo admitted that Twitter needs to become easier for new users to grasp, although he also said that Timeline views are an incomplete picture of engagement. Twitter made an adjusted profit of $9.7M in Q4 vs a loss of $271,000 a year earlier, EPS was $0.02, and revenue more than doubled to $242.7M'.

I thought there were two other good charts from the quarterly report with strong proportional progression.  Here's the ebitda change (still trading on x467 FY13A ebitda though and the company remains loss-making)... 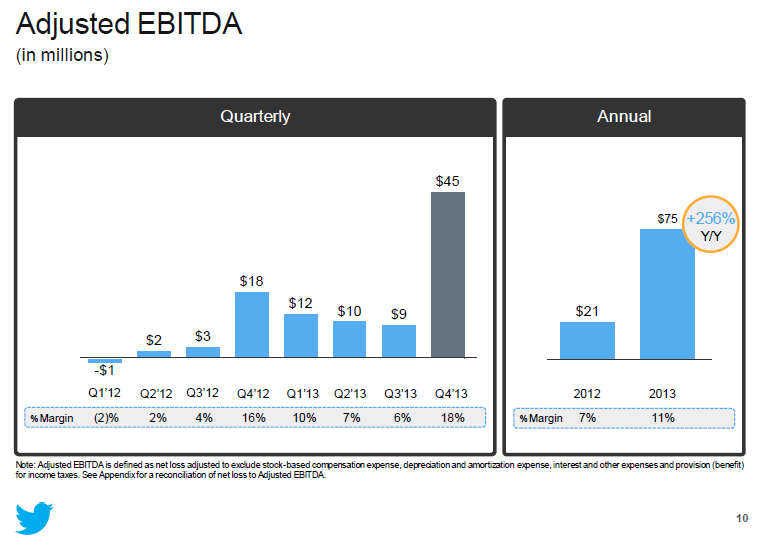 ...and the ad revenue / 1000 timeline views growth was strong 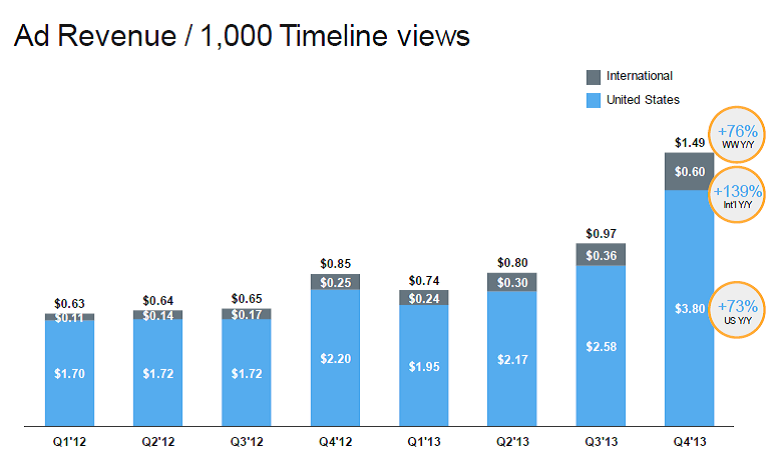 Given the high multiples, Twitter remains a social media concept stock...just like Facebook was a few years back (and some would argue - I guess - still is).  For all the angst over the timeline trend, the advertising revenue / timeline view ratio was sharply better.  Similarly whilst the company is loss-making, ebitda is rising.  That is always how it is with concept stocks: you have believers and non-believers.

Let's go back to that monthly average user chart.  I do think that basic ratio analysis is interesting.  Admittedly Facebook is far more advanced in their profitability push but look back a few years ago, similar concerns were apparent.

Twitter investors have to be schooled for volatility.  Back at the time of the IPO in November I posted about why I bought Twitter shares on the first day of their listing for my pension fund.  In this piece I wrote that:

'That's why Twitter is a perfect investment for my personal pension fund.  I can see the corporate journey they are on and - simply put - I like it and believe in it.  Twitter is progressively going to be a much bigger part of any users life over the next few years.  Advertisers will move in further to tap this and Twitter's revenues, cash flow and ultimately profits will bloom.  I can also see, as described above, that it will be volatile'.

Facebook shares halved from their IPO price then tripled.  Twitter shares doubled but still - even with the post-hours fall - is still ahead of the end of day one price.

I initially bought for my pension fund near US$45 and then doubled up at US$40.  My intention back then was to add at each US$5 lower.  That still remains the case.  I still see the potential.