Randgold Resources full year results today show why I have previously described it as the leading large cap gold company.  Earnings, as shown below, were down due to the lower gold price but the achievement the market liked today was the continued compression of the cash costs aligned with the on-going production increases.  At a time when gold companies around the world are struggling to not only increase production but to do so whilst maintaining cost discipline, Randgold continues to differentiate itself.  Group cash costs of US$628 an ounce of gold for the quarter just finished and US$715 an ounce for 2013 in full is a considerable achievement and offers margin support with gold trading north of US$1200 an ounce. 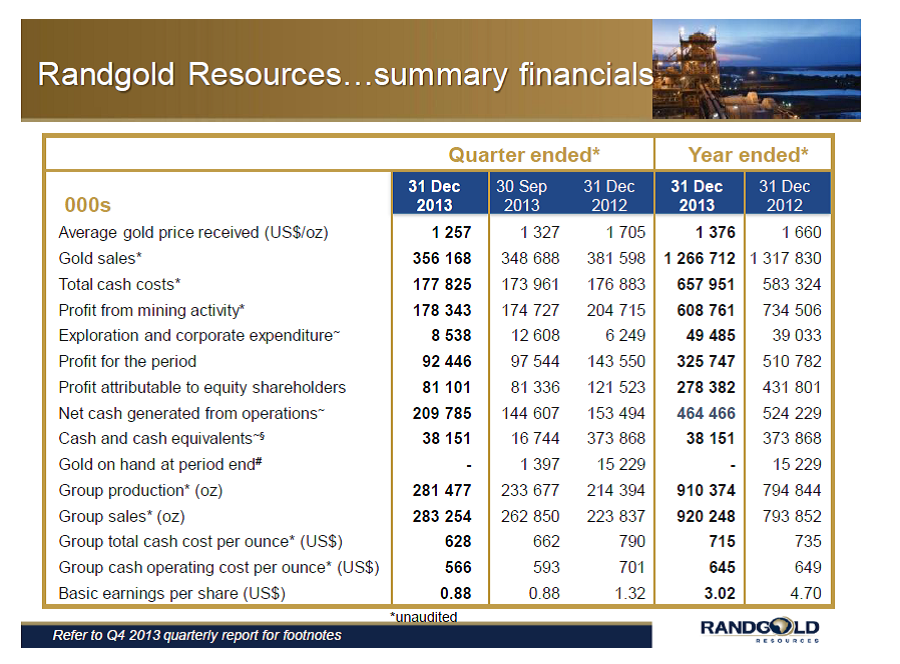 To me though, the real excitement of the Randgold story is not what has gone - considerable though the achievements in building the group's mining profile has been - but the company's retained development scope.  It is possibly 'easy' to get low operating costs one year but to continue to achieve this requires the additional mixer of grade i.e. the amount of gold in a tonne of earth.  The below chart was the most important one in the presentation pack as it shows the company continuing to hit a grade level of at least 3g/tonne for the next four years.  At a time when many of Randgold's sector peers are scrabbling around at 1g+/tonne, the reason for the company's continuing control of total cash costs becomes clear.  That production continues to glide up too is a bonus. 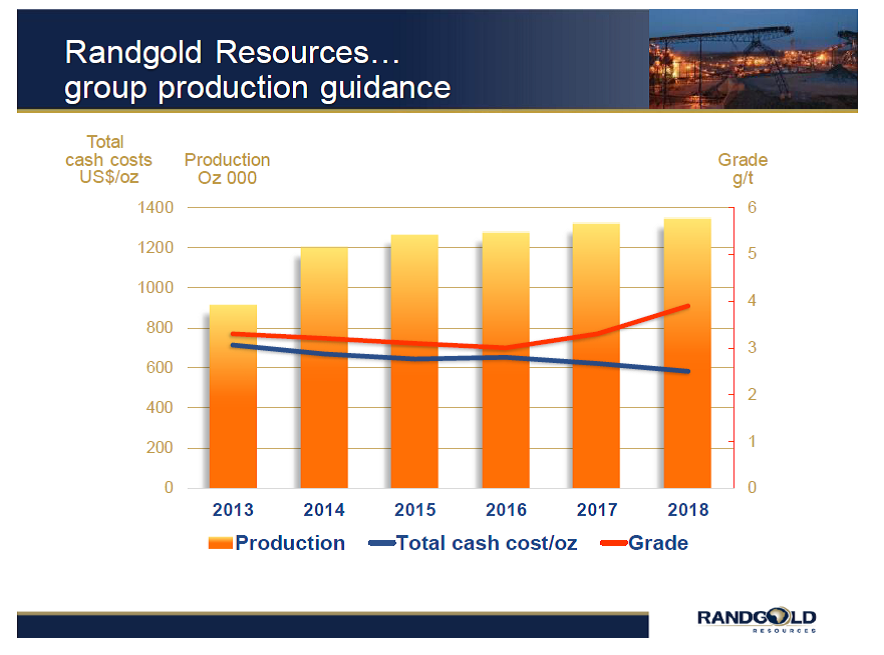 The star operation remains the Loulo-Gounkoto mine in Mali as shown by the juxtaposition of rising grade and falling cost.  ﻿ 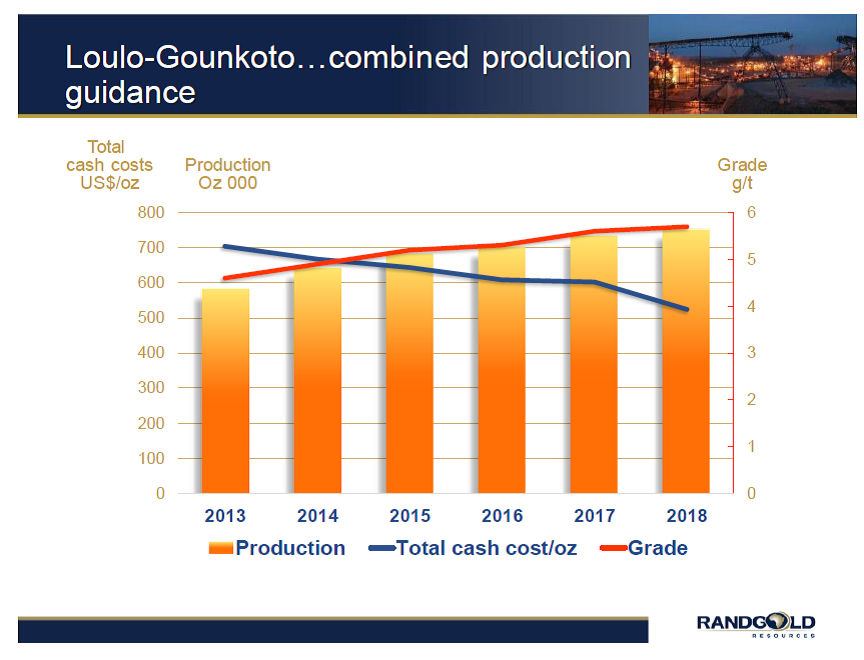 Much of the production growth at Randgold this year is coming from the Kibali mine in the DRC which they solely operate but own in a joint venture with Anglo Gold.  Note the rise in cost here as the mine continues to get built out.  Nevertheless this is an important mine for the group.  Not only is it inherently highly profitable but it shows that the company has the skills and scope to take on interesting new projects outside of their core West Africa heartland. 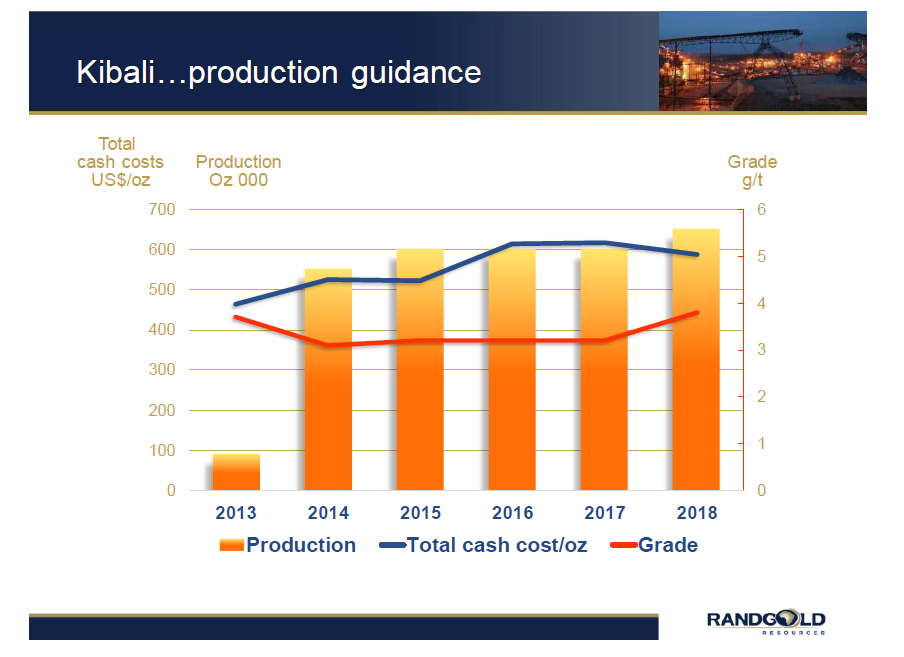 I was not surprised to see the shares gain around 6% in the London market today.  £50 is clearly an interim target point for the shares but I am hopeful they should trade much higher given the positive uniqueness of grade, cash cost control and production growth - let alone prospects for the gold price per se.  Additionally - as shown by their 'resource triangle' the company remains busy at all their major mining sites looking for new discoveries.

Issues?  Apart from the inevitable unknowns around political risk (I note that the company continues to have the most successful political/social interaction policies in the sector), I note that the dividend was left unchanged and even a scrip dividend was offered.  Randgold is not a yield stock (<1% dividend yield) but with (small) net cash on the balance sheet and the positive fundamentals above, I thought a small hike could have been financed.

Overall though this is a minor issue.  I remain long with a target of £50+.
Posted by Chris Bailey at 23:17

Email ThisBlogThis!Share to TwitterShare to FacebookShare to Pinterest
Labels: gold