Goldman Sachs CEO and I are in full agreement on something: China

China remains one of the most interesting markets for global investors.  Not only does the Shanghai Composite remain above the 'law-of-round-numbers' 2000 index point level...

...but the country attracted two of the more interest quotes this morning.  This CNBC report noted a quote from one of their guests:

'"With an estimated 2014 P/E (price-to-earnings ratio) of 8.1, China is cheaper than Turkey, whose economy is in a tailspin. With China's industrial profits growing at a robust 12.2 percent year-on-year, this makes no sense to us," David Goldman, managing director at global financial services group Reorient, said in a note'

Of course tempering the low valuation and high growth story are the transitional challenges the country is facing from the corruption crackdown to reducing the size of the shadow banking system and shifting the economy from investment/export centred to something more balanced (and consumption-centric).

Back in late December I initiated a position in Chow Tai Fook (most recent write-up here) which is listed in Hong Kong but predominately has its jewellery shop exposure in mainland China particularly in cities outside the 'tier 1' grouping i.e. in smaller cities which have the real growth potential in the country 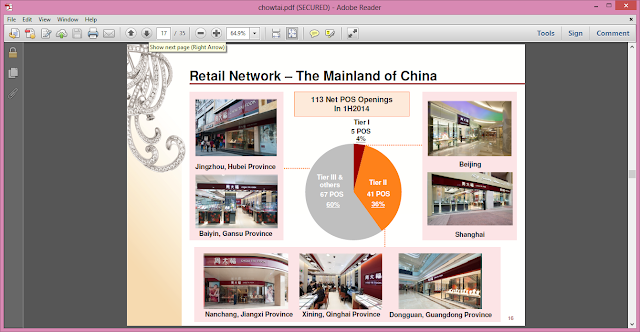 The company released their critical Chinese New Year trading statistics a couple of days ago...and pretty impressive they were too.

Chow Tai Fook shares are re-approaching that historic resistance at the HK$13 level which still would represent a good turn from the near HK$11 level I bought the shares at around Christmas time.

The bigger observation is that there are stock opportunities to enact even with the much-discussed 'difficult backdrop' China (and the broader emerging markets) has.  As the great investor George Soros famously said:

"Markets are constantly in a state of uncertainty and flux, profits are made by discounting the obvious and betting on the unexpected"

For once Goldman Sachs and I are in complete agreement.