And the manufacturing PMI numbers said? A global review...

One aspect of having a few hours away from writing about the markets is that it can give perspective.  Today (Monday) was a huge day for the manufacturing PMI statistics around the world.  How can they be summarised?

Let's start in Asia.  All the talk was about China but outside the Middle Kingdom, all the other countries shown below actually had improving month-on-month PMI statistics.  Clearly ex-Japan they remain, in absolute terms, lacklustre but inherently it is not so differentiated with the last couple of years (with the exception of India clearly worse and the aforementioned Japan clearly better). 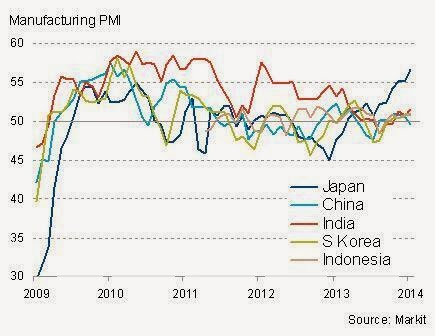 Ultimately Asian manufacturers are materially impacted by what is happening elsewhere in the world. Europe is printing far higher absolute PMI numbers than the average Asian country BUT differentiations are still very apparent.  Whilst it was good to see France ticking up, its absolute decline is still a concern.  Most insightful though to me was the balance of the marginal moves: 4 up, 3 down and one unchanged.  Hardly rampant at the margin.

The issue remains growing deflationary forces as shown below.  Will Mr Draghi do anything about it on Thursday?  Personally I doubt it, but you never know.

More likely I think is that he will continue to talk about the potential for him to 'do anything' whilst continuing to exhort the European governments to fiscally and legislatively (pro supply side) reform.  This chart showing the stalled progress on aggregate government deficits in the EU says it all. Finally, the Americas.  Brazil was a little above the 50 neutral rate but at least expanding.  The US and Canada were respectively at three and nine month lows although both countries remain usefully above the aforementioned 50 neutral level.  A strong enough background for rising Brazilian interest rates (to help quell inflation/shore up the currency) and tapering by the Federal Reserve?  Hmm.

Services PMI numbers out later in the week for the complete economy snapshot - whilst many of the above numbers are interesting, it is important to remember that for large parts of Europe and North America, the services component of the economy is many multiples that of the manufacturing component.