Verizon: Jim Cramer is right, but that's only half the story

To put this into more normal English, the leading light of business TV Jim Cramer, after having a quick scan through the quarterly report of the US mobile operator Verizon's quarterly numbers, cannot see any impact from the recent rhetoric from sector peer T-Mobile that they would compete aggressively.

Now Verizon made the headlines a few months ago by having successfully bidding Vodafone US$130bn for the part of Verizon Wireless they did not own.  Now this changes the numbers post the anticipated closing of the deal in the next few months.  By definition too, what is going to drive this share up or down over the next year is whether going to a 100% holding will be perceived as a success or not.

So what are the trends on the wireless side?  Average revenue per user continues to go up nicely (+7.1%) and just under half of accounts are on a bundled 'Share Everything' account.  So far, so conventional. 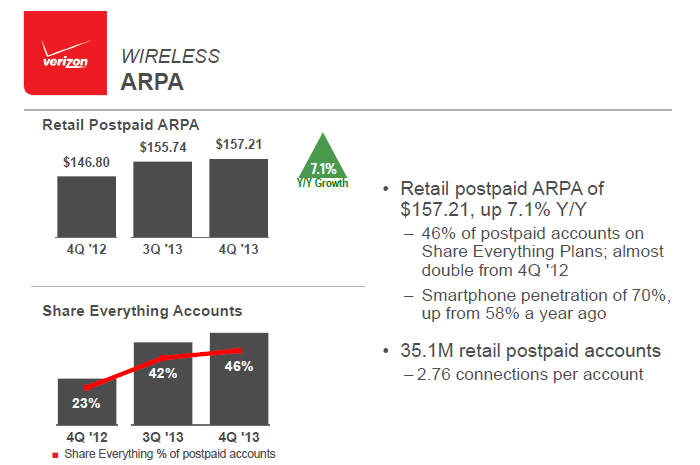 Additionally, not only are 70% of users on smartphones now but 69% of the data requirements are on Verizon's 4G LTE network.  That is industry leading.

Finally, as Jim Cramer notes, retail connections have continued to grind up (4.7%) as the volatile retail net adds number pushed forward.  This was down year-on-year after a very strong Q4 2012 period but clearly holiday season time connections for the company was net net successful, especially as churn remained below 1%. 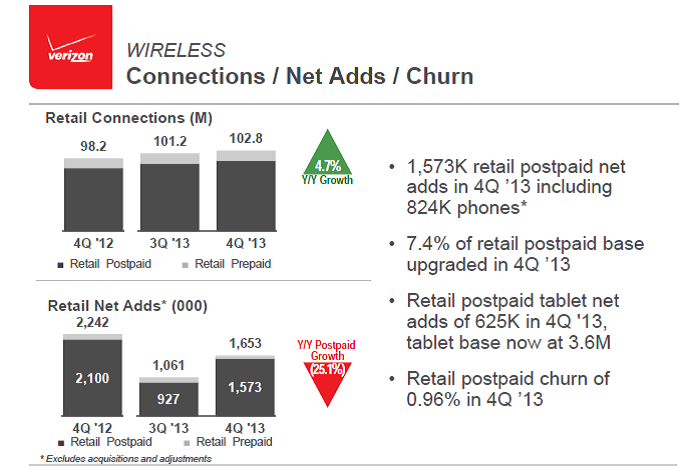 Net result of all of this...is that the share remains in a tight post Vodafone deal range of c. US$46-52.  As I write, the spot price is slightly closer to the bottom of the this range at US$47.50.

And this is where Jim Cramer's point is important.  I too don't see the impact of a potential T-Mobile (or others) price war in these numbers.  In fact, the company looks in rude health.

That's the downside risk (potentially).  The upside hope is that the acquisition splurge is well-timed.  Running a few numbers, the company pro-forma post the deal is trading just under x10 EV/ebit.  Expensive versus European telecoms, but for a company who has just posted its fourth successive quarter of double digit earnings growth, it looks lightly valued.

And that's why Jim Cramer is right.  The quarterly earnings just out show no obvious impact from T-Mobile/new mobile sector competition.  The share price though...well it is starting to factor it in - by going sideways/staying range bound in recent months.  Keep waiting and watching on Verizon would be my conclusion.
Posted by Chris Bailey at 16:13

Email ThisBlogThis!Share to TwitterShare to FacebookShare to Pinterest
Labels: telecoms