United Technologies - you have got to say that was quite impressive

United Technologies - with interests ranging from lifts (Otis), to aircraft engines (Pratt & Whitney) and to a variety of military aerospace is always a bell-weather.

When I last looked at the company in October I concluded it had enjoyed a good run but, north of a US$110 share price, I was struggling to find any value.  Well it has only been the last couple of weeks that the share has pushed above the last quarterly report induced high.  Still, over the last year, the chart makes impressive viewing.

The headlines were very solid from the company but this chart captured the progression well.  I particularly liked the sequential improvement in each quarter's organic sales.  2013 was a very solid year for the company. 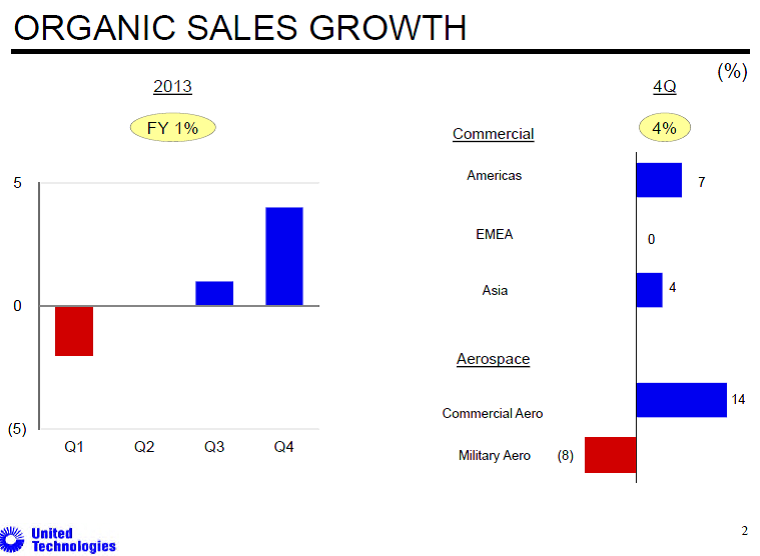 But what about 2014.  Using the EPS range mid-point, anticipated EPS growth of 7.9% (versus 16% in FY13) is solid.  Margin implications remain positive with sales only expected to increase 2%.  Free cash flow conversion remains solid.

What was striking about this divisional split graphic is that all four major divisions are showing an increase (although Sikorsky - due to military funding challenges and issues - will see margins fall).  That is more uniformly optimistic than write-ups by other conglomerate industrial peers like GE for example. 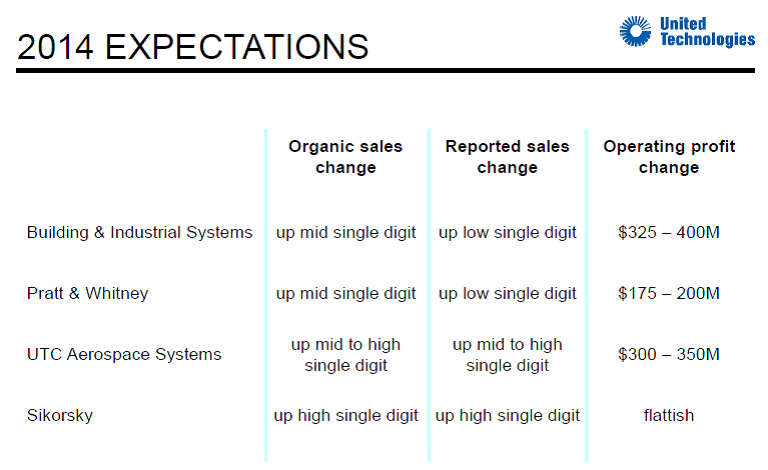 2014 could be United Technologies first year of US$10bn+ operating profit...and a x12 EV/ebit FY14e rating does not seem very expensive.  Is it cheap?  Not really - and key metric growth is slowing.  Nevertheless with net debt:ebitda less than x1.5 the company has options including augmenting the buyback/dividend which in 2013 was equivalent to over 3% of market cap.