The last time I wrote about Taiwan Semiconductor Manufacturing Company (TSMC) I discussed double digit revenue growth in December and (incorrect) rumours about the health of the company's Chairman.  Today though saw a more conventional piece of newsflow to write-up: the Q4/FY earnings numbers disclosure.

Fortunately the Q4 numbers were somewhat more conventional although revenues and margins were more towards the bottom of the guidance range, they were at least in the range.  The company had already guided that Q4 would be negatively impacted by semiconductor supply chain's inventory management. 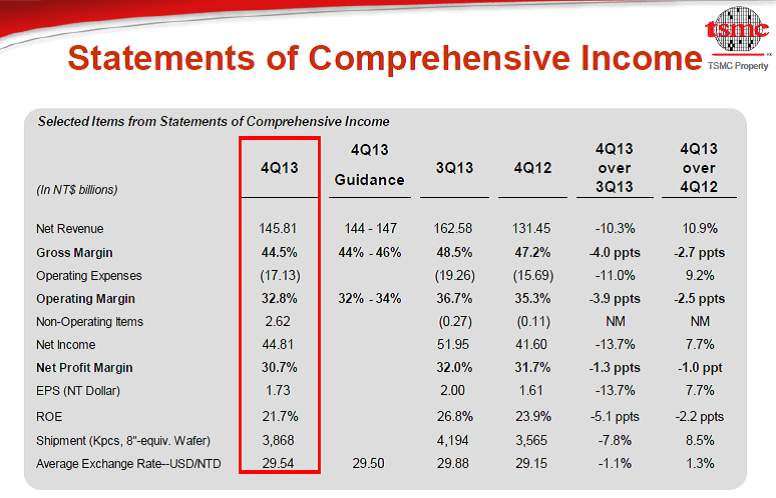 From an application perspective communication (aka smartphones etc) is a small majority of revenues.  Q4 had already been guided as weak - over full year 2013 all areas apart from those to computer applications showed revenue growth.  Consumer led the way thanks gaming consoles. 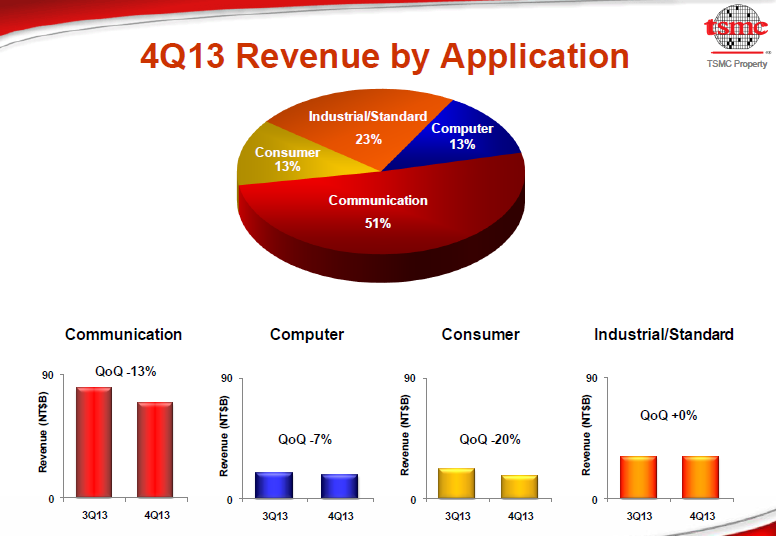 From a technology perspective, TSMC confirmed that 'on a full year basis, 28-nanometer tripled and had contributed about 30% of our total wafer revenue, a big increase from the 12% in 2012'.  I expect this technological shift to continue, providing an enhanced barrier-to-entry.  More of this in the outlook review.


Cash flows were positive even despite a minor ramp in capex.  At nearly NT29bn this level, if annualised, would be equivalent to a 4.2% free cash flow yield. ﻿ Solidly impressive given the aforementioned capex ramp.  Just under 9% equivalent of the company's market cap is held as a net cash balance.  That is a very solid financial position and shows the scope for a special dividend to supplement the current regular 2.8% dividend yield. 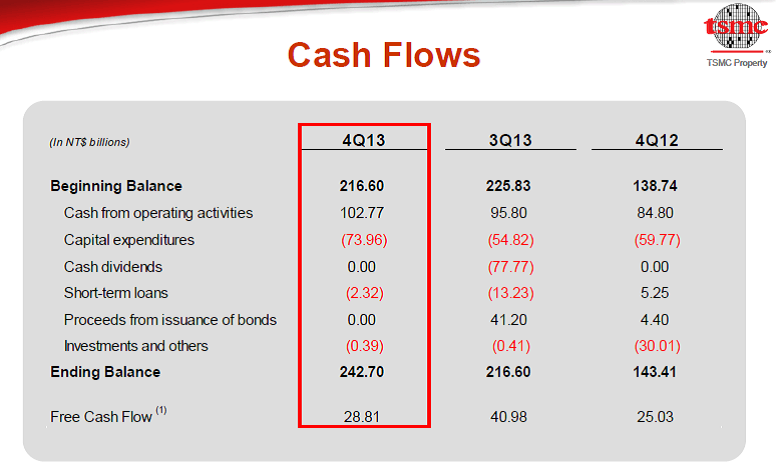 Guidance for Q1 14 implies versus Q4 13 a small uptick in operating and gross profit margins and a 5% fall in sequential revenues.

China outlook/opportunity is mobile-centric: 'We intend to be a significant factor in the China market. We intend to be a significant factor in the medium to low-end, middle to low-end kind of smartphones...TSMC revenue from mobile products are expected to grow more than 35%'.
Capex focus, competitiveness and barriers-to-entry: 'About 95% of the capital expenditure is for advanced technologies, and we mean 20-nanometers, 16-nanometers, more 28-nanometer...
2015 outlook: 'And just looking a little further ahead, further than this year, we expect to continue benefiting from the growth of mobile products in 2015 and expect to see emerging devices, such as wearables and others, to join the line for the mobile products'.
﻿