From a retailers perspective, the Christmas period has generally not been the greatest.  Last week we had some mixed-at-best numbers in the UK and the US and today it is the turn of Germany via their largest listed retailer Metro.

Metro is an unusual company.  Its largest business is in cash and carry but it also retains significant exposure to supermarkets, electronics retail and department stores.  A retail conglomerate, you could say.

And a global company too.  Metro runs over 2,200 outlets in 32 countries but gets just over two thirds of sales from Germany and other western European countries.  This makes it an interesting barometer of Europe's largest economy.

Today's trading statement just covered sales (a fuller set of numbers including the profits line with be available next month) but even with a limited release what is striking is the continued negative like-for-like progression in local currency sales.

Declining sales are not necessarily a disaster: they simply can reflect less profitable parts of the business being wound down.  What is noteworthy though is the contrast between the core Cash & Carry business in many geographies, across different continents...

...and the decline in their core German supermarkets brand Real due to 'competitive market conditions' helping to lead to 'reductions in food prices'.  An austere Christmas German indeed.  In various media interviews, the CEO of the business has described the period as 'soft'.

Metro shares have had a strong last nine months boosted by hopes of a turnaround and rumours that the company's sprawling structure might be evolved or even broken-up.  As the three year chart shows below though, Eurozone retail challenges have not escaped them.

As noted above, a fuller disclosure will be available next month including the all-important profit lines, but beyond Metro, the read-across for the German economy is interesting.  The headlines are full of German economic success but the reality is that the economy is split...and the average consumer (as in most of the Western world) is struggling.

Germany has become ever more reliant on export success to keep the growth juggernaut going.  This not only is distorting the global economy (see below) but it is constraining and hampering European policy-making, as discussed last week.

I am sure retailers like Metro would agree that change is beneficial. 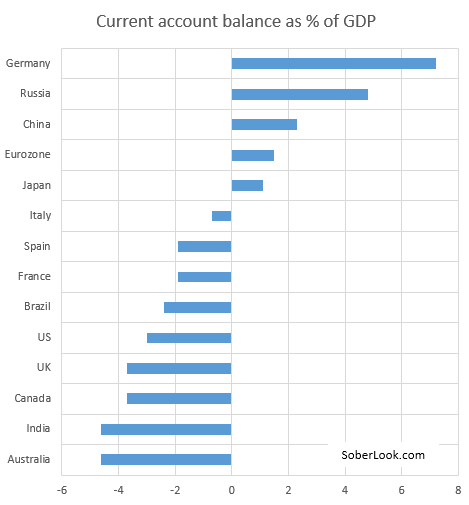 Email ThisBlogThis!Share to TwitterShare to FacebookShare to Pinterest
Labels: Europe