Philips and restructuring whilst Siemens reminds me of Caterpillar

Two heavyweight European industrial companies reported their quarterly update today.  What were the key insights from Philips and Siemens?

The key comment from Philips was that the company said it expected 2014 to be only a "modest" step forward toward its 2016 targets, taking into account its on-going restructuring and investment in higher-growth businesses.

Philips is a great thematic company accessing - as shown below - urbanisation, demographic and healthcare mega trends, but that does not mean it is immune from challenges and issues, specifically as their consumer division remains under competitive pressure from Asian peers.  Hence the need for on-going restructuring spend and a shift to higher-growth business areas.  To their credit they have largely achieved this over the past few years. 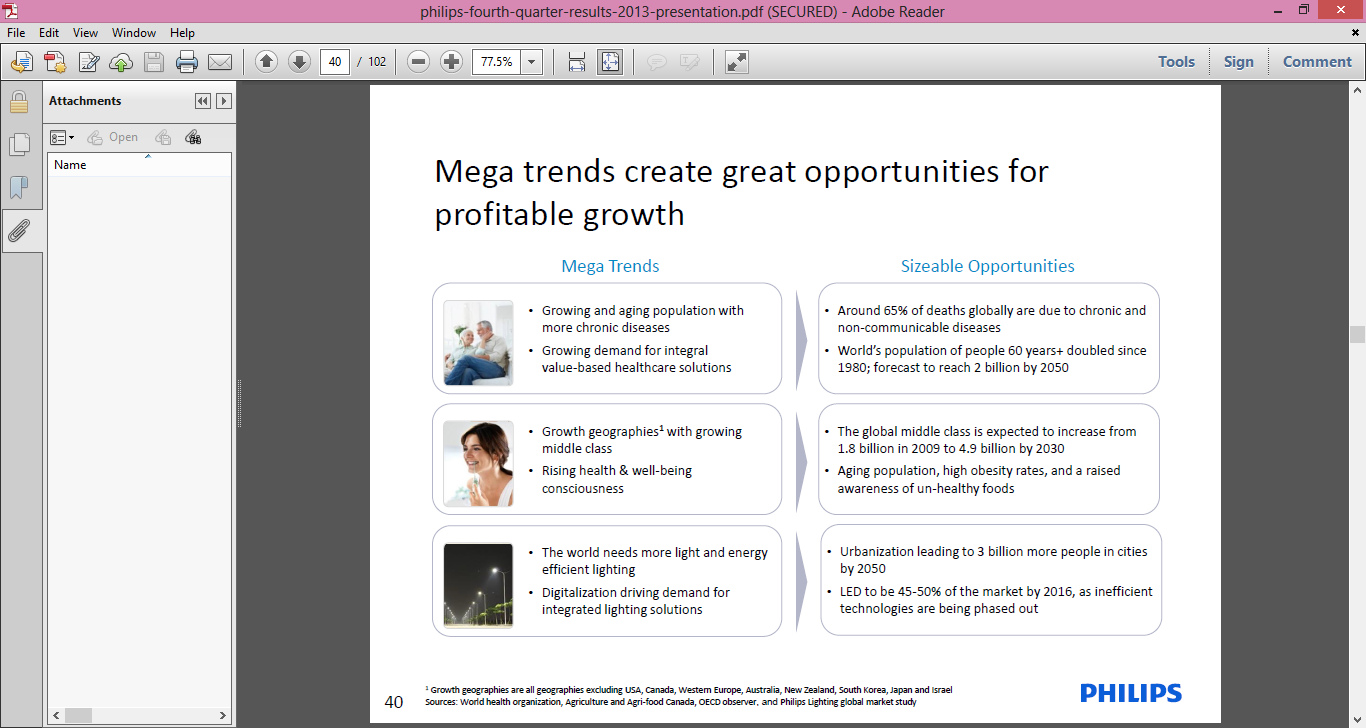 I think their prospective challenge though is centred on Europe, which is a good part of their sales.  Whilst the Q4 data was a little better, the full year 2013 data showed dullness in Western Europe (and negative momentum for the company in North America where they rationalised their product range but probably should pick up more economic tailwinds in 2014). 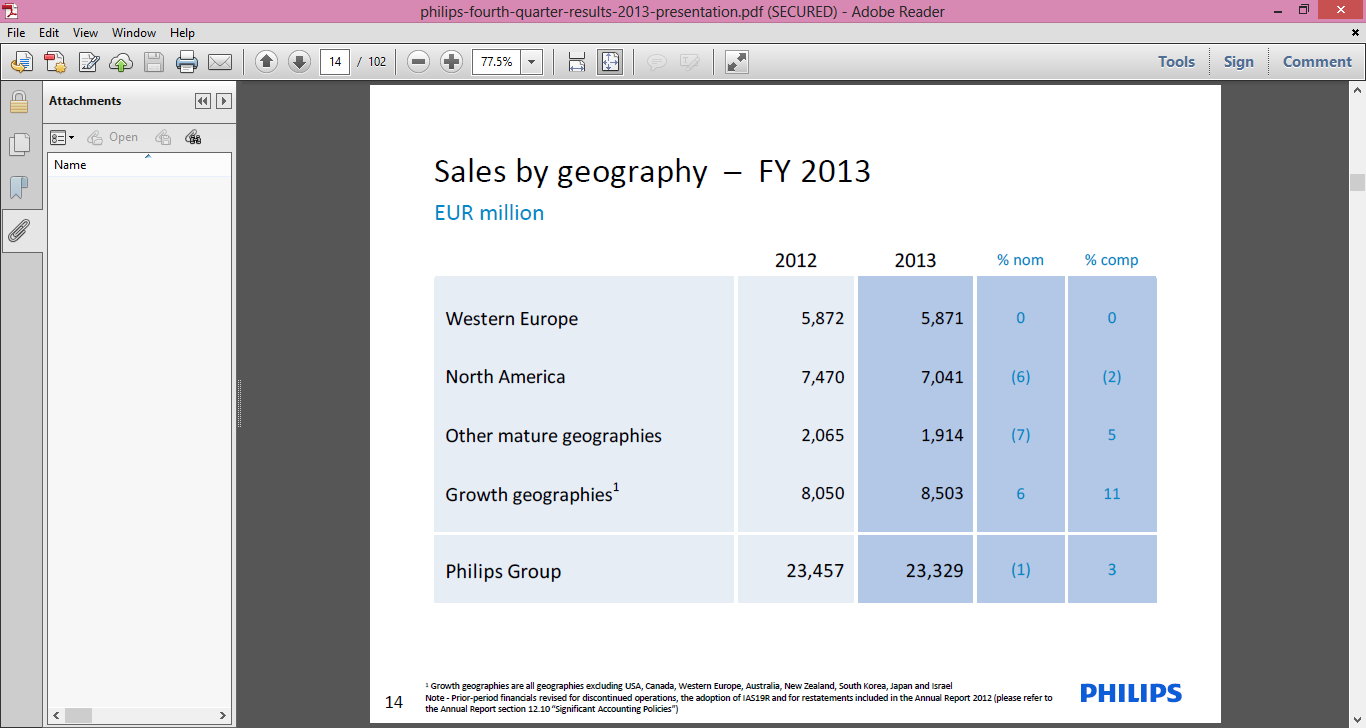 And one reason for this European dullness?  Look at the order trends in their largest division healthcare.  No prizes for guessing the lagging geography...  Likelihood of the European healthcare industry going on a spending boost?  Relatively low given the backdrop of austerity. 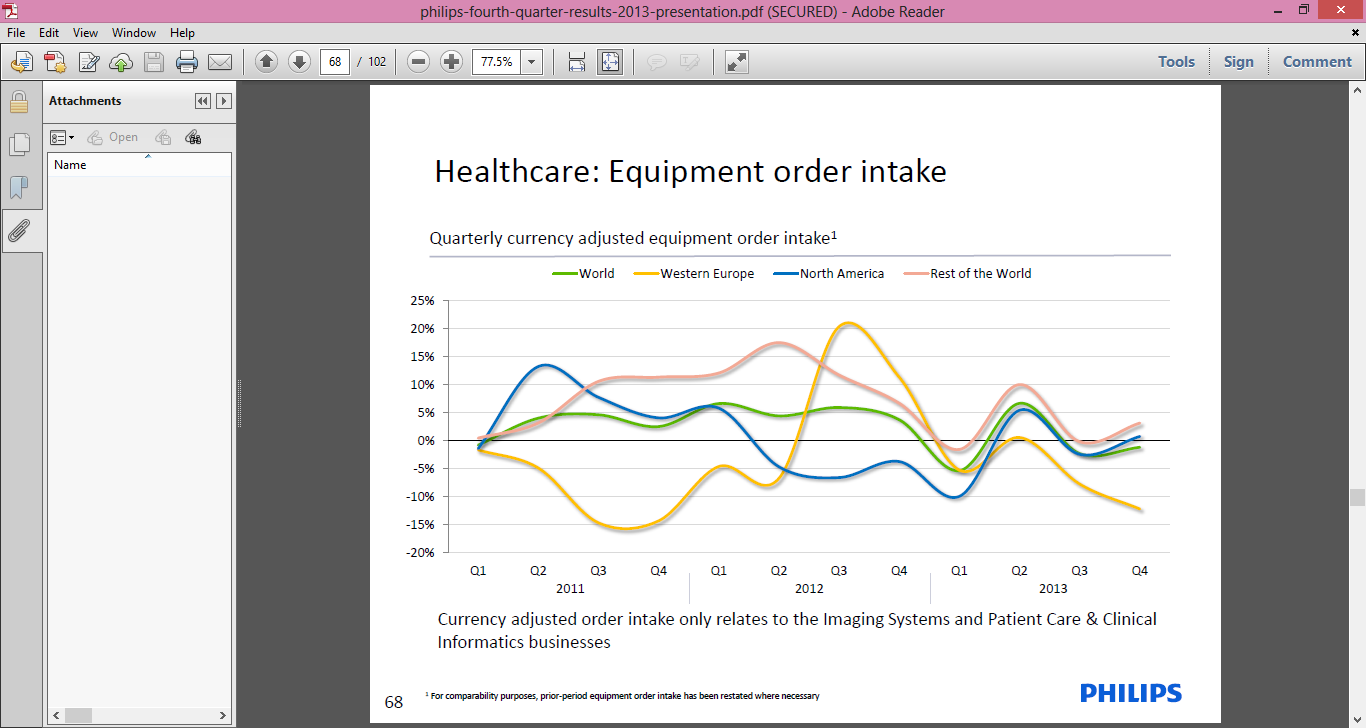 Philips has little debt, a x10 EV/ebit rating and a 2.8% dividend yield.  These are not bad metrics at all. I note too that technically the share is back to that c. Euro26 share price level it pushed up to at the time of the last corporate update.  This is a big level.  It is not a compelling entry point though given the above.  That is probably Euro24 and then Euro22 ceteris paribus.

And how about Siemens?  Many of the key metrics are not too dis-similar to Philips: little debt, a 3% yield and a prospective EV/ebit rating of around x10.

One difference though would be the rhetoric around the numbers just reported and the business outlook for the rest of the year.   Whilst headline revenues were negative, order growth was far better. 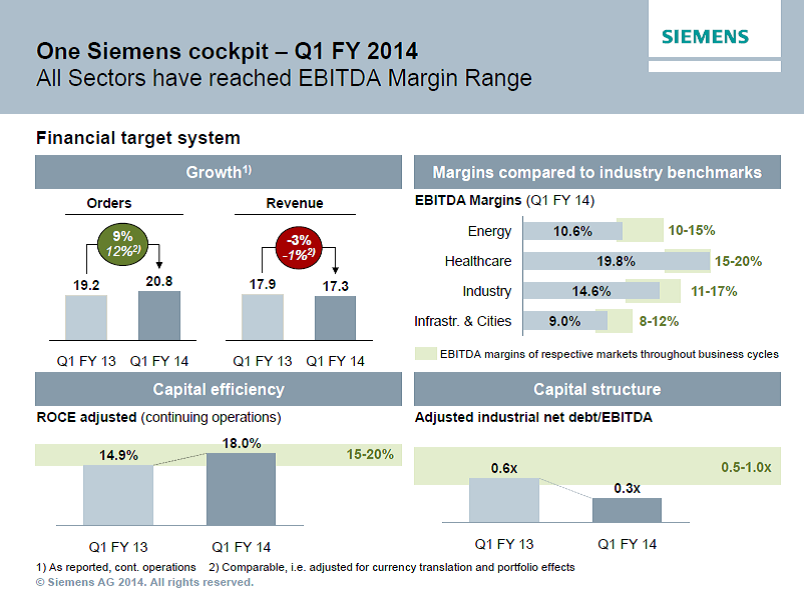 Looking at the chart below, this is how they see 2014 playing out.  Yes 'challenging' markets and their shorter cycle businesses are 'not anticipating a recovery' until much nearer the end of the year, but look at the earnings leverage hopes (admittedly only back to the EPS seen in 2011).  As the above chart noted, the company still sees scope to improve margins across industry peers 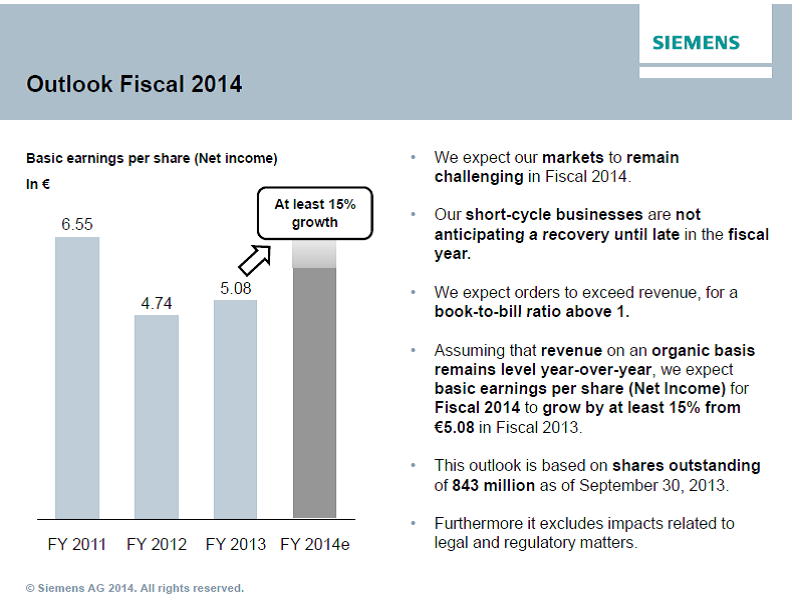 And so what is priced in?  Well here is the Siemens 5 year chart.  Note how the share price is back up to that c. Euro100 level where it last reached in...2011.  Interesting.

Note too what else happened in 2011.  As hope faded about the sustainability of the Eurozone recovery, the share sold off sharply.  Of course, this may or may not happen again.  My observation would be that a lot is hoped for.  Such a conclusion reminds me of my thoughts re Caterpillar yesterday (see this link).

Round numbers can provide opportunities.  Siemens at Euro100?  Round number sell/short...