So Lenovo have done it again.  Yesterday it was announced that they had - as rumoured - a US$2.3bn bid for IBM's smaller server business accepted.  They will be hoping that it turns out as well as the purchase of IBM's PC business did over the last eight years or so:

This Bloomberg piece has lots of good information contained within it. Contrast these statements.  Here is how Lenovo see the deal:

'For the past 20 years, PCs were our core business...This deal will meet our strategy and give us a good foundation for the enterprise business. We hope we quickly can build it into $10 billion in annual sales, from $4.6 billion now'

And here is the IBM view:

(nb the money raised was equivalent to 1% of IBM's EV - for them an almost irrelevance.  I still cannot get excited about IBM as per my results write-up earlier this week here).

My view would be that ultimately Lenovo got the better deal here.  They purchased the unit at x0.5 sales and used their cash balance in a way potentially more useful for their business than buying a stake in Blackberry as was previously mooted by the press.  Additionally - and most importantly - significant overlaps clearly exist between their PC and server business.  Lenovo previously had a fledgling 1% global market share.  They are now global number three as per below.  If I was HP or Dell I would be very concerned, judging how global PC market shares have shifted. 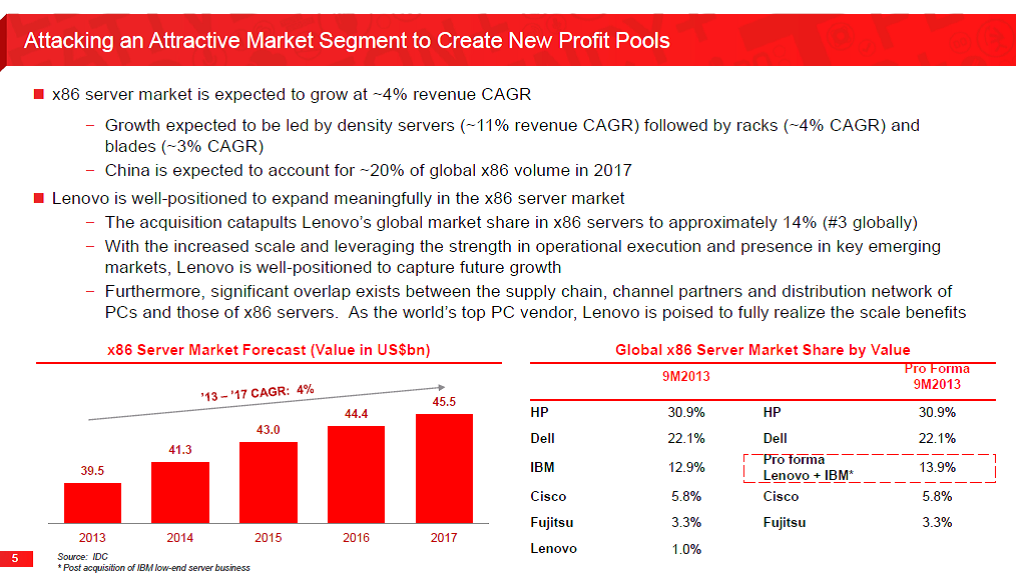 I don't hold Lenovo shares today.  I used to but I bailed out when they hit my target in the HK$9s during the last few weeks of 2013.

Here's my observation from today's trading, admittedly on a day when the Hong Kong bourse ended down more than 1% due to global volatility in Europe/America on Thursday.  The shares did spike on the news but lost nearly all this bump up (as shown in the last 5 days trading chart below). Quite possibly this was due to market volatility and/or fears that regulators may have some issues with the deal.

For me - at least until I see some more formal quarterly numbers - I will remain on the sidelines.  There is not long to wait until the next set of numbers came out on the 30th January.  ﻿
Posted by Chris Bailey at 08:27