Just when you thought it was safe to get back in the water...  As long-term watchers will attest the Japanese economy and stock market is full of surprises.

Yesterday saw the big Suntory purchase of the US spirits brand Beam in the US.  Some commentators talked about this deal representing greater deal-making confidence in Japan.  Personally I see it as a sector specific deal...and I believe that Suntory overpaid.

Less confidence has been shown in future Japanese prospects by more generalised holders of Japanese equities.  After being closed for a public holiday yesterday, the Nikkei had a poor day on Tuesday, falling by over 3% bringing the stock market to close to a thousand index points off its late 2013 high.

For one of 2013's most impressive performing stock markets, 2014 has not got off to a good start.

And why is this?  I still believe the most important insight into the Japanese economy came from a study I quoted near the end of the year:

'as per a Kyodo survey, only 17% of major Japanese companies will authorise wage hikes in FY14/15'

That is not good news.  The central point of Japanese Prime Minister Abe's reforms is an aim to try to quell the disinflationary forces which have blighted the Japanese economy for more than a generation now. For Abenomics to work it needs Japanese companies to help maintain consumer purchasing power by raising wages.  This is the bottom-up reality which is just dawning on investors.

This is met by some top-down issues too in a classic pincer movement.  Even if we put to one side the large budget deficits and national debt burdens the country has, much of the recent rise in the Nikkei index has been correlated with the fall in the Yen.

A falling currency and a rising stock market can make sense especially if exporting makes up an important component of GDP as it does in Japan.  Here's the problem though.  The Yen has - at least temporarily - stopped going down...

...but as Zero Hedge noted, this has not stopped the country posting its 'worst balance of payments current account deficit on record'

'At JPY -592bn vs expectations of JPY -36bbn and its 5th miss in the last 7 months as economists and analysts and pretend portfolio managers just keep getting it wrong. The trade deficit plunged once again, missed expectations once again and printed at the 3rd worst deficit ever with the 16th monthly trade deficit in a row'. 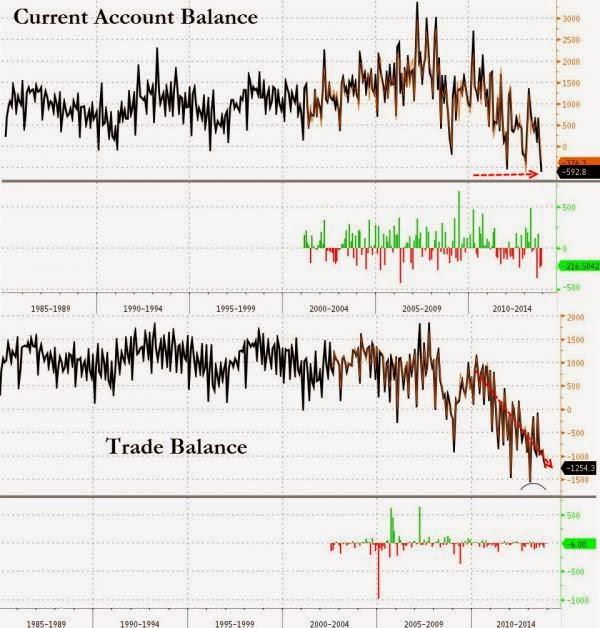 So buffeted between companies who are reluctant to raise domestic wages (but maybe happier to buy big overseas), big structural deficits, a stock market acting like a geared play on the exchange rate and a deteriorating trade position, it is little surprise Japanese investments are volatile so far this year. There will be opportunities but much more at the stock level.  Investors hoping for an easy 'buy and hold' repeat of 2013 will be disappointed.

Email ThisBlogThis!Share to TwitterShare to FacebookShare to Pinterest
Labels: japan