Interest rates and a crisis: Turkey, Norman Lamont and walking the tightrope

Those of you with long memories will recall the events of 1992 and some of the events around the UK exiting the ERM, the European Exchange Rate Mechanism, which was a precursor for evolving floating exchange rates across Europe to ultimately allow the creation of the Euro.  As George Soros and friends aggressively shorted the British Pound in anticipation of the UK exiting the ERM, the then UK Chancellor Norman Lamont - in a valiant last minute attempt to shore up the currency's value - raised interest rates in two steps by 5% points.  In a UK economy back then which had suffered nearly three years of falling house prices and the introduction of the term negative equity, this was an extreme policy...and one which failed.  The UK left the ERM and interest rates dropped back.

I was reminded of this policy when I heard about the Turkish Central Bank action late yesterday (Turkish time) where:

These moves have had a short-term impact.  Not too many analysts were looking at the US Dollar - Turkish Lira cross until the last week but, at least for the time being, it is being followed closely.

As David Scutt on Twitter (@david_scutt) noted though, the pain relief is not total

Looking at the chart below, only at a return to the 2.0 level could we even remotely suggest that this crisis is over.

And in the interim the Turkish authorities are playing a high wire tightrope game.  The unsustainability of such high interest rates in the UK economy in 1992 undermined the credibility of maintaining the ERM membership.  What impact, over time, on Turkish economic growth rates and hence ultimate pressure on the broader economy?
Of course Turkey has many longer-term structural advantages, acknowledged by its status in the MINT group, the newish Goldman Sachs successor to the BRICs.  Additionally - and generally - foreign direct investment flows to the emerging markets structurally remain positive and good as per below. 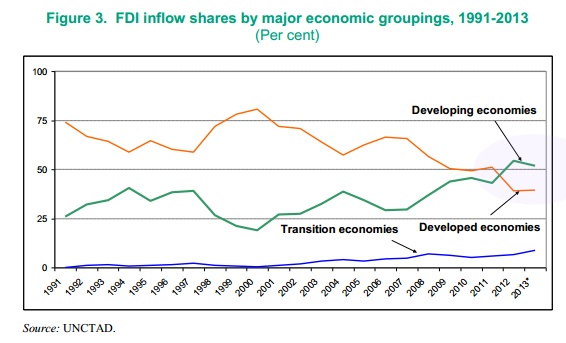 But here's the issue.  As we await the outcome of the final Federal Reserve meeting chaired by Ben Bernanke, analysts are scrabbling to understand the impact of the start of tapering in the US on global money flows and hence emerging market positioning.  So far, this has manifested itself in volatility in emerging market assets.  Over time better run economies will decouple from this.  Hiking interest rates - a policy also seen in Brazil and India is fine as countries battle issues such as weak exchange rates or inflation - but exchange rate stability will only come if policy credibility is maintained.  And that is a big ask at the moment.

My view remains that emerging markets are structurally cheap but accessing sub-themes such as the growth of the consumer is the better way to gain exposure and not buying iShares xyz.

Interesting too to see a malaise in interest.  Here are the results of a (US) Yahoo Finance poll issued yesterday.  Lack of interest is the underlying theme.  That's the advantage of staying interested in times of volatility and uncertainty. 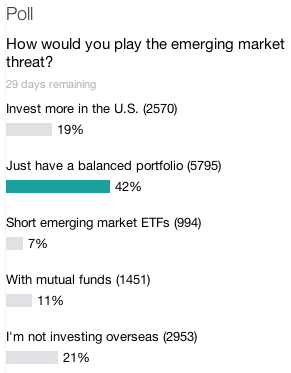 Staying greedy whilst others are fearful remains a key investment trait to have.   A few thoughts on specific names to follow.
Posted by Chris Bailey at 06:54