It used to be said that you can't go wrong by buying IBM.  Well, the last year has not been so great: that's the trouble with racking up seven successive quarterly revenue declines.  That is not cyclical, that's structural.

Here's the most striking aspect of IBM's numbers, over FY13 if you strip away the accretive aspect of the ongoing share repurchases, EPS growth falls to 1.9%.  And then there's the tax rate compression of just 11%.  I saw one analysis which suggested a shift back to an analyst anticipated norm of 23% impacts EPS by about 80c...or getting on for 80% of the margin expensive impact. 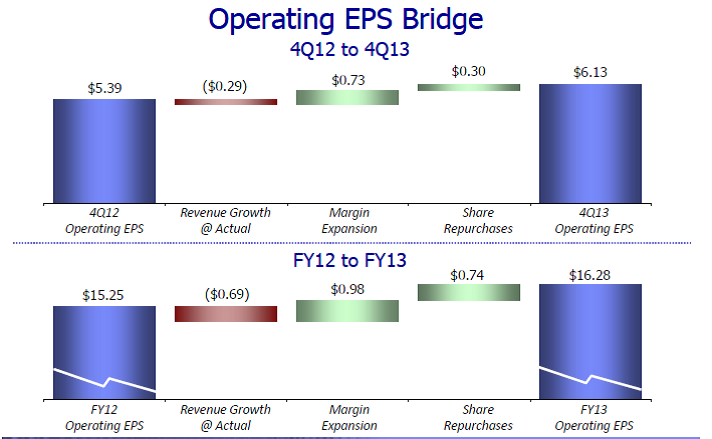 So IBM is financial engineering par excellence?  Well, it is trying to reward shareholders worried by the revenue decline.  The FY13 free cash flow yield of 7.4% is more than paid out.  I give them due credit here, they are trying (other technology behemoths, please take note).

The problem though is the grinding revenue declines.  This is way worse than Cisco hiding behind some negative comments about the emerging markets...'major', 'growth' or 'BRIC' market, it is the same directional revenue trend in reported (middle column) or constant currency (right hand column). 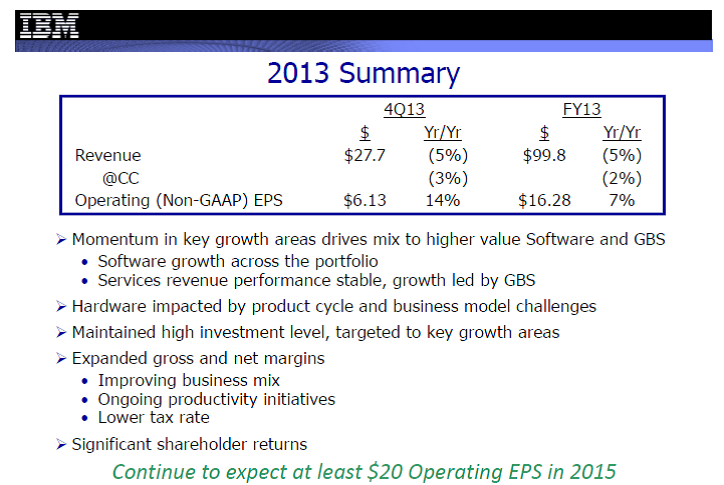 The company needs shaking up and perhaps the mooted Lenovo server deal is or the best given the comments about hardware above.  As the article linked says, unfortunately these numbers from IBM can only strengthen Lenovo's negotiating hand.

Using the FY13 numbers, the company trades on a x11.5 EV/ebit along with the aforementioned 7%+ free cash flow yield.  Given all the above...that does sound like value to me even with that US$20 2015 EPS target.

A single digit EV/ebit level is back to the mid US$160s share level - or the lowest point since mid-2011 for the shares.  Unless Lenovo overpay or the company gets even more aggressive on returning capital, I struggle to get excited...even if Warren Buffett is on the shareholder list.