Google impressed the market after the close yesterday.  The headline numbers did not immediately impress investors - after a strong recent run - but news that the long-awaited stock split / 'C share' will occur in April helped push the shares up over 3% in the after market.

I have covered the growth of Google's ubiquity many times before.  What did yesterday's numbers add to the debate though?

Statistically - for an insight into Google's progress - the key statistics to look for are the paid click and cost-per-click spread.  For Q4 year-on-year paid clicks rose 31% and cost-per-click fell 11%.  That's a 20% spread.  Impressive and so much for the fears of a year ago about declining mobile advertising pricing hurting the model.

How about the quarter-on-quarter progression.  The respective metrics were +13% and -2%.  The spread of 11% is fine, but just fine only.

The key chart from the presentation was the continued compression/control of traffic acquisition costs.  That's a tick in the box. 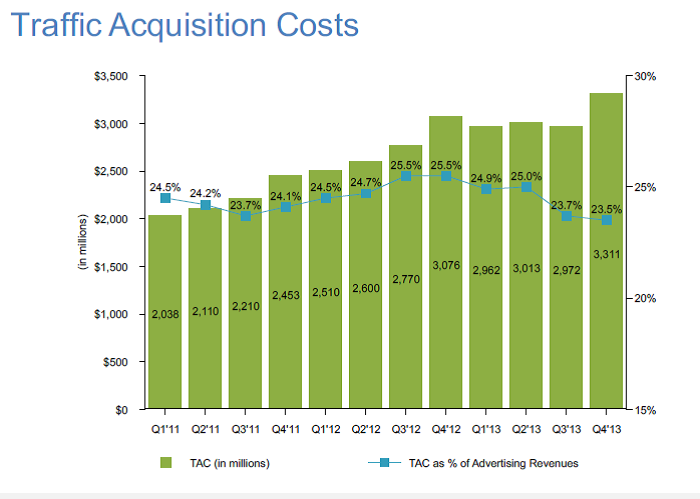 The monetisation of the advertising model is working well.  As the company put it on the conference call:

'The volume of compression running through our private exchanges as on average doubled every quarter over the past year. Overall, our monetization solutions like our Ad Exchange, AdSense and AdMob are helping major publishers maximize their revenues from digital advertisers. So that's our core ad business'