Earlier in January I dubbed the US pharmaceutical and related behemoth Eli Lilly as the company where 'it is so dull, it is good' (see link here).  Given that comment and report was written when the company unveiled the key points of their 2014 corporate performance hopes, there were not too many surprises in the Q4/FY numbers released earlier today.

Probably the most interesting new chart was this one showing the poor volume growth in the US due to patent expiries.  This meant that price uplifts in Q4 did not quite offset volume declines, as has been the case for the rest of 2013. 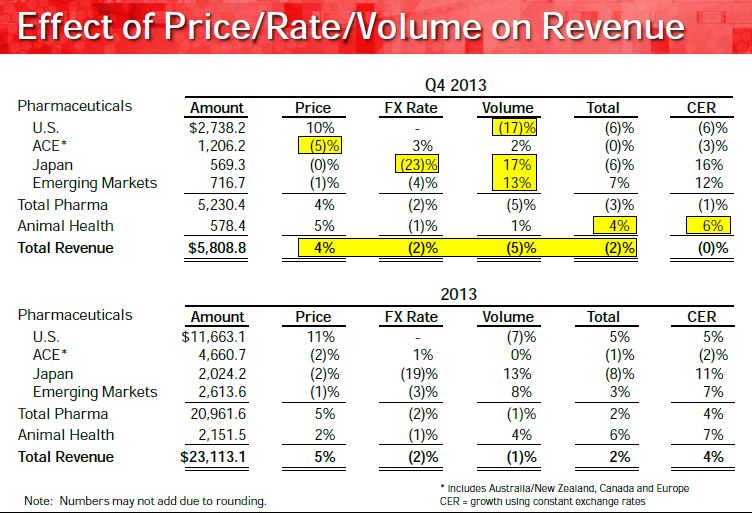 Probably a minor point in the wider scheme of things but it probably helped contribute to push the shares slightly down on results day.  Still, it has not been a technical disaster: I noted earlier this month that the share had formed a base in the low US$50s...

'Eli Lilly has a number of advantages over some of its big pharma international peers, almost all of whom are facing similar patent expiry issues.  As discussed it has a forward pipeline, it has effectively no debt, pays a 3.8% yield (well covered by the cash flows: free cash flow yield is well over 7%) and recently initiated a US$5bn (or c. 9% of outstanding share capital equivalent) buyback.  In short, for some ballast in a portfolio, it is dull but worthy, has positive optionality in its business via the new drug treatments...'

Email ThisBlogThis!Share to TwitterShare to FacebookShare to Pinterest
Labels: pharmaceuticals