Citi - below hopes but not a disaster

Three months ago I called Citigroup shares at US$50 'there or there abouts'.  Since then the shares have edged up in a good underlying market but, after some dull-looking Q4 numbers at face value today, is trading down in the US$53s in early trading.

Citigroup kicked off its presentation document review of Q4 with this striking observation:

It is possible to see the impact of a slower US mortgage market and market share losses in the capital markets on the aggregate numbers.  Thanks to a reduced cost of credit and reserve releases, earnings metrics were up in the double digits.  Ex this though, the most striking aspect of the aggregate results was just how dull (low single digit change) they were on the revenue, expenses and asset lines. 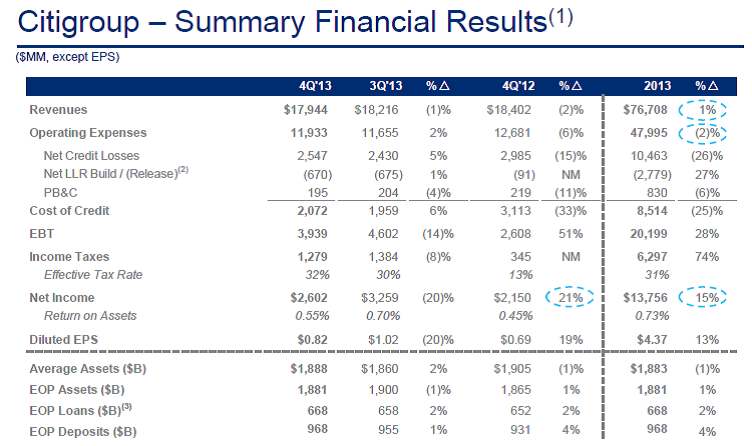 Pre-results there was considerable commentary about the impact of the company's important global Citicorp banking franchise, especially as emerging markets have been more volatile recently.  Apart from Latin America - and even here the impact was very modest - there was little evidence of this (yet). 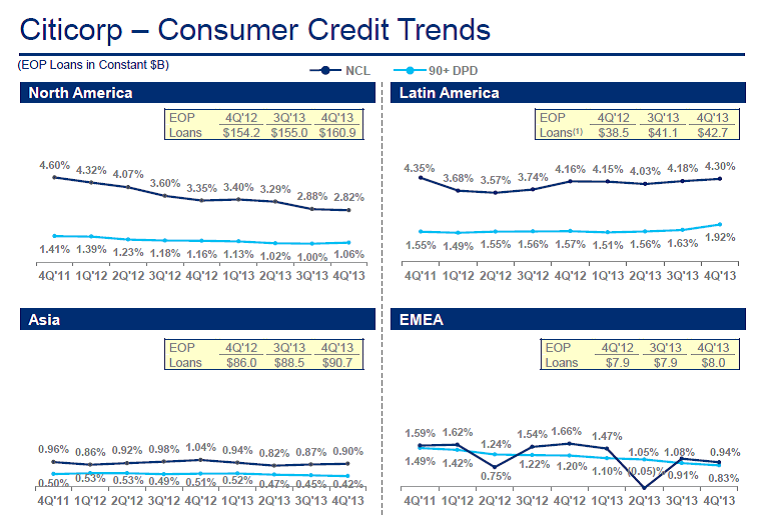 Another striking chart was the continued compression of the 'bad bank' element Citi Holdings, where assets compressed by 25%  in size over the last year, although general deleveraging of the overall Citigroup meant that the division still accounted for 8% of Citi's overall assets.  Note that nearly 85% of Citi Holding's assets are based in North America, with the majority of these mortgage assets. So some scope for disruption still from these assets...but it is getting smaller and overall has been managed well by the Citigroup management. 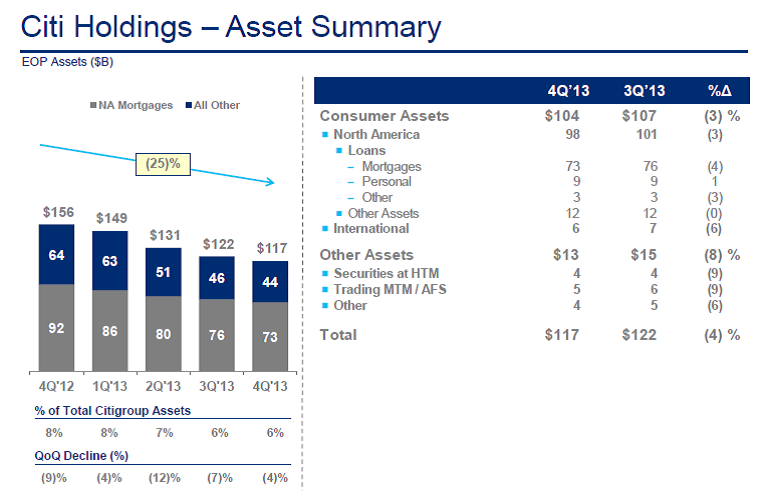 Overall, Citigroup is heading in the right direction. Core book value of the share at the end of the quarter was just over US$66 (up around 8% on the year) and the return on equity for the quarter was 7.1%, which was a little below the 8%+ levels achieved in the first half of the year.  Interestingly US$66 multiplied by 0.8 (the 8% return on equity) gives just under US$53/share which is pretty much the prevailing share price.

So it would be easy to conclude that Citi is there/thereabouts in terms of share price - a conclusion not woefully dis-similar to a conclusion I came to for Goldman Sachs earlier today.  Citi does retain some differentiated exposures though such as the internationalised nature of the Citibank exposures and feels slightly less correlated with the markets per se.

Of course for real upside the company needs to boost its return on equity to 8-10% sustainably.  Clearly the still reasonably recent CEO change has been designed to just do that.  Citi remains my gut-feel preferred play in US-listed banks...but there is probably no need to rush into the shares quite yet.  A bit of macro/market volatility will give you that opportunity.