A few days ago I wrote a posting, following the 2013 GDP print, that China-watchers would be better off looking at the interbank rates and the Shanghai bourse level for insights into the psychology and sentiment within the country. Well thanks to some well-timed People's Bank of China interventions, the interbank rate has fallen over the past few days and the Shanghai bourse has pushed back above the 2,000 index point level (as noted here).
But now some more challenges.  As the Wall Street Journal notes:
'HSBC and Markit released data Thursday that show conditions in China’s manufacturing sector deteriorated for the first time in six months in January. The HSBC flash China purchasing managers index stood at 49.6, below the 50 mark that separates expansion from contraction'.
The Chinese economy may be becoming more consumption/domestic-centric and less export/manufacturing-centric but the latter grouping still matters hugely.  Looking at the details...most of the inputs into the data are decreasing with new orders, backlogs, input prices and stocks all showing a negative impact change of direction. 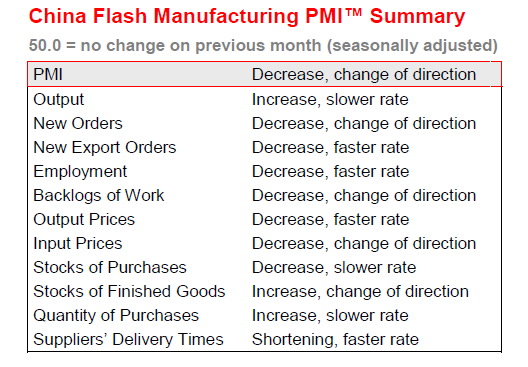 That's not good - but perhaps understandable if it could be linked to the rise of the Yuan and mixed global economic conditions for manufacturing exports.

There are two differences in China though with this data.  First - as shown below - Markit/HSBC cite 'cooling domestic demand conditions'...and second, the possibility of policy stimulus by the Chinese authorities:

"The marginal contraction of January’s headline HSBC Flash China Manufacturing PMI was mainly dragged by cooling domestic demand conditions. This implies softening growth momentum for manufacturing sectors, which has already weighed on employment growth. As inflation is not a concern, the policy focus should tilt towards supporting growth to avoid repeating growth deceleration seen in 1H 2013."

The 'cooling demand conditions' are likely to be linked to the on-going corruption crackdown which will have a particular impact on the investment side of the Chinese economy: infrastructure spend, construction and housing market inter-relations are notorious for their 'gifting' and special arrangements.  Additionally, as I noted at the above links, investment spend remain far too high a proportion of GDP...which is where the continued growth of the consumer sector matters.

China's government is continuing its high-wire balancing act of cracking down on corruption and shifting to a more consumption-centric economy.  Markit/HSBC have concluded correctly, further policy support to encourage Chinese consumers to spend will be forthcoming.

That's good news for companies suitably focused in that way.