Canon - taking my profits and moving on

I have been continually cautious about prospects for the Japanese printer/camera producer Canon since I first shorted the stock in mid-July...but it is time to take my profits now.  Hindsight being everything I should have done this in September (for a wonderful annualised gain) but Autumn strength in the shares allowed a further building up of the position as shown in the one year chart below.

The full year 2013 corporate numbers released today are typical Canon.  During the year there was a Y13.4bn improvement in the operating profit line...of which over Y217bn came from foreign exchange impact (i.e. benefits of a weaker Yen helping profit translation).  Of the 'industrial' profits decline of nearly Y117bn, over 80% came from the Imaging Systems division which is best known today for its digital cameras - an area of structurally high competition and hence margin compression. 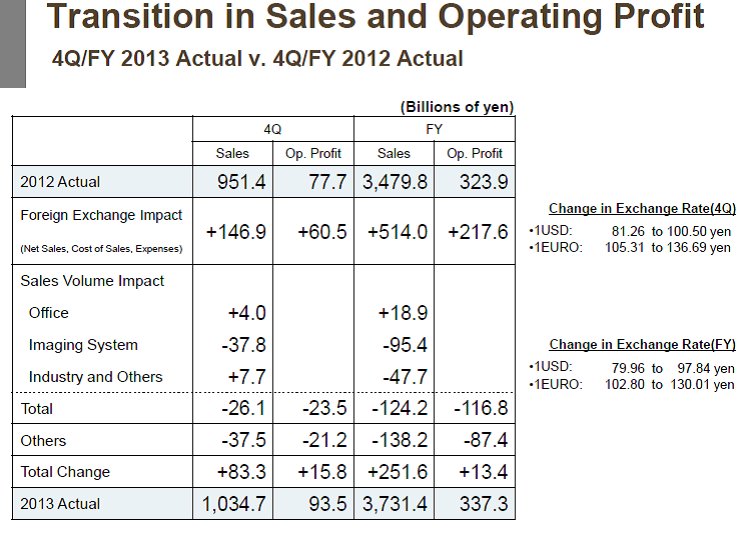 This camera divisional decline has not gone away.  In the company's projections for 2014 (shown below) they anticipate the division will see a further negative impact.  What is noteworthy though is that the foreign exchange impact is more muted AND the core Office division (printers/copiers where they are a world leader) keeps on pushing forward with its profitability, following a positive sequential move in 2013. 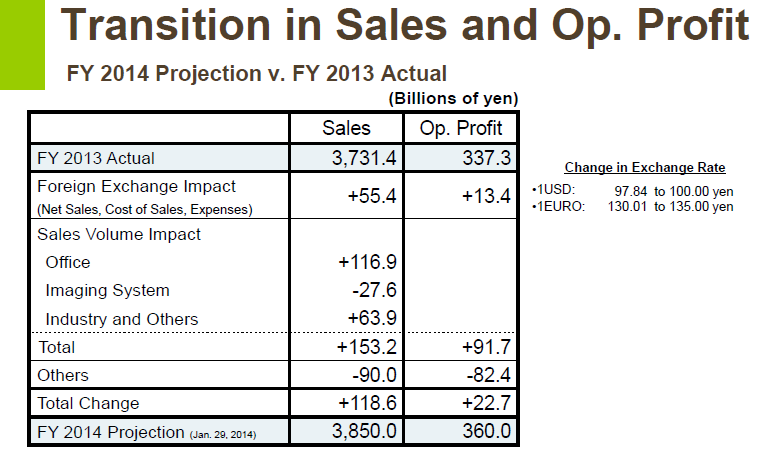 Now, we can debate where the Yen is going to go forever.  My own view can be summarised as the clear need for further Japanese QE/unorthodox policy will put downward pressure on the currency.  This is a net positive for Canon.  Additionally - and hidden from these numbers - is the rhetoric the company is using.  It is interesting that the traditionally cautious Canon management feel able to say that the 'recovery trend (is) becoming increasingly apparent':

In my previous write-ups, I have noted that Canon have always had a strong balance sheet and - at a 4%+ yield - an attraction for income holders too.  Using the 2014 projections made by the company (and putting the Office division on a x10 ebit multiple and the rest of the business on a x6 ebit multiple plus a deduction of central costs but an addition of the over Y800bn of net cash held by the company) I worked out a target price of around the current share price.

Support should start kicking in here around the Y3000 level.  I am taking my profits from shorting and moving on.  The company retains optionality via the use of the balance sheet or as an FX related play but I am going to watch from the sidelines for a while.